Theme: Famous Jacks are found in the circled letters jumping across blocks in the grid. 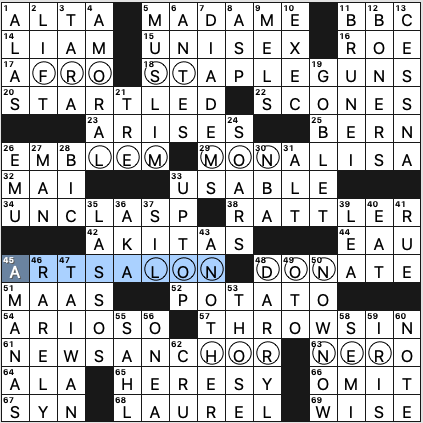 So that’s two real Jacks and two fictional Jacks, unless the last one is referring to the paleontologist who was the partial basis for Sam Neill’s role in Jurassic Park, but somehow I doubt it.

With so many Jacks in the world, why were these chosen? I would have liked to have seen some other element tying these together. Maybe make them all fictional (Jacks Bauer, Reacher, Ryan, Sprat, and Sparrow are available) or make them all real (Jacks Palance, Benny, Nicklaus, Black, or White have potential as well). Unless there’s something I’m not seeing in the chosen set, it just feels too random.

The fill is heavy on the 6s and 7s with a couple 8s thrown in (THROWS IN, STARTLED). I liked DIADEMS, RATTLER, UNISEX, GOBLET, BRUNEI, TAIWAN, and “NOW, NOW.” But there isn’t anything especially sparkly, and the gluey bits were noticeable: MAAS, ONE-A, CRU, OTO, SIL.

I’m okay with the theme concept, but I wish it was a bit tighter. Three stars. 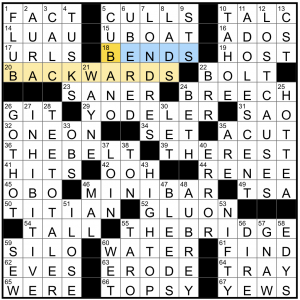 The theme entries are split into two parts (two on 2/2/22!), and the preposition in each phrase is suggested by positioning. The highlighted entries in my grid are BENDS over BACKWARDS, and the theme plays out with A CUT above THE REST, HITS below THE BELT, and WATER under THE BRIDGE. We’ve seen other themes with positional words implied by grid positioning, and I usually enjoy them.

Fill I could do without: INHIBITIVE isn’t an inflection we see much of. I’d be OK to never see ILOSE or ILOST in another puzzle. There’s also a dupe: the awkward GOT HOT plus HOT TEA.

Guess who feels too sleepy to make sensible remarks about this puzzle now?

Editor: Erik Agard
Theme: The start and end of each theme answer form the word RED, so “red” is literally “enveloping” the answer. 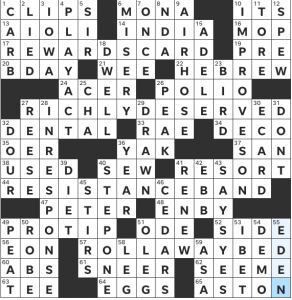 Happy Lunar New Year everyone! I love a timely theme, and this one is perfect for this week – the wordplay works on every level.  The theme answers are all solid phrases that I feel like I haven’t seen a million times in puzzles before – REWARDS CARD and RESISTANCE BAND are my favorites. It took me a while to see RICHLY DESERVED as I kept trying to put “well deserved” even though that doesn’t work with the theme at all. Plus, I had “air hole” instead of AIR HOSE for 9d [Tube for an underwater diver] which didn’t help matters. But that was pretty much the only hold-up I had throughout the puzzle. 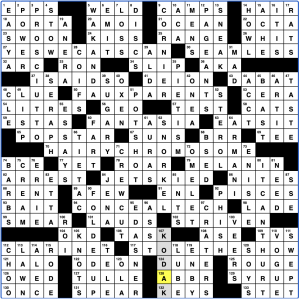 We’ve got a supersized AVCX this week from Aimee Lucido!  It was a nicely chewy 4.5/5 difficulty puzzle that took a little bit of time when it landed in my inbox last night.

“Off Broadway” is a great title that tells you exactly what’s going on with this puzzle’s theme clues.  One set of these clues various one-word musicals that something has happened to:

As to what’s happened to these, 117A explains that another answer in the grid STOLE THE SHOW (“Shined onstage … and what someone did four times in this grid”).  Each of the other theme clues in the grid is a common phrase that’s stolen each of the four shows to make a crazier phrase:

And then since there’s been stealing in the grid, the down clues for each of the clues that cross 14A, 58A, 88A, and 130A skip over the letters of each musical, cluing an entry for just the letters that remain (for example, OWL, CHE, TIS, and ATS) that become a different crossword-friendly word once the musical is back in place (HOWL, ACHE, IT IS, and RATS for my example above, which used HAIR).  It’s all very tricky, and manages to do all this with the various theme entries maintaining general placement symmetry, so it’s a feat of construction.

I always think about David Rakoff’s essay about the musical RENT from This American Life after his death.

other things I liked in this grid: FANTASIA, JETSKIED, CLARINET, and the delivery app SEAMLESS. 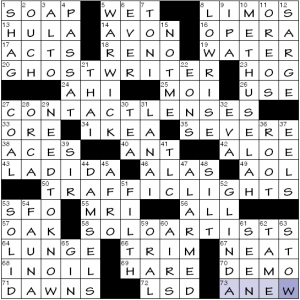 The wordplay here involves titles of films and components of moviemaking, alternatively parsed from familiar phrases.

So, two people and two objects. Good balance. One point: ghostwriter is typically one word, but a minor typographical adjustment seems fine to me.

A very workable theme, a clean grid, and friendly-level cluing. 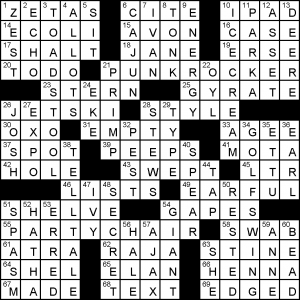 Today’s puzzle by Susan Gelfand features a more oblique than normal Wednesday theme. All of the answers have “?” style clues where each answer ends in (broadly) a seat that in the phrase aren’t literally seats, but are reimagined to be such. They work, more or less, though for instant PARTYCHAIR was a bit of a clunker to end on.

In contrast two the theme, the pinwheel theme entry arrangement makes for a very early week gird with a lot of small, easy to fill sections. The entries skew heavily to “Scrabbly”, but it mostly works: choices like JETSKI, CAJUN and AJAX made it feel a little less gratuitous. 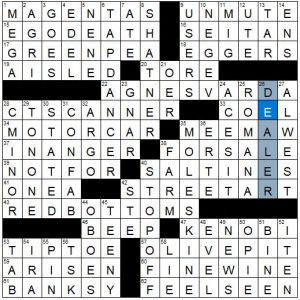 I often forget to look at bylines before solving. I’m not sure I could describe it in a responsibly accurate way, but I can certainly recognize Anna Shechtman’s puzzles within a few clues. This is as emblematic of her style as any I’ve done lately, and I was pleasantly surprised with my time because there was clue-driven resistance in just about every area.

Cool-looking themeless grid – at a glance seems like there should be 15s running across but instead we’ve got dense stacks in the middle and 8- and 6-stacks in the corner.

(Admittedly picky) nit pick: I didn’t love the IN ANGER/TO NONE/NOT FOR/ONE A/C MINOR confluence in the western area, but none are out of place on their own. I did chuckle entering NOT FOR [39a- Against] — it feels like that’s more often the clue for “against” or “anti” than in the grid.

The toughest spot for me (and my finishing area) was in the east, where I had to guess (and surprisingly got on the first try) the DE- of DEALER [26d- The protagonist of the TV show “High Maintenance,” e.g.], COEL [33a- “I May Destroy You” creator and star Michaela], and AGNES VARDA [22a- First female director to receive an honorary Academy Award]. I certainly have some learning to do, though TV and movies will always be a weak spot for me. I do think I’ve seen Michaela Coel in a USA Today puzzle and just haven’t learned her name well enough yet (obviously).