Today’s Fireball is a contest. We will post the solution after the submission deadline has passed.

I knew what the theme would be right from the title, or at least, I had it down to two possibilities. Would the extracted letters be Ts or Es? It turned out to be Ts, but it still took me a while to nail it down.

The missing Ts came from familiar phrases where one of the words sported a double-T which became a different word with those letters removed. 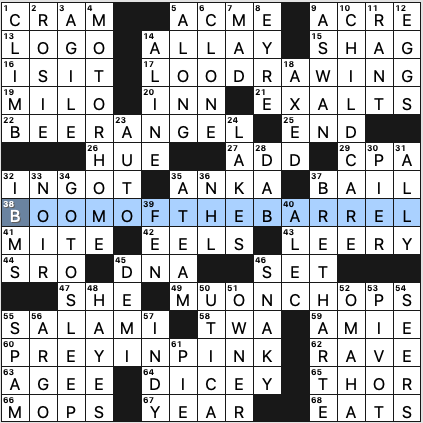 I enjoyed these. The first I uncovered was BEER ANGEL, but it didn’t help me see the light. It was BOOM OF THE BARREL which provided the satisfying aha moment I needed.

We’ve been sorely missing some sparkly fill this week, and Lynn delivers in spades with MOTORHOME, BRET HARTE, CHILD CARE, and its apt partner, “GO TO SLEEP.” 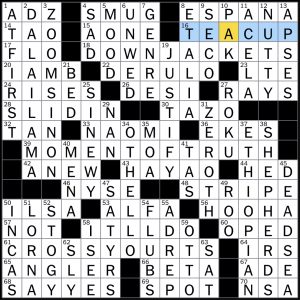 There’s a whole lot of clues that don’t appear to make any sense with the answers in today’s grid.  There’s a reason for that, spelled out at 61A:

There are a ton of clues in the puzzle that make more sense once their lowercase Ls or uppercase Is are “crossed” and become Ts:

The way that these read as valid (if slightly odd) clues without their respective Ts/Is is so well done here. 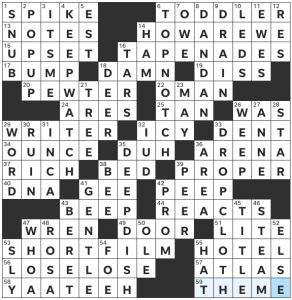 Hope all the chemists out there aren’t too disappointed by the lack of acids in this puzzle! I loved all the theme answers in this puzzle, each one of which made me happy to think of when it came to me. I might even say this theme is… TOP NOTCH (haha).

Those corners in the top right and bottom left of the puzzle are fabulous. Both stacks – TODDLER/HOW ARE WE/ TAPENADES and SHORT FILM/LOSE LOSE / YAATEEH are beautiful and there isn’t a word that I’d want to be different. However, the puzzle feels incredibly segmented. The only way from the top half to the bottom half is through a narrow channel of three letter answers, and the top left and bottom right corners are very closed off as well. On one hand, increasing the separation allows stronger fill because there are fewer constraints as words don’t have to cross as many theme answers. On the other hand, the grid feels choppy – there aren’t more three letter answers in this puzzle than normal, but because they are concentrated in the same area, it can feel like a lot. As someone who solves USA Today puzzles a few times a week, I like when the grid design is switched up, but like anything in crossword constructing it’s all about trade-offs.

Theme: Each theme answer includes an acronym as its first word (the initials of the puzzle’s title) that has added one letter to a common word or phrase. 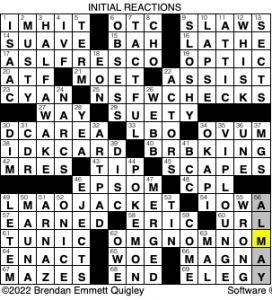 As per typical BEQ, this puzzle was loaded with creative themers. I was particularly fond of the near-reference to a wild card in IDK CARD and the hilarity of OMG NOM NOM. I wasn’t entirely sure if NSFW CHECKS was meant to be a play on NSF checks and felt like that was a more obscure reference.

In general, I felt like this was really nice. The diagonal staircase through the middle made for a fun breakup of the puzzle, though it was interesting to see how ASL FRESCO and OMG NOM NOM seemed to be the gates to where the upper right half of the puzzle met the lower left. I’d be curious in seeing how BEQ constructed this to see how much one side affected the other as it was coming together.

Some of my favourites for this grid include:

THEME: Phrases whose words end in something you’d find on a ticket to a sporting event, say. 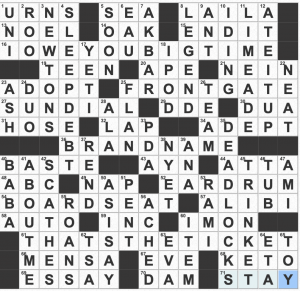 Took me a while to see the theme after I had filled this in completely. Despite the explicit instructions in the revealer, I did not look at the end words collectively. If you do so, there are some of the things you would indeed see on a standard ticket. I’d be lying if I said this one excited me.

I really liked SLEEP DEBT as an entry. It’s not familiar to me, but it’s a phrase I’m happy I learned.

A couple things I wasn’t too keen on were BOARD SEAT duping the title (Boarding Group), especially because it’s a themer. Also SUNDIAL and EAR DRUM were difficult for me not to mix in with the themers, visually speaking. That’s probably just me though. I feel like whenever I solve on the Universal webapp, I’m slightly more cantankerous. 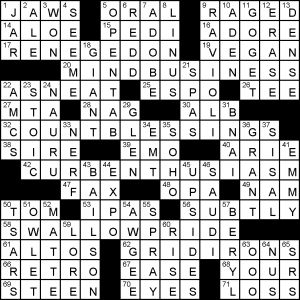