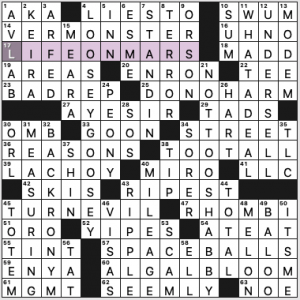 Interesting puzzle, with all sorts of fill that pops up rather seldom in crosswords. Among my fave fill: The new-to-me VERMONSTER oversized ice cream sundae, Bowie’s LIFE ON MARS, the Hippocratic “first DO NO HARM,” Mel Brooks’ SPACEBALLS, the dreaded ALGAL BLOOM, BACKRONYM, Anne MEARA, LOOSEY-GOOSEY, NOT TOO SHABBY (and I forgive the TOO TALL crossing because I enjoyed both entries), and UNDERSELL.

Least liked fill: past-tense verbing of an interjection in ARFED.

Overall assessment, NOT TOO SHABBY, 3.8 stars.

This a lovely debut puzzle from Ana and the Inkubator team! I hope to see more of Ana’s work, especially if they’re as smooth as this one.

Each theme answer has the letters PACE with the order changed. 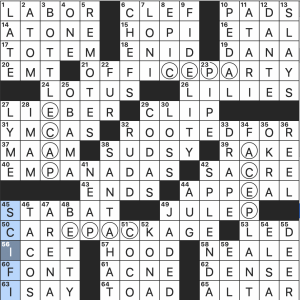 I didn’t realize until I typed that out that each PACE spans the two words. It’s a solid accessible theme, well-executed. Nice!

What I didn’t know before I did this puzzle: see above re: Jarritos. I also had never heard of LONI Love or Café Mocha radio. My whiteness is showing.

Theme: Two-word food items where one of the words is also a famous comedian’s surname. 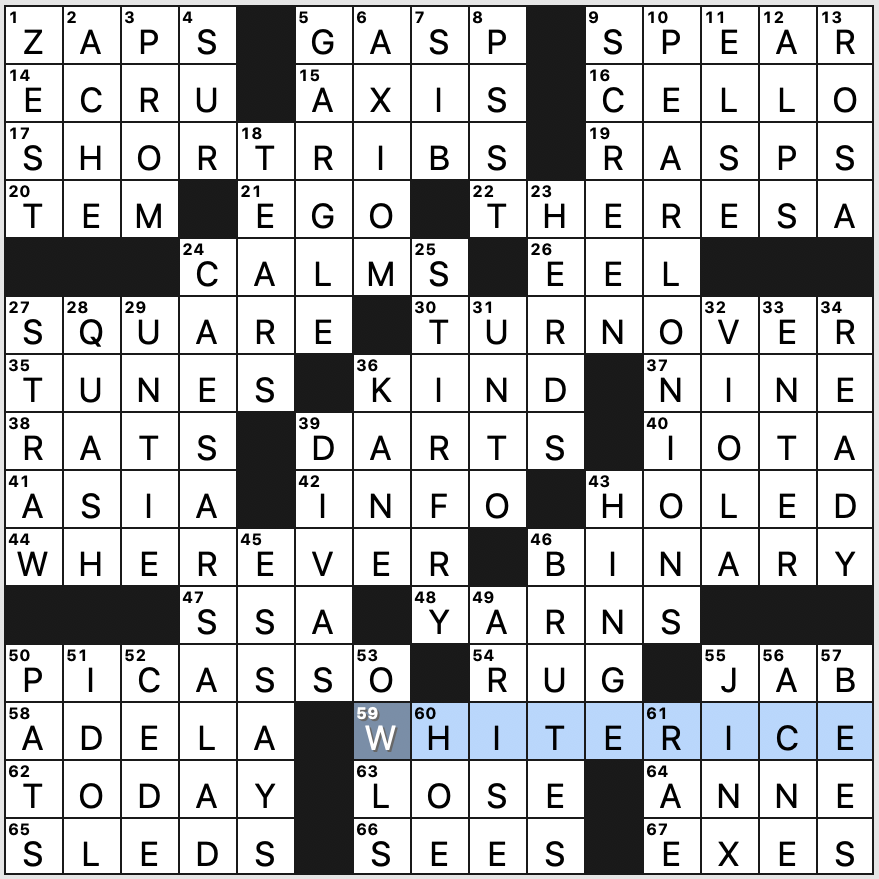 I guess I wasn’t paying too close attention to the clues, because I only just realized the comedian angle. At first, I just thought they were famous people in general, but this adds an additional layer of constraint that matches with the title better and makes more sense. It would have been nice if some more recent comedian names could’ve been used though.

Moving to the grid, it feels unusually open to me. This is verified by the fact there are only ten 3-letter entries which is quite low. Yet it’s still a clean, smooth grid. Highlights include TURNOVER, WHEREVER, STIR-FRY, and PICASSO. Also: GARGLE, JINX, and BRUTES.

A smooth, open grid with a pleasant theme and strong fill throughout. 3.75 stars. 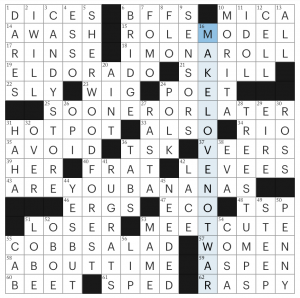 Happy Friday, folks! Long fill was very lovely in this puzzle, and the only short fill I didn’t like was ERGS, ESSO, MAME, and EIRE.

ROLE MODEL, IM ON A ROLL, SOONER OR LATER, ARE YOU BANANAS, MEET CUTE, ABOUT TIME, CANDY STORE, RUGRATS, HOTPOT, and MAKE LOVE NOT WAR is some impressive sparkle density!

Theme: Each theme answer includes KEG in it, making each of them literal storage for a KEG. 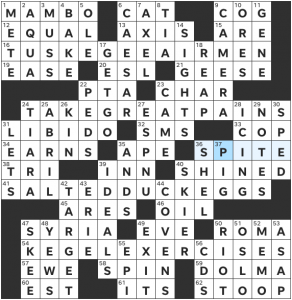 I’m a beer-lover, so I was sold on this puzzle because of the title alone. TUSKEGEE AIRMEN was a great themer, and I was thrilled once I got the T off of 1d [“___ out (distribute)”] METE. Both TAKE GREAT PAINS and KEGEL EXERCISES were clued very clearly, and SALTED DUCK EGGS rounded out this packed set of 14s really well. I did think that it was interesting that KEGEL EXERCISES was the only themer in which KEG didn’t span across two words though.

Much like yesterday’s USA Today grid, we have a diagonal pack of threes through part of this puzzle, but I appreciated the ways in which the themers opened it up so it didn’t feel super segmented. The tradeoff in having four themers that are 14 letters each becomes that there weren’t many answers over six letters.

Some Friday faves for y’all:

Overall, the fill in this grid was really rich, and I enjoyed just thinking through each clue and answer even after I finished the puzzle. 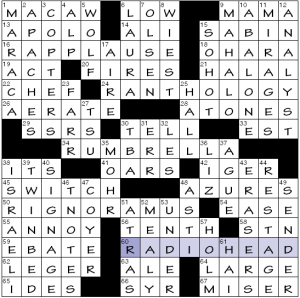 Maybe I’m overthinking it, but I’m not sure I fully understand the theme.

Is there a more concise and clear way to explain this theme?

A mildly confusing crossword, but a decent solve.