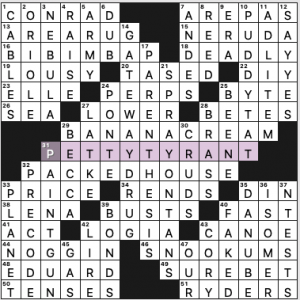 I like the ne*u*a echo of NEBULA and NERUDA. (I’m sure I’m not the only crossworder who picks up on such things.) I also like the echo of recent discussions complaining about food from other cultures being too difficult in terms of vocabulary—BIBIMBAP! AREPAS! BANANA CREAM! (I’ll bet banana cream pie is a weird foreign concoction to much of the world.)

Did not know: 48a. [Russian writer and dissident Limonov], EDUARD. Here’s Wikipedia, if you don’t know the name and would like to read up a bit.

4.25 stars from me. Good night, and welcome to the weekend. 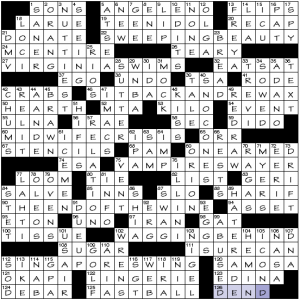 Simple concept here. Phrases containing a single letter L have that replaced by a W for punny results.

These are … okay. It’s a crossword that happily chugs along until it’s completed.

Anyway, that’s all I’ve got for this one. On to the Stumper! 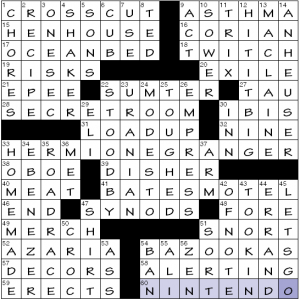 Once again, a puzzle that I wasn’t sure I’d be able to finish. More than other Stumpers since I’ve started recapping them for FiendCo, this one seemed especially resistant to even grant toeholds at the outset.

Slowly I made some inroads in the southwest and then the northeast, such that I was able to guess at the answer to the spanning central entry, whose identity came as a surprise to me. 33a [Best female character of all time, per a “Hollywood Reporter” poll (2016)] HERMIONE GRANGER. On the other hand, it is a poll and subject to, among other things, a recency bias.

I kept cracking at the shell of this thing until it finally revealed all its fruits. The southeast was next to fall, and finally I powered through the northwest. Despite the one 15-letter entry linking things up, it really felt like five separate puzzles to conquer.

Have a listen to my favorite shakuhachi album, if you like, for a meditative Saturday morning. 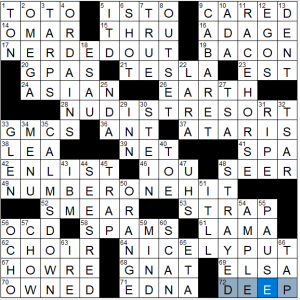 Our theme answers all feature the letters of the word “nut” bracketing the rest of the entry – a nut-shell:

Fun theme set for my money. The first and fourth themers break the key letters N-UT, while the middle two break them NU-T, which is nice. In general, there are far far fewer new-to-me entries in this one. Small bummer