When I first figured out the trick to this puzzle – that it’s a STAR WARS / STAR TREK tribute Schrodinger puzzle – I laughed out loud, showed it to my husband, and said, “Oh nooooo!” I know so little about the two franchises (or which character goes with which one!) that two of his favorite games are (1) to give me a character and see if I know if they’re from STAR WARS or STAR TREK and (2) to ask me for the rough story of, say, STAR WARS, based just on what I’ve absorbed from cultural knowledge. He will never let me forget the time I told him about Hans Olo. In my defense, though, who names their kid Han instead of Hans?! Okay, time to dig into this puzzle’s theme-related fill, to the extent that I understand it! 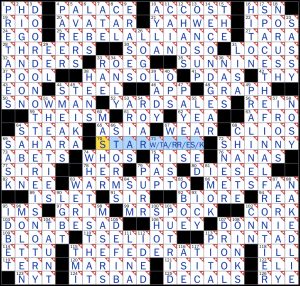 70A: STAR WARS or STAR TREK [The better of two major sci-fi film franchises?] – Wow! A Schrodinger puzzle is tough to pull off, but this is excellent. 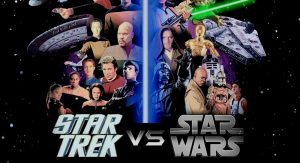 So, a Schrodinger puzzle with a lot of parallel, theme-related fill. Wow! I’m still not quite sure which one of each pair goes with STAR TREK or STAR WARS, but I’ve certainly heard of them all (except for the sides, maybe). Impressive! What did y’all think? Let us know in the comments section below. 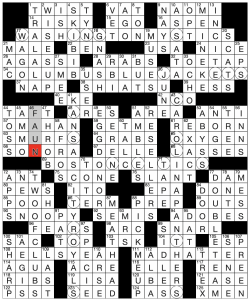 From a construction POV, the finds for this puzzle are extremely impressive. I think that may go under-appreciated, but it’s quite difficult to find words within phrases like this. Finn Vigeland had one in the NY Times that had breeds of cats and dogs running vertically all running through the phrase IT’S RAINING CATS AND DOGS, and I constructed one that ran in Universal which had types of grapes running vertically passing through the phrase THROUGH THE GRAPEVINE. I remember how difficult it was for me to find viable phrases that contained the words, but neither of those two puzzles had the added element of looking for team names within team names. Bravo!

This puzzle will definitely play different for sports fans than it will for non-sports fans. I am in the latter group. Not proud of my lack of knowledge, but I am the last person you want to use your phone-a-friend lifeline on if you’re handed a sports trivia question. One person actually trolled me in the comments on this blog some time ago, making fun of me because I was in the “o.ooooo1 %” unfamiliar with the name of a certain sports team (in turn, I pondered the percentage of people who would create a fake email address to troll someone blogging about a crossword, positing that that percentage would certainly be even lower).

One of my favorite Jeopardy! clips ever… this is my type of peeps:

Even still, I was able to uncover KANSAS CITY ROYALS with no crosses! COLUMBUS BLUE JACKETS, on the other hand, I am unfamiliar with (needed a lot of crosses). I’m pretty sure I’ve heard of all the others. Is the WINGS a hockey team? Wait, no. That’s the Red Wings. The WINGS is another WNBA Team… hold on. Mind blown! I just realized there is another layer of constraint in the theme. It’s not just random sports teams within sports teams. They are all within the same sport/league/genus/species etc. Wowza!

So, very impressive. And there’s a chance that a non-sports person like myself may have enjoyed it more as I had more of a puzzle to figure out and couldn’t simply plunk in the themers.

Anyway, in the fill I remember there being some good stuff:

I wonder what’s in store for next week on Super Bowl Sunday? See, at least I knew that game is coming up! I’m in some pools. Not sure what teams are playing though… 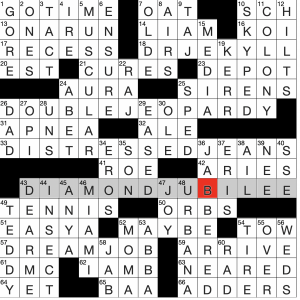 Goshdarnit. I was so close to breaking the three minute mark, which I’ve only don a handful of times. Got hung up on DIAMOND JUBILEE. Really wanted JEWELRY or something like that. Though I do think we should start using the word JUBILEE more often in everyday speak. That’s a fun word.

Fun phrases to uncover in a very standard no-frills type theme. Made more fun by some delightful clues in the fill:

Not much else to say about this one! Ideal Universal fare.

Theme: Synonyms for “walk” are found in the circled squares on either side of a black square (a.k.a. a “block”). 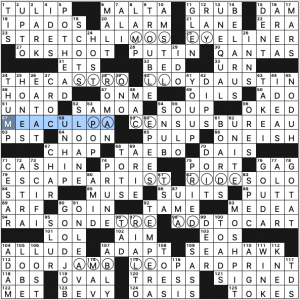 There’s no wordplay in a theme like this. It’s strength comes (or doesn’t) from the strength of the individual entries, and this is a strong, fun set with nice, modern touches here and there.

I would argue, however, that the “walk” words don’t go “around” the block as much as they go over it or through it. To go “around” it, I’d say there had to be one of the circled letters either above the block or below it. Maybe that’s a little nit-picky though.

Aside from the theme we get to enjoy a lot of fun fill here like POTHEAD, BELARUS, “GOOD JOB!,” ON LEAVE, MOSH PIT, “OK, SHOOT,” RIALTO, and SEAHAWK.

Do we really want IPAD OS in our grids? I mean, I’ve been using Apple products since 1986, but can’t we be satisfied with IOS? I guess the phone and table OSs have diverged, but still.

Theme: Each theme answer include THAW (in reference to “melt” of the puzzle’s title), and all are also Down answers. 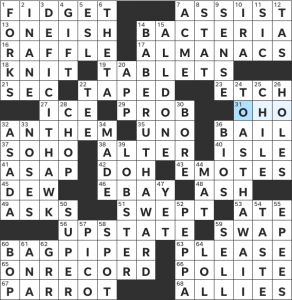 It took me forever to spot THAW in these theme answers, so they weren’t much help as I was solving, and the O of TOAST HAWAII was my last completed entry. I thought that these were a nice set of themers though with two 11s and a 13, all going down, which was also pretty fun.

Generally, this felt like a pretty wide open grid that came together really well. BACTERIA, ALMANACS, BAGPIPER, and ON RECORD were all really fresh (not sure anyone has ever described BACTERIA that way before). Additionally, there were no names in this grid, aside from 61d [“___ Luisa jewelry”] ANA and 52d [“‘___ Pig’ (children’s cartoon)”] PEPPA, which was different.

Short and sweet from me today, but I really enjoyed this puzzle.

We’re approaching ONE-ISH as I’m writing this review, and TOAST HAWAII sounds pretty tasty to me right about now.