Theme: Familiar(ish) phrases that have the initial letters of Q and B. The revealer is STARTING QB (60a, [Brady or Mahomes, and a hint to 17-, 31-, 37- and 45-Across]). Oh, so close! As of last week, Tom Brady is a STARTING QB no longer. Of course, it being Super Bowl week, the clue could have offered up Sunday’s starters of Joe Burrow and Matthew Stafford, but I for one wouldn’t have known those names. 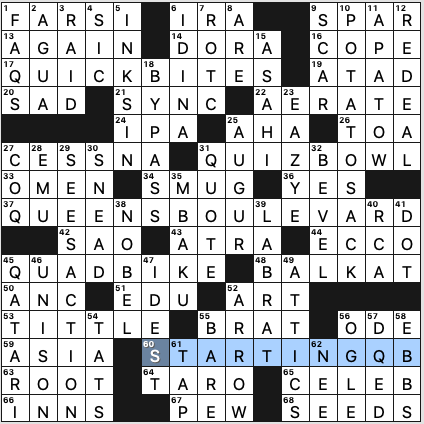 That works, and a I like the title as well. The interesting challenge here is how all the Qs are handled in the grid. QATARI is the nicest of the lot, but the rest are fine. What’s most surprising is that only one of the crossing Q entries has a U after the Q.

POTATO SACK and SEES ACTION are fun, lively entries in the fill. I also like LAB RAT and M’BAKU though I needed most of the crossing for that last one. Readers of the Black Panther comic will recognize the character as the sometimes-opponent of the superhero. 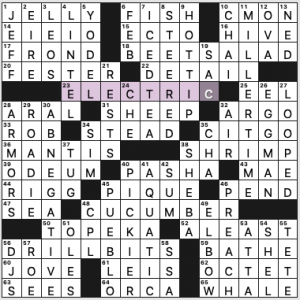 Lots of animals have common names that aren’t scientifically accurate. For years, we were told that “panda bear” was wrong because pandas weren’t bears, until eventually pandas were categorized as bears after all. (We await full bear recognition for the “koala bear.”) This theme examines some AQUATIC creatures in this vein:

Moving on to the rest of the puzzle, here’s my fave fill: MILLER TIME, AB NEGATIVE, PIQUE.

2.5 stars for me, after the judges’ deductions for the one-word JELLY FISH and non-phrase ORCA WHALE. 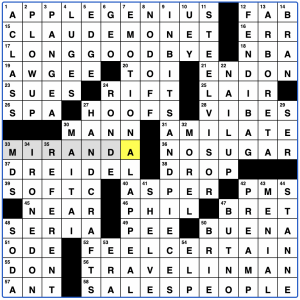 The new era of the AVCX kicks off next week!  KAC is here with another of his very solid themelesses to close out this era of things, and it was a doozy.  I’d expect nothing less – even his empty grids are beautiful. 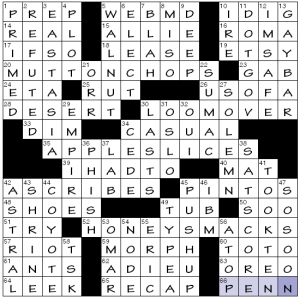 Phrases composed of x + y, where x is a foodstuff and y is a plural noun (or present tense verb) that might be witnessed in a skirmish.

Theme works, and it’s kind of nifty. The puzzle was a very smooth and quick solve; nothing too tricky or outré.

Editor: Mollie Cowger & Erik Agard
Theme: Each theme answer has the letters INC in it twice 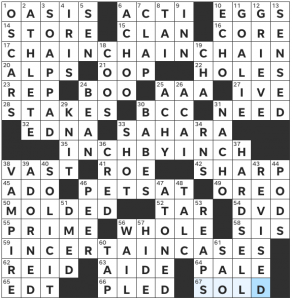 After getting the first theme answer, I thought that the theme of today would be repeated words that were also types of businesses – you know, like chain stores. But no! The hidden INC is a nice length and makes the theme more satisfying than just doing this gimmick with, say, the letters “co”. Also, I had “Chain of Fools” stuck in my head for the majority of my solve, which I’m not mad about. 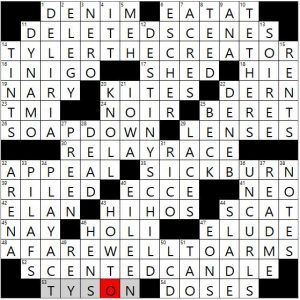 Just dropping the grid in and will have to return later with a better review, but in two sentences: lots of fun clues, bottom maybe a bit tougher than the top. See you later today!

OK, back: I had a good time with this one, particularly in the top half, and double particularly with the clues. Right to the highlights:

Few other notes: DESTINY’S CHILD is a lovely marquee entry. SOAP DOWN feels pretty dang green-painty to me. The EILEEN/TYSON crossing is a good example of how a square can be totally inferrable without knowing either answer (as I didn’t). 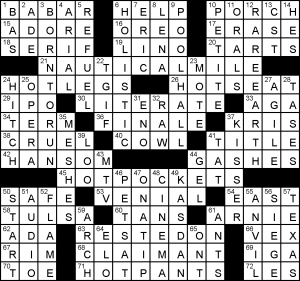 Peter A. Collins puzzle is plus-sized, but contains a quirky, minimalist theme. The left-right symmetrical grid features HOTPANTS with HOTLEGS, a HOTSEAT and HOTPOCKETS; flouting the convention to not repeat words in a grid. It is a remarkably neat little theme though.

The clues and answers are mostly quite straightforward today. Some of the more tricky spots, though, include: