I realized there was a rebus fairly early on and couldn’t figure out what it was. Once I saw it, the whole puzzle fell very quickly. It’s not a perfectly symmetrical rebus, which I prefer because it’s a bit more challenging. I enjoyed this puzzle!

The rebus is the word ICE in one square – hence the “little chill” of the title. Several of the theme answers feature two cubes. 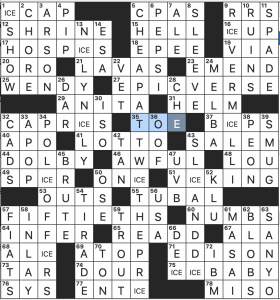 Lots of fun! I am not overly bothered by VICE KING because the rest works so well and was so enjoyable.

What I didn’t know before I did this puzzle: never heard of Kathryn Beaumont, although I certainly know her voice. Didn’t know that Sean SPICER wrote a book. Didn’t know that Eugene Levy voiced LOU the porcupine in “Over the Hedge.”

I can’t resist posting this because it’s one of my favorite movie quotes.

We have a word-swapping theme today in which the first words of familiar two-word phrases (or compound words) move to the ends. Since all entries are in the Down direction, these words are “flying south” as we’re told by the revealer FLIES SOUTH (32d, [Migrates for the winter, and a hint to the shift in the starred answers]). Further, these words that move are all words that can precede “flies”. 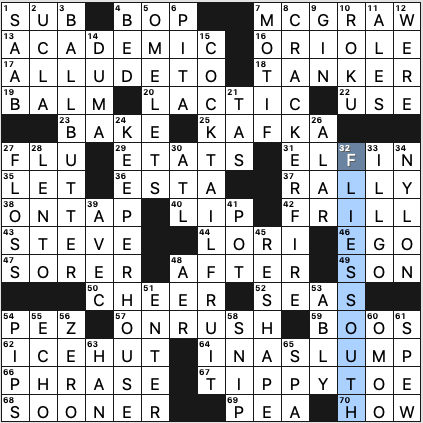 I think the intention is that not only do those keywords “fly south,” but collectively they are somehow “flies” that are in the south. I’m not so enamored of this idea since a house is not a fly, for example, but on the other hand, I was hoping for some other element to tie these entries together, and this did the trick.

It took me uncovering at least three entries before I saw the gimmick, so it was reassuring to have everything tied together with the revealer. Nicely done.

Not a lot of long fill today, just a couple stacks of 8s in the NW/SE corners, of which ACADEMIC and TIPPY-TOE stand out. IN A SLUMP ain’t too shabby either. I needed every crossing to get ALAR [Controversial orchard spray], though. 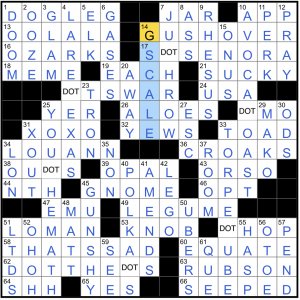 Last week we covered the importance of CROSS[ing] YOUR TS, and apparently we’re still on a careful proofreading kick at the NYT:

Replacing each I in the puzzle going across with a DOT for its corresponding down clue helps fit some oversized answers into the grid: 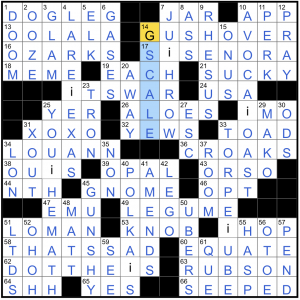 with every I in place

Editor: Mollie Cowger & Erik Agard
Theme: Each of the three theme answers is a thing to wish on. 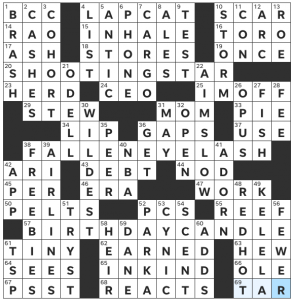 Cute theme! It took me a while to see FALLEN EYELASH since, solving from the top of the puzzle downwards, I was looking for that answer to be birthday-cake-related as I hadn’t seen the 57a clue yet. Plus, I had erroneously put in “swag bags” instead of FREEBIES for 38d [Promotional event giveaways], and not having the leading F in place made the theme answer harder to see.

The grid is symmetric except where it needs to accommodate theme answers of different lengths. Given that these are the three essential things to wish on in my mind, being able to have all three in the grid together is totally worth switching up the symmetry. Plus, losing the two black squares in the lower left corner gives us some extra long down answers that aren’t present anywhere else in the puzzle, which is fun.

THEME: Types of rocks can be anagrammed in the first word of common phrases. 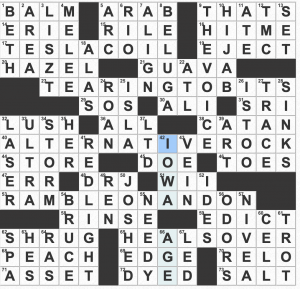 I’m not a big fan of anagram themes, especially when they’re this straightforward with no wackiness to bring levity to it. So this one falls squarely in that category for me.

I did, however, very much enjoy the revealer. A nice throwback with the Nirvana reference. The titular Rolling Stones make a sorta-kinda appearance too!

The hints in the clues as to what type of rock we should be anagramming were a cute touch. Perhaps unnecessary, but benign at the very least.

I don’t understand the clue for IOWA [State where Captain Kirk will be born?]. If Star Trek knowledge is needed to suss it out, then I don’t feel so bad for not getting it. Help!

2.75 stars from me today. Anagram fans would probably think this puzzle rocks though :)

Theme: Each theme answer uses only the capitalized letters within its clue as a word bank, which is nodded at in the “only” repeated in each clue. 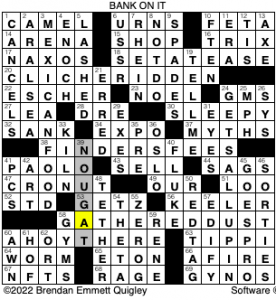 It took me until writing out this post (and reading BEQ’s notes again) to figure out exactly what the theme of this puzzle is, but I think it’s really clever and definitely a fun one. I’d almost love to see this again with another set of word banks. Even though I didn’t quite catch on until right now, I knew there was some anagram-adjacent move being made, and that did help as I solved. FINDER’S FEE fell into place first.

Outside of the themers, I enjoyed the wider corners in the upper left and lower right. I struggled with 2d [“Body of water that’s more desert nowadays”] ARAL SEA, especially with the crossing of 17a [“Largest island of the Cyclades”] NAXOS and 22a [“‘Ascending and Descending’ artist”] ESCHER. I struggle with geography in general in puzzles, and the added name here left me adrift for a bit.

In terms of my solve-process with this one, I was grateful for the middle of the grid, which I filled in first, creating an odd sort of dividing line between the left and right halves. The DRE-EXPO-SELL-OUR move descending through the middle made FINDER’S FEE really apparent. From there, I moved through the bottom of the puzzle before cracking that upper left puzzle I mentioned above.

Again, a great theme that I would love to see again just because it was both a fun one to figure out (despite any frustration) and because it is so clever. 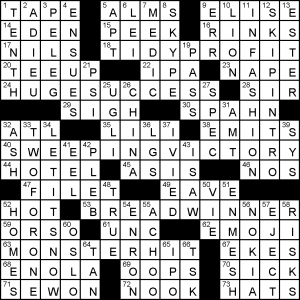 Bruce Haight’s LA Times puzzle has, loosely, five two-word phrases for triumph, and clues each with a matching vocation. BREADWINNER is repurposed, but I think the cute factor wins out over strict adherence to pattern. There is a mini-theme going on about the sport of curling, which is curiously timely given the turn-around time of the Times. Anyway, the clean-up crew get a TIDYPROFIT; the elephant trainer has a HUGESUCCESS; the curling team has a SWEEPINGVICTORY; the baker has a BREADWINNER; and the horror film producer has a MONSTERHIT.