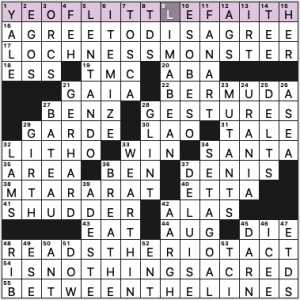 Oof! I turned this into a Saturday puzzle by considering an entirely wrong answer for 1a (“PEOPLE ARE SAYING…” based on that *EO start), slowing me down considerably. The second of the six 15s was a gimme for me, AGREE TO DISAGREE, but the other five all required tons of crossings to piece together. Just me?

Fave fill: YE OF LITTLE FAITH (though it really wants an “OH” or “O” at the front), LOCH NESS MONSTER, BERMUDA, *SHUDDER*, “IS NOTHING SACRED?”, BETWEEN THE LINES, WEAR THIN, LIMA BEAN, and FAN ART.

The two triple stacks of 15s have plenty of short abbreviations among their crossings, but nothing too dire. Each stack feeds into a couple swaths of the grid, so once you get a few footholds, you can make good progress. (I struggled to get good footholds early on.) 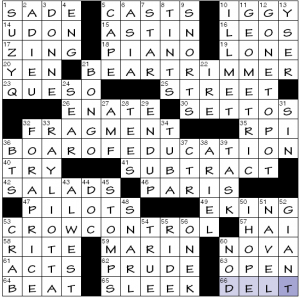 Okay: (1) two-word phrases with the first word ending in D, (2) that D is removed to reveal the name of an animal, (3) the new, wacky phrase is clued.

Theme is modest in scope but well-executed.

Oh, there’s a revealer that I didn’t notice until trawling the clues for the following section: 60d [Silent assent … or, in two parts, a hint to the three long answers] NOD, or NO D. No mention here of the faunal aspect.

And that’s where I’ll wrap up the write-up.

The INKubator crew said this puzzle was challenging and it is indeed on the tougher side for their offerings. I love indie puzzles that I know I wouldn’t see anywhere else and this is definitely an “only the INKubator” puzzle!

Each theme answer is a two-word noun clued as if each word were a verb. Easier to show than explain! The revealer is great. Wait for it. 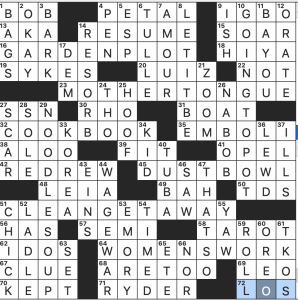 And the revealer which made me chortle: 64a [Antiquated gendered term for the duties done to maddening excess in this puzzle] is WOMEN‘S WORK. I love this. It’s a really good puzzle – lots of theme material without compromising fill. And the theme is layered with a serious message under the humor. The definitions give us both the standards women are held to and the ridiculous advice we are given when those of us in hetero relationships have the temerity to mention that the domestic work is not equitably divided. Warning: if you are male-identified, do not post a comment about how much work you do around the house. I already know it’s #NotAllMen. I’m married to a man who pulls his own weight (aka being a functional adult). We still have to deal with societal expectations. When our kid was young, we pretty much split the hands-on parenting down the middle. He heard “it’s great that you are so involved!” I heard “don’t you feel guilty about how much you’re working?” So do not @me about your domestic heroism. We are not giving cookies here. This puzzle gets it.

What I didn’t know before I did this puzzle: that Chiwetel Ejiofor’s ethnic identity is IGBO.

I didn’t pay attention to the theme during the solve, and I only saw the title afterward, so I didn’t really know what was going on with the circled letters. It almost looked like a word ladder, but not quite.

Once I had my aha moment, I thought the theme was cute. Each group of circled letters starts and ends with a P (hence the “split Ps”), and the letters in between collectively spell out SOUP. 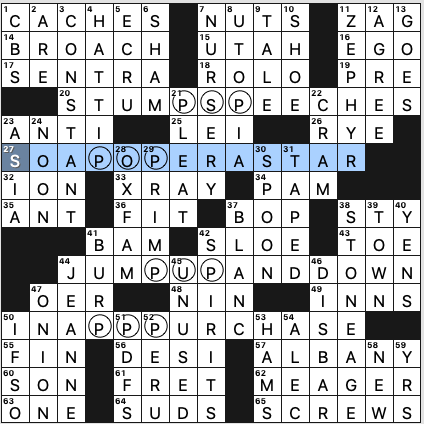 Clever idea, yeah? I don’t recall seeing anything quite like it, so points for originality.

Looking to the fill, ZEPHYR stands out as my favorite entry, along with STONE AGE, NURSERY, HAT TIP, and SPIRITS. I didn’t know the name of JEANNE Shaheen (D-NH), but here’s an interest factoid: She’s the first woman in American history to be elected as both a governor and a senator.

Good morning, and happy Friday!! Today’s puzzle had highs and lows, let’s get into it: 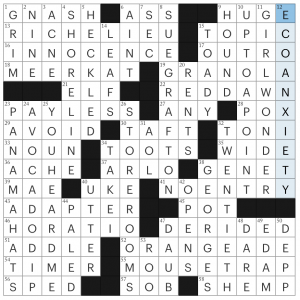 Theme: The first word of each of the theme answers is synonymous with kind, and there are four themers, making them “four of a kind.” 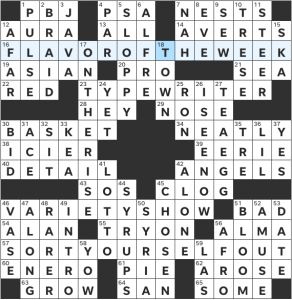 Four themers get packed into this grid. I love the funnies, so because of its clue, TYPEWRITER is my favourite in this pack. That said, I love that we got two grid-spanners in FLAVOR OF THE WEEK and SORT YOURSELF OUT. I didn’t figure out the theme until I solved it, but I really liked the title on this grid.

Grid-wise, this one felt packed with answers. The shape in the center was a nice concentration of black squares, and Brooke kept this pretty open around it, which was great. I was constantly ooh-ing and aah-ing as I took the tour through.

That’s all from me! This was a great Friday that felt really fresh and clean.