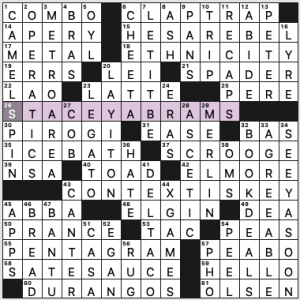 LAO again, this time clued as 22a. [People with a language of the same name]. I feel like I’ve seen the entry three times this week and I don’t do that many puzzles anymore. Do we have any Laotian solvers in the Fiend community?

Four stars from me. Welcome to the weekend! I know you’ll all have fun marking Abraham Lincoln’s birthday on Saturday. 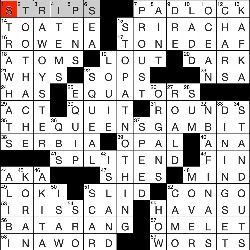 First of all, apologies for the lack of a time stamp on this one. No, I did not solve it untimed. (I almost never do that!) I just forgot to put it in the title of my draft of this post when I solved the puzzle more than a week ago, and I don’t remember how long it took, although I’m guessing from what I wrote later in the post that it was under 3 minutes.

Not everybody starts solving at 1-Across (and in fact starting there is often not the best strategy if you’re a casual solver), but I do, and I like when someone has put a great entry or great clue there because it sets the tone for the rest of the puzzle. I would say [Gets debriefed?] for STRIPS, which made me smile, qualifies.

On the whole, though, this puzzle felt too easy for Saturday. There were some clues that were intended to be tricky that didn’t fool me even for a second — for example, I think it might be time for a moratorium on using the word “canine” as a way to be tricky about things involving TOOTH or TEETH, as is done at 2D. 35A is also really easy if you know who Magnus Carlsen is, so one can unlock that big central entry with just one or two crossings. And I thought there were an awful lot of very straightforward clues for a Saturday!

I adored the clue at 17A [Like one who can’t even hit an easy pitch] for TONE DEAF, although I arrived at it too late to be tricked by it at all since the NE corner was the last part of the puzzle I got to. Also enjoyed the reference to “SHE’S a Bad Mama Jama” at 47A. I wish 46D had referred to the actual AKITA, Hachiko, the extremely good boy whose true story inspired a Japanese movie that in turn led to the Richard Gere film referenced in the clue [Breed in “Hachi: A Dog’s Tale”], because just try to think about Hachiko and not have your heart turn into a giant puddle.

The fill is pretty good overall — I just would’ve liked the clues to give me more of a workout. 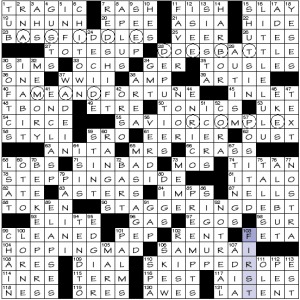 Nifty theme. I appreciate how the order is preserved in the parallel sets. The ‘plans’ of the title? I’m going to interpret that as the scheme of the puzzle itself. 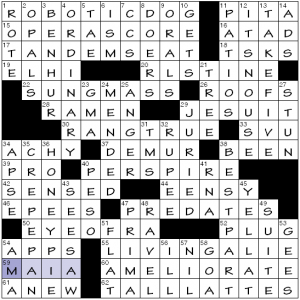 This one seems to have been quite the workout, and my longer time reflects that. On the other hand, I was listening to some absorbing music and not exactly racing through the solve.

Let’s start with the biggest holdups, aside from the regular starting deficit, where I try to find some decent inroads.

So my major problem areas were the swath cutting from the lower left to the right flank. As for the rest, it was the typical mix of inspiration and grunt work required for a Stumper solve.

And that’s it. No way for me to ascertain whether this was more difficult than other Stumpers.