We have a debut today, and oddly, we’re keeping with the basketball theme of yesterday. I wonder why these two puzzles weren’t saved for March Madness.

The revealer is BACKBOARD (37a, [Hoop holder, and a hint to the first four letters of each asterisked answer]). The indicated letters of each theme answer spell (backwards) a word that can precede “board.” 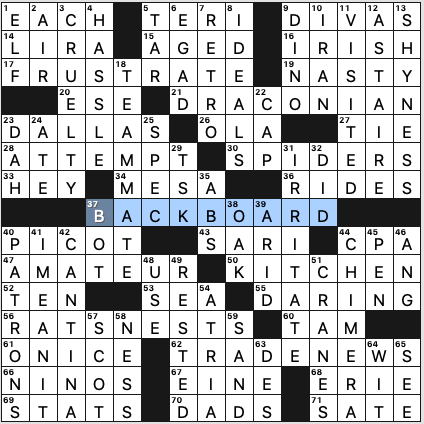 A nice set. The first one threw me for a moment. I thought, “What are we trying to spell with FRUS?” Then I had my aha moment.

It’s curious that those key letters weren’t circled, but on the other hand, I like the consistency of each “board” word being four letters long, thereby eliminating the need for any circles cluttering up the grid.

There are plenty of long entries (7+ letters) to enjoy. Topping my list are CHIMERA, AMATEUR, SPIDERS, CANTINA, and “I MEAN IT!” I don’t remember seeing PICOT [Lace loop] before, and I needed every crossing. Cruciverb lists it as appearing once (in the NYT) in the last six years.

A nicely constructed puzzle and a satisfying theme make for a fine debut. Four stars. 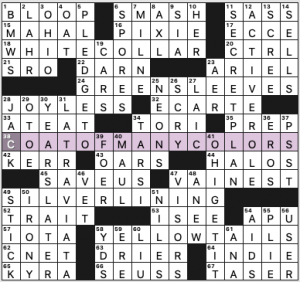 This 16-square-wide puzzle centers a COAT OF MANY COLORS as the theme unifier for a WHITE COLLAR ([Worker designation coined by Upton Sinclair], interesting clue), GREENSLEEVES ([Traditional folk song played by British and Australian ice cream trucks]), a SILVER LINING ([Upside, when down], good clue), and YELLOWTAILS ([Some sushi menu fish]). I did not know that Joseph’s technicolor coat was an [Envy source in Genesis 37…].

Fave fill: “OH, I GET IT!” feels fun. BLOOP SMASH SASS makes for a zippy first row. LA TRAVIATA and an ACTIVE ROLE are also solid.

A thing I want to talk about: Constructors in recent years have turned more to answers with a preposition tacked on, and I’m not loving it. PLEDGE TO? PLEDGE, sure, but with a TO?

Some tough vocab in the mix here, maybe making this play a little harder than a standard Wednesday, particularly for newer solvers: ECCE, ECARTE, geometric TORI, LAHR, TARSI, SCRY and SCREE. Plus I count almost 20 proper nouns, and name-dense puzzles often stymie many. 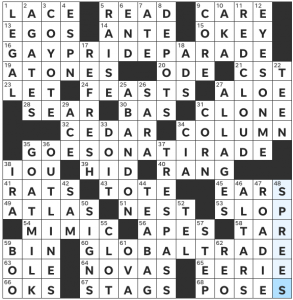 Cute theme today – a grade in class is a score, so the score is on the outer part of each theme answer, get it? It might have been nice to have a different letter split besides G/RADE somewhere in the puzzle, but I also don’t mind the consistency. GAY PRIDE PARADE is of course my favorite – between that and the clue for ALTARS  at 46d [Places where grooms might exchange vows], there was a fair amount of LGBTQ+ representation in the puzzle.

Lots of 7+ letter down answers today. I have never heard of chabichou cheese, so GOAT MILK was a total guess for me, and I tried to put in “goat’s milk” first before I realized it was too long. The puzzle had a few other food references too – 7d [Enjoyed roujiamo, e.g.] for ATE, 9d [Pineapple discard] for CORE, and 24a [Chinese New Year dinners] for FEASTS. That last one tripped me up a bit as I thought the answer would be a specific type of food! Also, EYES ON ME plus a COYOTE gave the top half of the puzzle a fun “get the kindergarteners to be quiet” mini-theme to me. 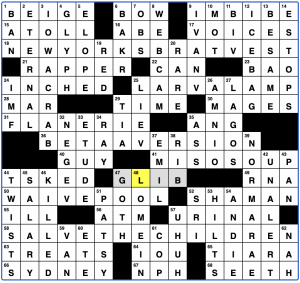 The AVCX expansion is here!  It’s fitting that Ben Tausig’s first puzzle in this new era is all about AV expansion:

Each of the more common phrases (NEW YORK’S BRAVEST, LAVA LAMP, BETA VERSION, WAVE POOL, and SAVE THE CHILDREN) has had its AV expanded, with letters spelling out “TRAIL” – not sure if there’s a fun reason for that (there wasn’t a clue or a note sent with the puzzle indicating any importance), but I did find it satisfying that it spelled something out. 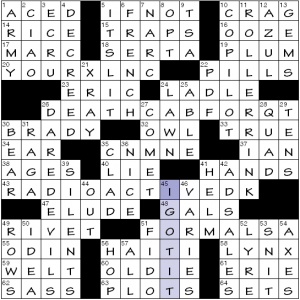 Well, would you look at the time? It’s gramogram o’clock again! I know! So soon, it seems.

In today’s edition of letters-sounding-like-words we have five theme answers, with the central entry needing no accessory words.

Some imbalance, as three of the theme answers end with a two-letter gramogram, while the first is a QUAD (28d [Squarish college green]) and the central one (very nice find!) has five. As good as 20-across is, I’d have preferred the consistency of using another 2-letter ‘homophone’ there. 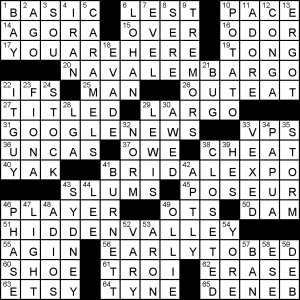 I managed to guess the revealer in George Jasper’s puzzle was HIDDENVALLEY despite not knowing that was a food brand of any kind. I already had VALE and GLEN (but not DALE) so it seemed inevitable. GOOGLENEWS and BRIDALEXPO were fun entries, with NAVALEMBARGO more staid. YOUAREHERE and EARLYTOBED are not thematic. 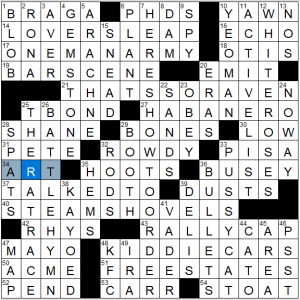