Theme: The letters D and C are inserted together into familiar phrases. 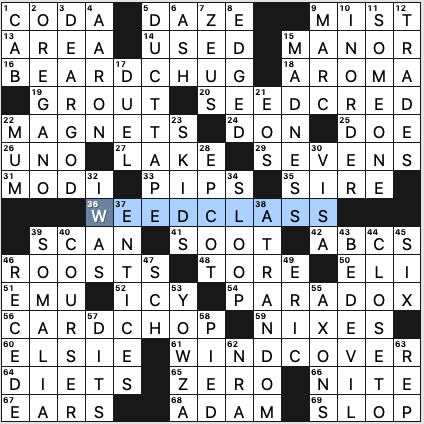 These were mostly groan-worthy puns, but I appreciate the wordplay. One nit I will pick is that the title doesn’t quite feel accurate. It implies (to me, anyway) that D and C already exist in a phrase and are then put together. The theme as is is more like “D.C. Added” (but that’s not a real thing).

Fill highlights include DEAR GOD and BEDEVIL (at appropriately opposite spots in the grid), DUCT TAPE, OREGANO, MAGNETS, SOMALIA, MADNESS, YOWZA, and PARADOX. 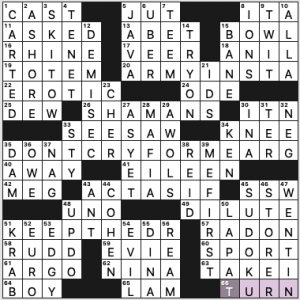 Hello! Amy filling in for Jenni tonight. I get the theme but I don’t see how the title relates to it. The theme entries involve “revolution” in that the ends of three themers sort of “revolve” through the grid, but while two of them sort of draw a 9, the third one would be a backwards 9. Here’s the theme:

Neat theme. I was perplexed after ARMYINSTA was parked at 20a, but the ending of DONTCRYFORMEARG was obvious and then the theme gimmick popped out at me.

Did not know this week’s “Peter Gordon tries to have all new clues” clue for KEN, 34d. [Yes, in Hebrew]. There’s a decent chance Jenni would have known this one. 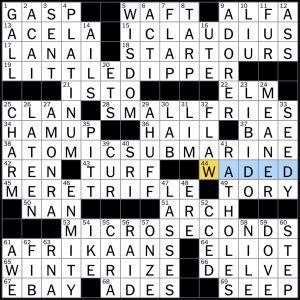 After a few weeks of trickier themes, this Thursday’s NYT felt a bit on the slighter side, though in a good way (and it’s a debut!  Congrats, Aaron!):

The attempt at a narrative here is charming, though I really want a Sunday-sized version of this puzzle, since the pun quotient here feels VERY Sunday and this was very charming.  As it is, I blasted through this in under six minutes, but had a great time.

Editor: Erik Agard
Theme: The theme answers include the letters ROUGH, and they cross at the U to create a “rough patch”. 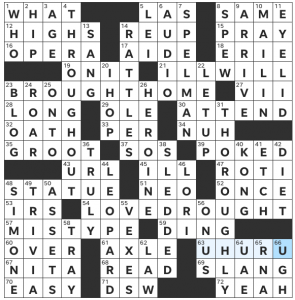 Busy workday today so I only have time for some quick notes on the puzzle! 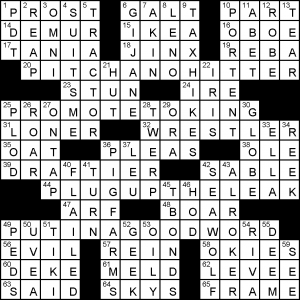 I think Bruce Venzke’s concept is fine, but the theme as executed feels forced on several levels. Having the revealer, PUTINAGOODWORD(FOR), be 5/6 of a phrase is peculiar. Then, all the answers were also various levels of stilted and awkward as well: PITCHANOHITTER, PROMOTETOKING, PLUGUPALEAK – all things one can do, but not dictionary-level phrases.

Theme: Each theme answer included a brand name that ended in EX. 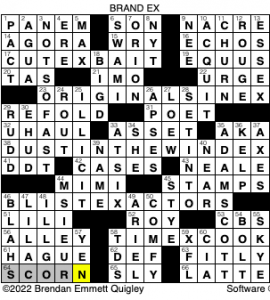 Each theme answer also includes a common title or phrase such as DUST IN THE WIND or B LIST ACTORS, which was a belated revelation of mine. It was relatively easy to recognize the theme as I solved, especially once I got DUST IN THE WINDEX and BLISTEX ACTORS. I also though that each of the downward crossing answers on the Xes were pretty fun, such as 33a [“When some hve dinner”] AT SIX and XFL, a See-also clue that teams up with TDS. Both cross TIMEX COOK.

That’s all from me today! See you tomorrow!