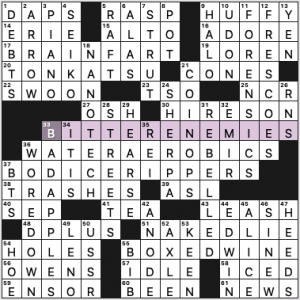 I really felt like I was struggling here, since I didn’t nail BITTER ENEMIES, instead stumbling to MORTAL ENEMIES and flailing at the crossings. But hey! Still finished in a quicker sort of Friday NYT time for me. I won’t podium, but I gave it my all and I’m proud of my performance.

What? Yes, I was watching women’s figure skating before getting to the crossword. 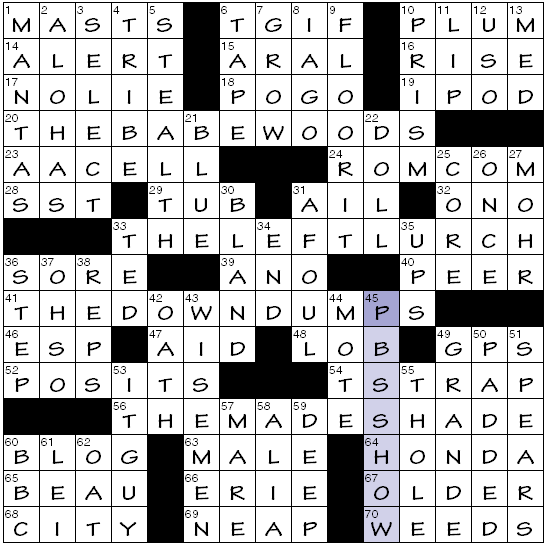 Today we have phrases with the structure x IN THE y but the gimmick is that the word ‘in’ is obviated by placing x between ‘the’ and y.

Solid theme, nothing too fancy.

Quick spin through the grid:

I just did this week’s (first) Fireball crossword right before this one. (Spoiler alert for that puzzle:) Imagine my surprise when the revealer from that puzzle shows up as the title for this one.

This puzzle’s theme is all in the clues, however. Each theme answer’s clue is “Turns” + a preposition. 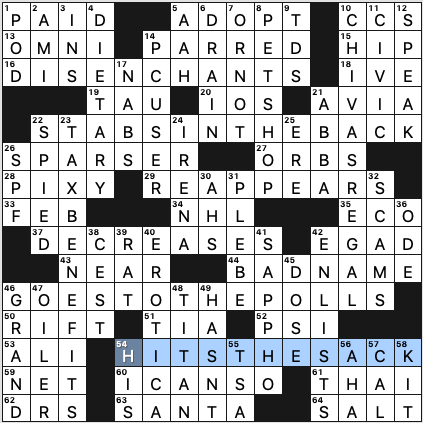 Very nice. I like how the prepositions are paired with their opposites.  I do have to say I enjoyed the idiomatic entries much more than the standalone words.

Fill highlights include CHIVAS REGAL, TAX BENEFITS, PET SHOP, SAPPHO, and EROTICA. BAD NAME [Sullied reputation] is curious. Generally, you can sully someone’s “good name”; does that then give them a BAD NAME? I can’t say I’ve ever heard about or read about someone using that phrase. And there’s a bit too much duping going on between AAH, AHS, and AHA. Sounds like someone’s about to sneeze.

Good morning, and happy Friday! This was a very, very hard puzzle for me! I did not finish on THREE squares, and had to run the alphabet while “check grid”-ing for all of them– the crossing of LADE / ARISTA, and BICORNE / ORRIS, and MONAMOUR / PRINTEMPS. Other entries where I needed every single crossing were TSAI, ELLIS, and HAYDN. STAR GATE, SUMERIA, and ALTO CLEF were also very hard for me, but I was able to infer some of the letters. 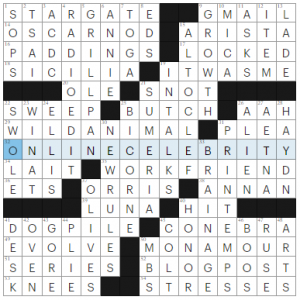 There were also a handful of clues that felt too tricksy for a Friday– WILD ANIMAL clued as [Range rover, say] should have gotten a question mark, rather than a “say” in my opinion. (I guess we were supposed to notice the capitalization, maybe.) And I still don’t really get [They may be hurled at a heel during a wrestling match] for BOOS. Is the idea that a heel is just… someone you don’t like? The verb “hurl” is not one I associate with booing.

I played myself though, because I slotted in “The Rules” over NEW RULES and “masch” over BUTCH and in fact had started to compose a post in my head about how “masch” is the wrong spelling. Well yeah, duh!! Because it was wrong!! C’mon, Malaika!

What else? [Clean cut?] was a great clue for RADIO EDIT, [Screen writing?] was a great clue for BLOG POST, and WORK FRIEND is a great entry. Let’s fight about ONLINE CELEBRITY in the comments– I don’t think this is a thing anymore? Maybe ten years ago, but now a celebrity is a celebrity. Rachel Zegler was making YouTube vids and then got cast in a Steven Spielberg movie… and she’s still making YouTube vids!! Those “please don’t destroy” dudes are on SNL… Binging with Babish is pals with Jon Favreau. The lines have blurred, everything is online now so an online celebrity is just a celebrity.

Theme: The last word in each theme answer (the trunk of the answer) is a type of tree. 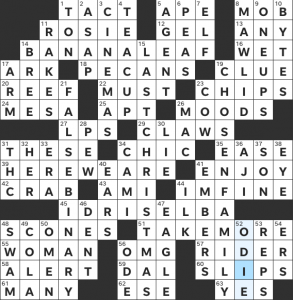 These were great theme answers. I love the queer connection between the three.  As I’ve said before, I love Down themers, so this was a treat for me and “trunk” was a really creative way of hinting toward the ending word of each answer as well.

Grid-wise, this was an interesting asymmetrical adventure. The upper left reverse stairway (as I like to call it) allowed for some fun answers like BANANA LEAF to span most of the upper section. Plus the diagonal black squares through the center played well with the themers while stilling allowing for a nice openness between grid sections. The three middle rows were a nice combination of answer lengths, and who doesn’t love seeing IDRIS ELBA welcome you into the lowest section of the puzzle?

Overall, a great Friday puzzle! A MUST-solve, if you ask me.

Any day that I get to solve a Zhouqin Burnikel puzzle is a good day, and today’s Inkubator offering was no exception. 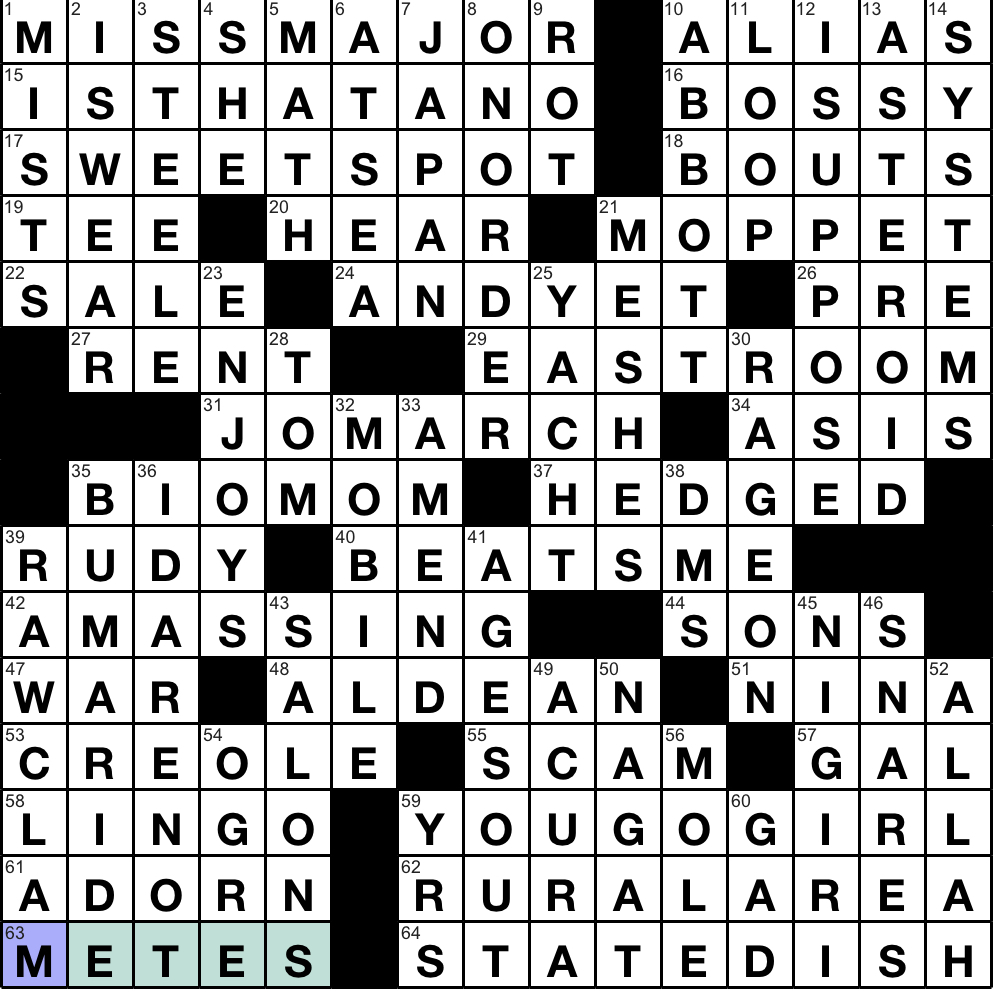 A lot of really nice entries here in the 8s and 9s that made each section of the puzzle fun to dig my teeth into. I loved seeing the puzzle kicked off with MISS MAJOR, which started a lovely stack when combined with IS THAT A NO and SWEET SPOT. Made for a great start to the puzzle, that continued smoothy through the finish.

Lots of talk-y answers, which I’m always fond of. I can almost imagine a story with IS THAT A NO, I SUPPOSE, BEATS ME, and I DARE NOT all working together to discourage action – until YOU GO GIRL comes in for a final bit of encouragement.

16-Across [Adjective often unfairly applied to assertive women] for BOSSY

17-Across [Perfect place to hit] for SWEET SPOT

14-Down [Many gamblers have them] for SYSTEMS

28-Down [Holland born in England] for TOM

Here’s some JO MARCH goodness – and the scene that gave us my favorite meme.