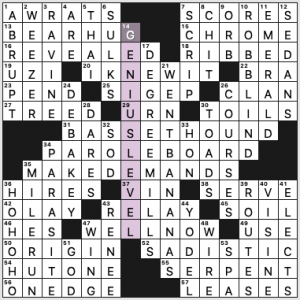 Why, it’s Billy Bratton! I just saw him in a Zoom webinar last week—my alma mater Carleton College hosted a professsor (David Liben-Nowell), a recent grad (Sophia Maymudes), and a current student (Billy) who all construct crosswords. This is the first of his puzzles I’ve actually done—he’s had five priors blogged by others on Team Fiend. It’s an accomplished themeless, too—nothing in it screams “newbie.” And a 66-worder, too? 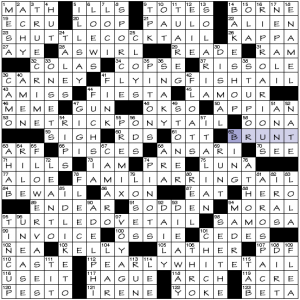 Upon arriving at the second theme answer I realized that all of them were going to end with an suffixed -TAIL, which hastened the already-speedy solve.

Anyway, these are like those before-and-after bits of wordplay.

Theme works, and is maybe too easy.

THEME: None. Well, there is a little mini theme… (see first of the favorite entries) 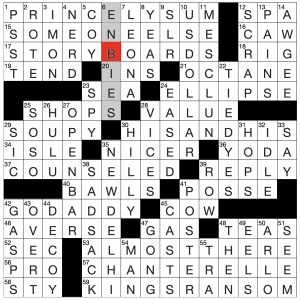 I’ll just stop there… because otherwise I’m just going to end up typing every entry in the puzzle. This was fantastic all around. Is there any ugly stuff at all in this puzzle? When PSST and SIC are the ugliest entries in the whole grid, then you’re looking at a damn good grid.

Enjoyed learning ENBIES and LEONA Lewis. Though I will confess I wasn’t 100% confident in SEA, which crossed both. I mean, of course it’s a [Place for whale watching] but the clue seemed oddly specific in comparison with the vastness of the SEA (same for the US DOLLAR / [Currency in NYC] pairing). Anyway, SEA was the last thing I filled in.

5 stars for this one. Wonderful puzzle. 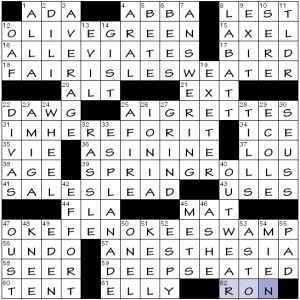 For this edition of the Stumper, I never had the typical “how am I going to break in” quandary. Was able to start filling in a few entries here and there, especially in the top half, enough to stitch together the whole section with relative ease. It helped that 16-across [Lightens] ALLEVIATES came to me with just one crossing letter. Apt too!

Had some delays encroaching into the center section, first with CHORE for 27-down [Disliked duty] GRIND, then with BARRETTES instead of AIGRETTES as [Hair ornaments for Marie Antoinette (25a). 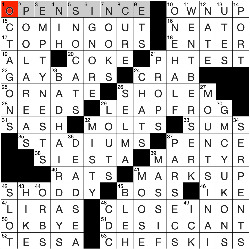 Taking me close to the 4-minute mark, this puzzle was mostly a satisfying challenge, although uneven in difficulty. Your mileage may vary, of course, but I found the NW markedly easier and the SE a lot harder than the rest of the puzzle. It’s a nice-looking construction, with the eye pulled in an S shape around the grid.

Some notable entries and clues:

I could’ve done without GMC YUKONS, which felt like a green-painty way to use a 9-letter opening (plus, having to know or figure out the make AND model, or maybe I’m just salty because I haven’t owned a car since 2003). The 1A clue [Store sign words suggesting longevity] is an obvious attempt to clue a partial phrase, OPEN SINCE, as not a partial. Did not like. Those aside, the fill overall is pretty darn good.

no write-up from me beyond noting that erik clued TEEN as [“you’re telling me a cis ___ built that chapel?” (@RileyJohnSavage tweet)]. happy saturday! 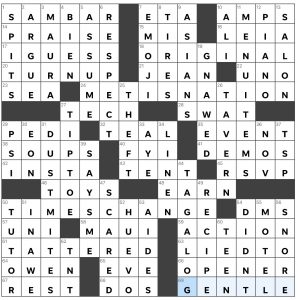