ACROSS THE POND is the central revealer at 14d [14d. Overseas, like the sets of starred clues]. The starred clues on the left side of the grid use Americanisms whereas their counterparts on the right side use Britishisms. 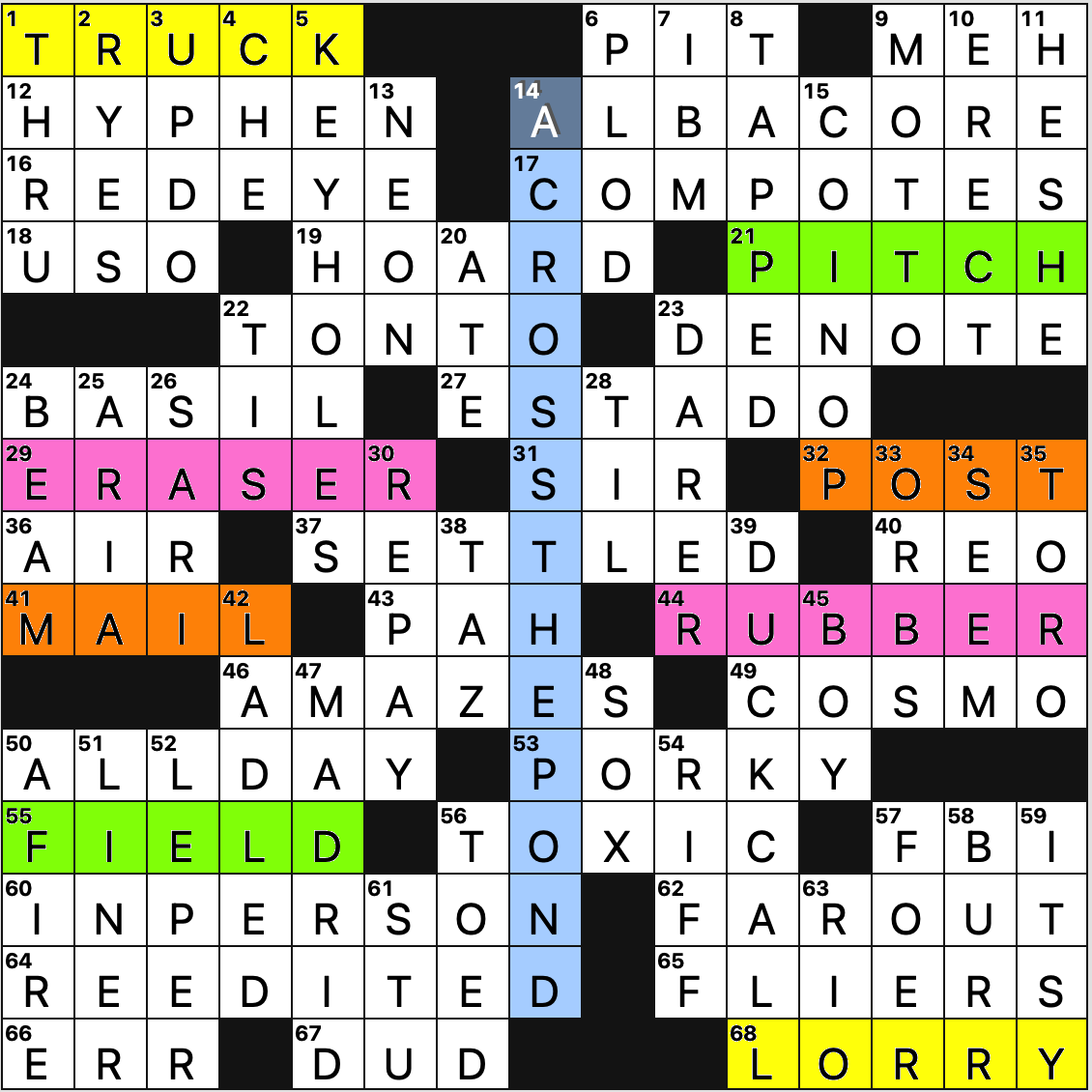 I like the consistency here and how both clue and entry use localized terms. This leads to cluing that feels a little awkward (I’m looking at the “remove a period/full stop” one), but it’s all in service to the cause, so I’m cool with it.

There’s a good variety here, and there are loads more examples one could draw from. But I like the fact that for this puzzle, the counterparts are all the same length, so one couldn’t have UNDERWEAR on one side and PANTS on the other, nor WIFEBEATER and VEST.

One thing that I think would’ve really improved this grid is if it had left/right symmetry instead of the standard rotational symmetry. That would have made it easier for the solver to find the counterparts and fully grasp the theme. And visually, it just would’ve made more sense.

Another nit is that the revealer clue is a generic “Overseas” which doesn’t jibe with how I’ve always heard the term used. In my experience, ACROSS THE POND has always been used when referring to the US and UK specifically. You wouldn’t say, “Oh, I’m going across the pond to Hawaii.” Feel free to refute that if you’ve heard otherwise.

Moving on, I spy KEYHOLES, DUCK CALL, ALBACORE, and IN PERSON jazzing up the grid with nice shorter entries like PORKY, RED-EYE, ALL-DAY, MADRID, and “FAR OUT!”

Didn’t know the author of Everything Is Illuminated, Jonathan Safran FOER. But I have heard of his other novel, Extremely Loud & Incredibly Close.

A fun puzzle, especially for those of us fortunate enough to have lived on both sides of the pond. 3.75 stars. 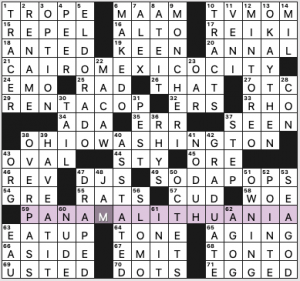 The geography/wordplay theme in today’s 16×15 puzzle runs names together in a mashed-up concoction:

I like this sort of thing, and I’m mad at how long it took me to grasp what was happening in the 21a. 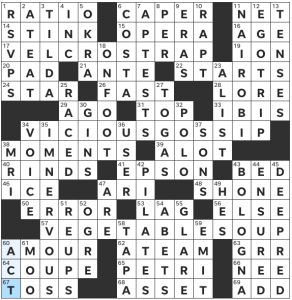 It feels appropriate that this puzzle came out on the same night that the State of the Union aired (well, at least for those of us on the west coast solving before midnight). Like all the best USA Today puzzles, the title connects well to the theme (another possible title could have been “Split Second” – has that been a USA Today title before?). VICIOUS GOSSIP and VEGETABLE SOUP are the standout theme answers, even if it took me a long time to find the word VICIOUS (kept wanting “malicious”). VELCRO STRAP is just not as exciting of a phrase, but it is valid. Given that the puzzle is totally asymmetric though, why not go for a more exciting theme answer like “venus flytrap”? Oftentimes weaker theme answers are made more excusable by length constraints, but since here any length could work, I think puzzles should aim for the most exciting words possible that fit the theme. 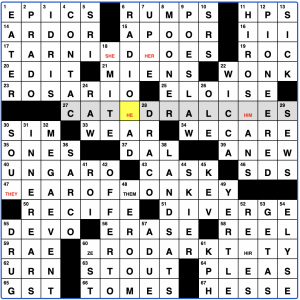 Byron Walden has today’s AVCX, though I’m not sure I agree with it’s 5/5 rating on the difficulty scale – the cluing was hard, but having an aha on the theme helped make any squares that didn’t feel like they were working out make a lot of sense:

Each of the entries includes a set of pronouns for properly addressing someone – HE/HIM, SHE/HER, THEY/THEM, and ZE/HIR.  Each down clue crossing one of these also takes advantage of the extra letters available, so we’ve got RADIO[HE]AD, “UP [HER]E!”, HIROS[HIM]ANS (“Fans of the Toyo Carp baseball team, most likely”), [SHE]MITE, SOU[THEY], [THEM]E ROOM, RE[HIR]ES, and [ZE]ST. 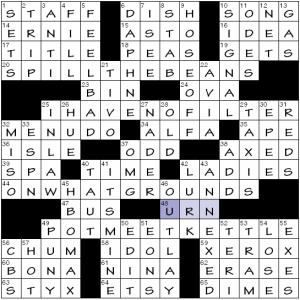 Drink up. This was a very fast solve, as I encountered zero impediments. 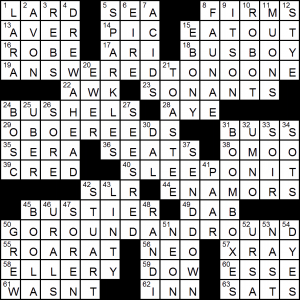 As theme concepts go, this one by Dr. Sessa is a doozy. The wheels on the buses are represented by two circled O’s, and each is on a BUS trigram, the revealer completes the tot song lyric with GOROUNDANDROUND.

The fill on the other hand, UMNO. It rarely SPARKLES, and is tired an dull far too often. We have SONANTS, OMOO, ESSE, TOASTEE, and often in places that aren’t excessively stressed. 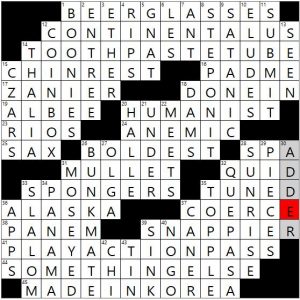 I had many nice words written about this puzzle somewhere around 9 am, and now my day is gone, and I don’t know where those nice words went. But look at those long entries! I don’t know two whits about wordlist management, but each was a lovely treat.

Much of the grid fell too quickly for me to savor, but I’m here for OLGA Tokarczuk, love the cluing angle for PANAMA, and am not that wild about SPONGERS, as an entry or as a word in general. Don’t know why.

Does BOONIES have a connotation, either negative or positive? I don’t use it often myself, but I have the Little Big Town song stuck in my head, now.