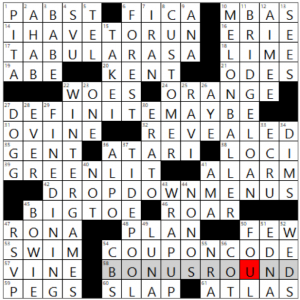 It’s been a long week and I’m tired, but the gift of a constructor like Robyn is that when I see her byline, I’m suddenly looking forward to spending a little time in the cruciverbal world that’s emerged from her mind.

Look at this crisp lineup of my fave fill: “I HAVE TO RUN,” a DEFINITE MAYBE, GREEN-LIT, DROP-DOWN MENUS, a handy COUPON CODE, a game-showish BONUS ROUND, the recently concluded WINTER GAMES, FINE DINING (this week marked the second anniversary of the last time I ate in a restaurant), a pretty TIDE POOL, and a MELON BALLER (I have a large one that’s more of a cookie dough or meatball scooper). Watermelon? That is definitely the baller of the melon category. 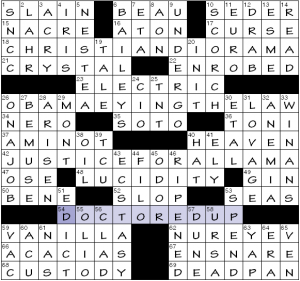 Quickly this morning. Bilateral symmetry in this 16×15 grid.

They are also looking for women and nonbinary mentors to co-construct with newer puzzlemakers! Fill out the interest form here.

Now on to the fun part! The theme has us in a drawer. And not just any drawer. The most private drawer! This is an “only in the Inkubator” puzzle and I am here for it.

Each theme answer spans two entries in the grid and describes an item you might find in a female-presenting person’s bureau. 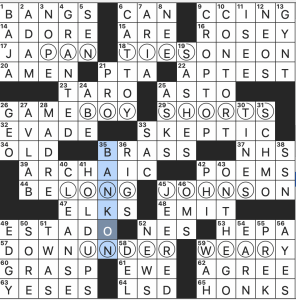 I enjoyed this theme! It made me smile. I so appreciate the Inkubator’s commitment not just to cis women, trans women, and woman-aligned constructors but also to representation in the content of the puzzles. More women’s names. More entries and themes that represent women’s experiences. It’s a vivid and entertaining reminder that “male” has been the default mode for far too long. Laura, Tracy, Stella, and Brooke have widened the horizons of crossworld. Quite an accomplishment.

What I didn’t know before I did this puzzle: never heard of ROSEY Edeh. I’m glad to know about her now.

And we can’t have a reference to Eurocentric cartography without seeing this.

Theme: WATERFALL (51a, [Cascade, and a feature of 17-, 22- and 46-Across?]). Theme answers are familiar phrases featuring the trigram HHO. At the first H, the other letters “drop” downwards before returning to finish in the Across direction. 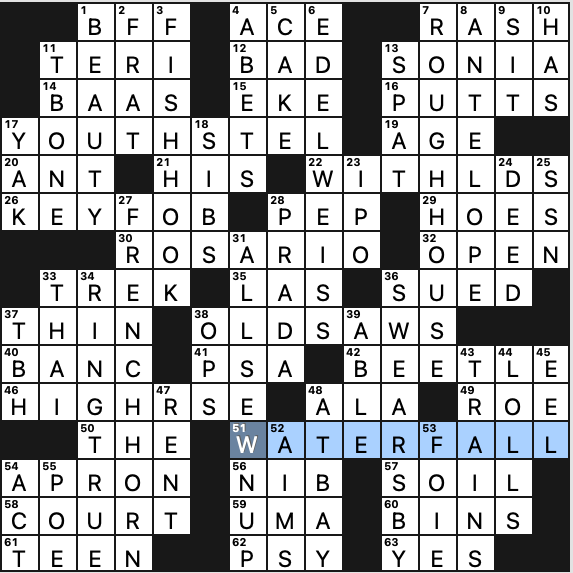 Nice. That works. It took just a second to figure out what was going on, mainly because I had to make sense of the counting instructions in the clue. I wonder if people see “Look down at letter 5” and actually look down at their lap or the floor or whatever and wonder, “What am I looking for?” Veteran solvers can ignore the parenthetical comment and figure things out on their own.

It was just about a week ago we had an HHO theme, but that was in the NYT. That one had the revealer JUST ADD WATER, and the HHO phrases were missing that trigram completely. It would have been nicer if there was more space between that one and this one, but these things happen and one publication isn’t going to base its schedule around another publication’s puzzles.

Aside from the theme answers, the highlight of the grid is EDELWEISS which makes me think fondly of the EDELWEISS Lodge and Resort in the lovely Bavarian town of Garmisch-Partenkirchen. There you can take a tram ride up into the Alps or drive an hour to famed Neuschwanstein Castle or see the sights in nearby Munich. Sadly for most of you, it’s only open to America’s military and retirees, but I’m sure you can find other nice accommodations nearby.

What else is good? OLD SAWS, ROSARIO Dawson, KEY FOB, ANTELOPE, and RING TRUE. There’s a lot to like here including TBH (to be honest).

Theme: Each theme answer ends with the name of a Batman villain, and all of them are “going down.” 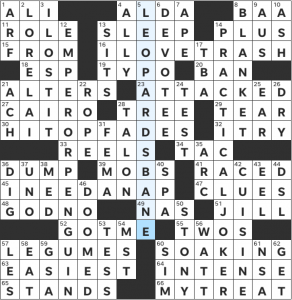 Not gonna lie, I put on Prince’s “Batdance” as soon as I saw the title of this puzzle. Obviously, with all the hype around The Batman, this puzzle is exceedingly well-timed. I wondered if PRACTICAL JOKER was going to be a theme answer. Despite my new-found ESP in that regard, I thought that these were great themers, with LEOPARD’S BANE being new to me. They were also so fun and long, “going down” the grid. Plus, there were a few other DC comics references I caught, including 7d [“Gorilla Grodd, e.g.”] APE, 11a [“Batman, for Michael Keaton, e.g.”] ROLE, and 51a [“Scott of ‘Black Lightning”] JILL. I’m not typically a DC DEVOTEE, so there may be more! Shout ’em out in the comments.

This was an asymmetric grid, which I think contributed nicely to its openness in the middle two sections and the great bottom section with two sets of seven stacks. Plus, how fun were 16a [“Oscar the Grouch’s signature song”] I LOVE TRASH, 30a [“Haircuts that are short only on the sides”] HI TOP FADES, and that relatable 45a [“‘This midday slump is really hitting me!’”] I NEED A NAP (I say as I write this right around midday).

That’s all from me, I’m going to 58d [“Enjoy some shawarma”] EAT, which had been MY TREAT plan for lunch for a few days now. Needless to say, I feel seen by this grid, which was such a fun and creative one. Have a good weekend!

Good morning, everyone! I did not know many, many things in this puzzle, but looking back, I never really got stuck? I did not finish though, on the Y of VICHY / HOARY (I had an E) and the R of FRANCOISE HARDY / TRL (I ran the alphabet). 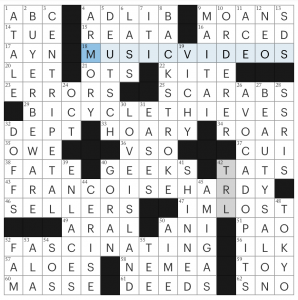 Fill that was not my fave: REATA, OTS, HOARY, VSO, CUI, A TALE, IT I, VICHY, TRL, ORDERER SDS, SSRIS

Fill that was my fave: MUSIC VIDEOS, IM LOST, FASCINATING (clued as [“How about that!”]), BUYER BEWARE, LOVE ISLAND, MAI TAI, BEAUTY SALON

Other things: I thought that I did not know the two marquees, (the aforementioned FRANCOISE HARDY + the movie BICYCLE THIEVES) but actually I have heard of the latter because it inspired an episode of Master of None. I really wanted 90 Day Fiancee to be the show described as a human rights violation because, like, it is. I always get CENTRIPETAL force confused with centrifugal force.

Music that I listened to while solving + writing this post: This video, three times in a row.