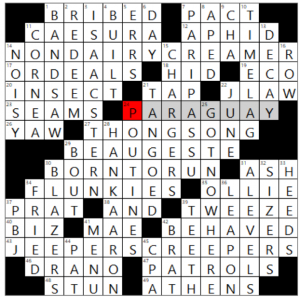 What have we here? A 64-worder whose NW and SE corners are kinda cut off, and the constructor is Natan Last so it’s gonna be hard. Except … not so much? On the easier end of Saturday puzzles, I thought.

Fave fill: PARAGUAY (appreciated learning that Guaraní is one of its official languages–remember that Latin America has so many people whose first language is neither Spanish nor Portuguese), “BORN TO RUN,” FLUNKIES, Briticism PRAT, JEEPERS CREEPERS, ISAAC STERN, HANK AARON, and GOT NOWHERE.

til (or today I learned) what PARI-PASSU means! No, I didn’t study Latin. It’s [On equal footing, in Latin].

A solid four stars from me. 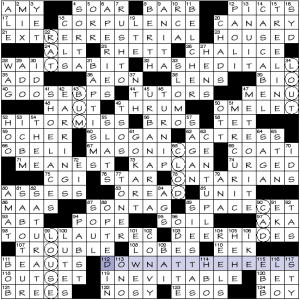 I’ve circled them for convenience here, but they had to be discovered during the solve. The intersecting across answers incorporate the downs and then continue where they diverged.

There’s a revealer as well: 112a [Tattered, and a hint to six answers in this puzzle] DOWN AT THE HEELS. That pulls the title into place.

Good stuff, with a minor misstep.

On to the Stumper! 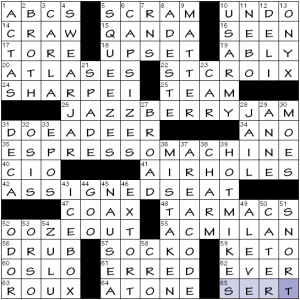 Once again, a puzzle that fights back. This time I started chipping away on the right flank, then moved clockwise through the bottom and fleshed out the center before straightening out the upper right. At this point I needed the northwest and just a little to finish out top-center.

Of course the actual process took much longer  and was far less smooth than that description makes it seem. And when the grid was finally complete I had to methodically scan to figure out an incorrect letter, which turned out to be in 64a [In harmony] AT ONE, for which I’d entered AS ONE. The crossing entry is 46d [Shake down] EXTORT (not EXTORS, obviously).

The most notable struggle involved 26a [Purple Crayola color] JAZZBERRY JAM. First I put in BLUEBERRY JAM, which was then amended to RASPBERRY JAM, after which I tried RAZZBERRY JAM before finally getting it right.

Elsewhere I had BOFFO for SOCKO – 57a [Smashing, in show biz]. And the final lingering misfill was 6d [Baseball uniform specs] CAP SIZES, not HAT SIZES, which had prevented me from sorting out that final block including SCRAM, UPSET, ADESTE, and MATTER (5a, 18a, 8d, 9d). 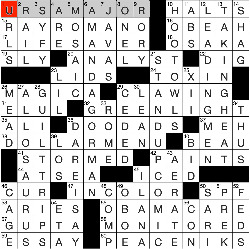 My general wish is that this puzzle would’ve given me a lot more fight. Like, any fight. I suppose that not all themelesses need to be hard, as Universal has shown with its freestyles since the start of this year. But I’ve been solving the LAT Saturday for about 20 years now and it’s created an expectation in me that I’m going to work a little harder on the weekend, dangit!

Highlights: ALLOSAURUS, GUILT TRIPS, STAND-UP COMIC, AMANDA GORMAN (although I’d have clued her with reference to Call Us What We Carry or Change Sings for a little more difficulty and timeliness), the clever clue for LEADING MEN [Phoenix and Washington, e.g.] although I arrived at it too late in the solve to be fooled by it.

Lowlights: OBEAH, OBOE (it’s not that I don’t like the entry, it’s just that I’ve seen the Peter and the Wolf clue enough times that it stuck out to me as something that I’d like to see retired for late-week puzzles).

Anyway: It’s a nice construction that would’ve been better either in a different context (Universal, or an indie outlet where the difficulty would be indicated as 1 out of 5) or with harder clues.

I also can’t not mention the wonderful news that Patti Varol is now the editor of the LAT puzzle. I know some folks have had their differences with Rich Norris as a member of the old guard (certainly I was not pleased with his decision to have a Woody Allen tribute puzzle back in 2020); I personally, however, owe him a great deal as a constructor. Back in the early aughts, my very first published puzzle was in LAT; I don’t have the puz any more, but I know he accepted it in spite of it being far less than perfect (he told me at the time that my theme execution violated some consistency conventions, but that it was innovative enough that he was taking it anyway), and I learned so much from Rich in those early years of my constructing experience. I couldn’t possibly cancel him, either in terms of where I submit my puzzles or in my heart. I will miss working with him…and it is also amazing and awesome that one of the most qualified, if not the most qualified, women in the biz is taking the helm. I am so excited to see what Patti does next!