Theme: Familiar phrases or words that feature an LI bigram, have it changed to LLY to wacky effect. 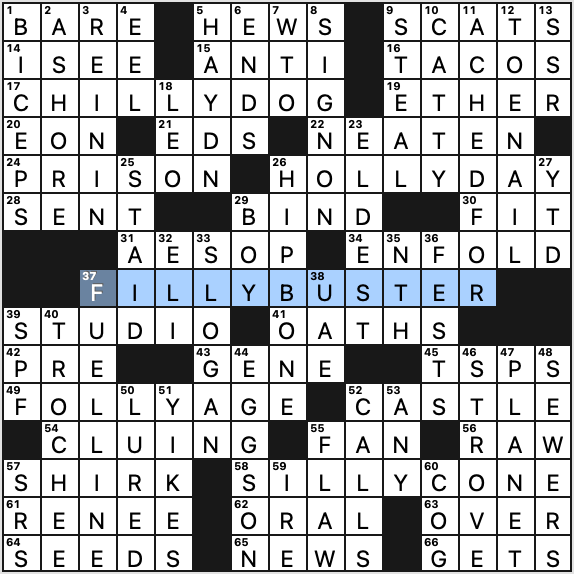 I like the wordplay here (especially the last one), I just wish it was consistent all the way through.

In the fill, I like TOENAIL, TROCHEE, FUEL LINE, HIP BONE, and “YIKES!” But we really should be able to make a grid these days without SSR (not to mention SST which is not in this grid, thankfully). SRS at the opposite side of the grid is only mildly better. 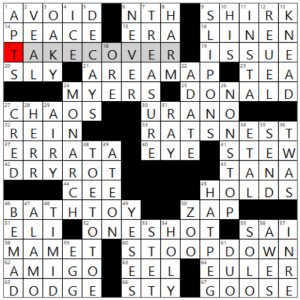 This grid’s center is asymmetrical because there’s a duck depicted there. The many theme answers relating to the verb and the noun duck are all over the puzzle. Verb action: AVOID, SHIRK, TAKE COVER, STOOP DOWN (can you stoop any which way but down?), and DODGE. Nouns are “duck, duck, GOOSE” (or maybe the words in that game are verbs?), DONALD Duck, BATH TOY. Other entries with duck mentions in the clues: MAMET and EGG. It’s possible I missed something else. I think the verbs relate to a waterfowl’s habit of ducking under the water, so they pair well with the grid art.

The puzzle might be overloaded with duck words, though. The Down (!) crossings are good, except for the blah HAT PEG. The Acrosses bring us the unexpected SAI ([Raphael’s weapon in “Teenage Mutant Ninja Turtles”]). I don’t think I’d ever seen SAI in a puzzle before–Cruciverb’s database shows it in a 2020 Jonesin’ puzzle (same clue but with a comma), a Dec 2021 Sunday NYT clued as a monkey … and two 1994 monkeys. Consider yourself on high alert for subsequent NYT appearances of SAI, my friends. Every 30 or so years, it’s coming to you twice. Mark your calendar for, say, 2050. Prefix URANO– isn’t so hot, and Ethiopia’s Lake TANA isn’t a common midweek entry (source of the Blue Nile, though).

Three quacks from me. 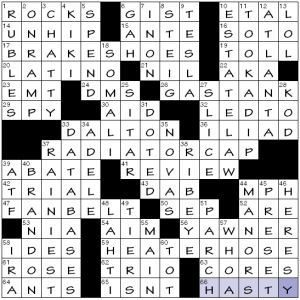 It’s a strange marriage that doesn’t make much sense, but the theme here is automobile components that in part share names with articles of clothing. I call shotgun!

We do learn a little about how the various car parts function, which is educational. 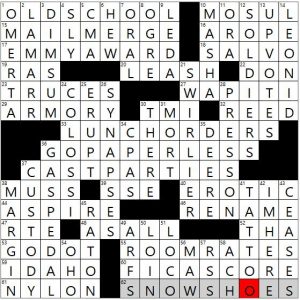 Corner 9s and a stagger stack from Liz Gorski today! Makes for an open and chunky 68-worder.

I particularly like the middle stack of LUNCH ORDERS, GO PAPERLESS, and CAST PARTIES, but each of the corner stacks as well are full of great entries undeniably in my lexicon. This really holds down the fort for any tougher proper nouns – for me MASHA [10d “Three Sisters” sister] and MORT [31d “Mad” cartoonist Drucker].

Some lovely clues in here. [Code broken by Salvatore (Sammy the Bull) Gravano] at 1d (OMERTA) offers nice in with the sobriquet if you don’t recognize the name, and while the misdirection in [36d Accord accelerator] (GAS PEDAL) was actually my first thought, I still appreciate the clue. [Game-show prize, perhaps] for EMMY AWARD at 17a did get me — it’s one of my favorite clues in a while. Into notes: 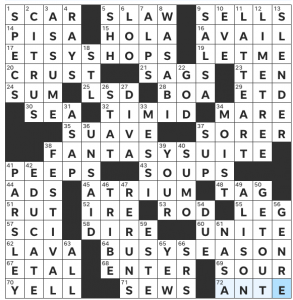 Busy day at work today so a quick write-up! malaika and I are both software engineers, so it should be a surprise to no one that I really enjoyed the theme of this puzzle. All of the theme answers are solid, with the standout to me being FANTASY SUITE. I also tried to put in “Etsy stores” before ETSY SHOPS, even though that’s not what they’re called.

I don’t mind that the puzzle is asymmetric in order to accommodate different-length theme answers, but I do wish that the SW corner was a little more connected to the rest of the puzzle. That said, all of the longer down answers afforded by the layout choice – LATTE ART, LIME TREE, FESTIVAL, PARSLEY, EDUCATE – are very nice. 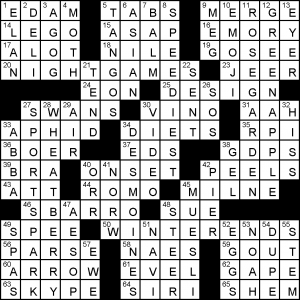 I spotted what type of theme Darryl Gonzalez’s puzzle was going to be at NIGHTGAMES. That kind of weird compound entry shrieks “both parts of a phrase go with” theme, and sure enough… WINTERENDS (does the clue writer know there is more than one hemisphere?) And so: [WINTER]NIGHT, [WINTER]GAMES. There is also the odd design choice of running the other four theme entries as stacked pairs of tens. So the top is [Winter]ROSE & [Winter]GARDEN; [Winter]GREEN & [Winter]APPLE. The bottom are [Winter]SPORTS, [Winter]PARK; and [Winter]WHEAT & [Winter]BERRY. There sure are a lot of dubiously distinctive [Winter] phrases, and a lot of them are quite similar and repetitive as well.

The theme is very crowded, and the design is mostly short entries and very cut off into sections because of that. There weren’t too many stand out entries, but neither was there too be many outright clunkers. I think I’m OK with NORW? I can imagine it in weird old atlases?