I thought we just had a puzzle with a “cut the cord” theme, but nope, that was a Universal Sunday joint almost a month ago (good puzzle, by the way).

This one is entirely different and took a fair amount of unraveling. The revealer is UNFRIENDS (36a, [Cuts social media ties with, and what one does to complete the theme answers]). The main theme answers are familiar phrases that are missing certain letters. Those letters spell out synonyms of “friend” and are found elsewhere in the grid. 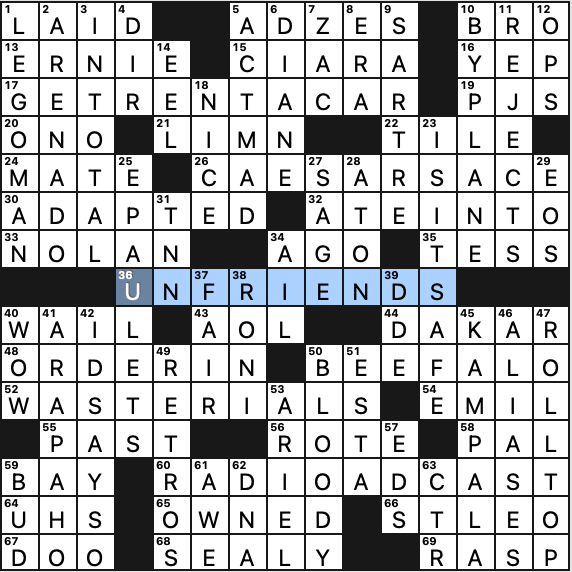 Impressively done, because there are a lot of pieces to juggle here. It felt like it took a long time to sort out because the missing pieces always seemed to be on the opposite side of the grid somewhere. But I like the premise and execution.

Now, about that fill. There are a lot of pitfalls all around. We had ARENADO crossing ERNIE and NOLAN in the NW, KAMPALA crossing DAKAR and EMIL in the SE, and ZAC crossing ADZES and CIARA in the North. Also not sure that LEGOMAN [One who sticks to his bricks] is a real thing. (The company uses the term minifigure, or minifig, when referring to its little people.) But it is Thursday, and we should be able to handle such adversities (maybe with a little bit of educated guessing). Thankfully, I found my way through.

Highlights include EPAULETS, ARAPAHO, “I’D SAY SO,” ROLLTOP, and BEEFALO. I’ve never seen Marathon Man, so I didn’t know “IS IT SAFE?” (except when Gandalf says, “Is it secret? Is it safe?” in Fellowship).

One of the chewier grids to come down the pike in a while. How did it treat you? Four stars from me.

This is jumbo Fireball. The theme is clearly described in the title: plus-es and minus-es. Each theme answer has “es” either added or subtracted, and Peter helpfully signals which it is in the clue. 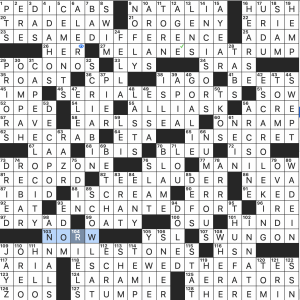 Wow. That’s a lot of theme material. All the base phrases are solid (earless seals may be a bit obscure, but they’re legit) and the zany answers are amusing. I grokked the theme early on, which helped me solve the puzzle, but the theme answers weren’t obvious. So not blazingly hard or ridiculously tricky. Solid, fun, and worth the solving time.

I was going to grouse about being Natick’ed at the intersection of 6d [Onetime alternative to a Sebring] and 26a [Loser to Dua Lipa for the 2018 Best New Artist Grammy] because I  there are lots of more accessible ways to clue HER, so this is Peter being cute in the service of never reusing a clue, and for some reason I thought the Sebring was some kind of racing car. It’s not. 6d is ALERO which should have been obvious to me once I had the other letters, so that one was my fault. So why am I telling you about this? I’m telling you because if you haven’t seen this clip of Dua Lipa and Stephen Colbert, you need to stop right now and watch it.

OK. A few other things.

What I didn’t know before I solved this puzzle: that Barry MANILOW wrote the “I am stuck on Band-Aid” jingle. I also did not know that John Travolta appeared in the commercial.

Hi folks! Sophia here filling in for Ben on a tricky Thursday puzzle. 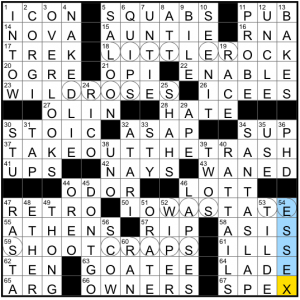 I’m kind of stunned that there are enough phrases that can be made out of a trash word + another word to make any type of puzzle, let alone four symmetric answers that work with a grid spanning revealer. I personally found this puzzle to be pretty hard! I think there’s a few reasons for that:

Combine all that with tricky but great clues like 34d [Popular site for holiday gift orders] for SANTA’S LAP, 53d [What a jalapeño has that a habanero lacks] for TILDE, and 49d [Flip-flop] for THONG, and the bottom half of the puzzle took forever to come together for me. It’s Thursday, though, so I appreciate the challenge.

Finally, congrats to Daniel on his NYT debut! How did this puzzle play for y’all? Sound off in the comments!

Editor: Amanda Rafkin
Theme: Each theme answer begins with a type of cracker. 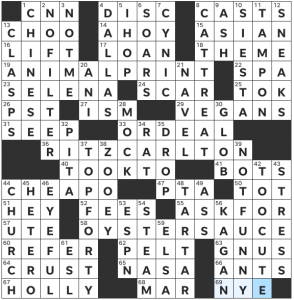 Cute theme! Each answer perfectly fits in, and is an exciting stand-alone answer besides. It took me a while to see RITZ CARLTON, partially because the clue is somewhat unspecific, and also because I attended Carleton College so I always spell the hotel wrong.

So many answers and clues made me smile as I was solving! There were some great longer answers (see: NO FILTER, TOO CUTE, TOP FORTY), some funny clues (see: 3d [Response to “Who wants to run a bunch of boring errands?”] for NOT ME), and I learned some new things (see: that o.b. makes TAMPONs, and that CHINESE encompasses Hakka and Mandarin). I also loved how many food clues/answers were in the puzzle aside from the theme: Smarties DISCs, pie CRUST, PITA, bao, even aquafaba for the VEGANS. Overall, this crossword gave me exactly what I’m looking for in a USA Today puzzle.

Theme: Each theme answer is framed by letters that, once put together, are a shade of green. 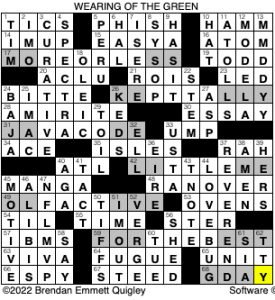 Happy St. Paddy’s to those who celebrate! This puzzle certainly seems to do so. I figured out the theme based on FOR THE BEST first, wondering also with OLFACTIVE, even though I could only think of OLFACTORY initially. Once I got those two, it was easier to tick the themers into place and that really helped to speed along my solve. As always, I was impressed that BEQ was able to shove six themers into this puzzle. There are few places where I could see the trade off in doing so, such as 18d [“___ acid”] OLEIC crossing MORE OR LESS. However, for the most part, I thought that this was a relatively accessible, if a tad challenging puzzle.

I was amused by the double Y combo doing down in 13d [“Format for entering some dates”] MMDDYY crossing KEPT TALLY and 30a [“Opinionated work”] ESSAY. Plus the double combo of 45d [“Crime investigation necessity”]  MOTIVE and 46d [“Crime investigation excuses”] ALIBI  crossing OLFACTIVE were both solid and good fun. I also learned about teletypewriters (TTYs) in 62a [“Comm. device for the deaf”] which was really interesting.

Finally, I loved that BEQ slipped EIRE in there via 36d [“Michael D. Higgins’s republic”], and while Higgins is the president of the country, I would have also loved if the opportunity to learn more about a revolutionary Irish woman or person or color who is a little less known, especially since the crosses of ISLES, LITTLE ME, RAN OVER, and OLFACTIVE would have provided support here. Nevertheless, I love the commitment to a St. Patrick’s Day theme. 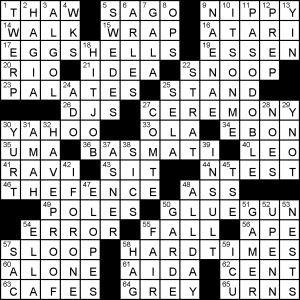 Julie Bérubé’s theme is tres elegant. I’m a sucker for idiom collection themes, and this one collects X(ON)Y phrases, stacking them in such a way as to imply the on. So we have WALK/EGGSHELLS, STAND/CEREMONY, SIT/THEFENCE and FALL/HARDTIMES.

Stacked theme entries create there own grid-filling intricacies. This is borne out by a high number of very difficult answers – old-skool crosswordese, if you will. Hope you remembered ALGOL, ESSEN, NTEST, and AMAH! YNOT was also quite a deep cut, but guessable. If I were an editor, I’d have sent it back to finesse the grid some more, even if it required some extra “helper” squares.

Little bit of a morbid title, now that I look at it!

THEME: Phrases that satisfy the phrase ______ IN THE ______ where the first word is a body part are presented literally. 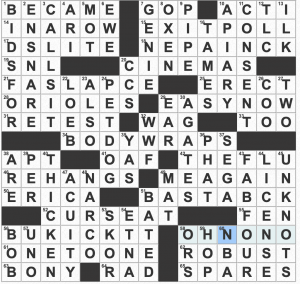 I’ve seen this type of literal theme several times, but I’m a sucker for it. Fun stuff, made tighter with the body parts surrounding the first word. Also nice that all the body parts are four letters, as are the words inside.

Those nits are a small price to pay for some really nice long entries, abundant in this puzzle. ONE TO ONE, CALLS IT, EXIT POLL, FAB FOUR, etc.