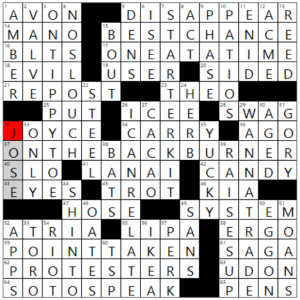 A distinctly tough-Saturday sort of solving time, and I don’t know if it’s from the ergonomics of solving on laptop on my lap or if it felt hard to you all. I didn’t think it felt harder than a standard Friday, so I don’t get it.

My favorite bit was seeing JOSE clued as 32d. [Filipino national hero ___ Rizal]. Not only is there a bust of him in front of the neighborhood Filipino community center by me, not only is there a monument to him overlooking Jean Baptiste Pointe DuSable Lake Shore Drive, but my in-laws are Filipino so of course I’ve known the name for decades. Read up if you don’t know his story.

Fave fill: ON THE BACK BURNER, “POINT TAKEN,” SO TO SPEAK, cutesy ON TIPPY-TOE, NO SLOUCH, “I CAN RELATE,” STARTER KIT, and “WANNA TRADE?”

ANIMAL / CROSSING was the distraction the world needed right when the pandemic hit. The franchise has been around for 21 years, but it was the pandemic that brought new audiences to the game and made it a household name even in non-Nintendo circles.

There have been a few ANIMAL CROSSING themed puzzles in the last two years, all with a little bit of a different take. In this one, the crossing entries aren’t obviously animals (based on their clues), but each entry is one letter short of the amount of squares in the grid. It’s that missing letter that turns both crossing entries into animals. Then, once you’ve supplied all the missing letters, they collectively spell out another animal.

The clue for the revealer at 40a is [With 44-Across, Nintendo series hinting at the letters where the starred clues’ answers intersect (Bonus: Read these letters clockwise)]. 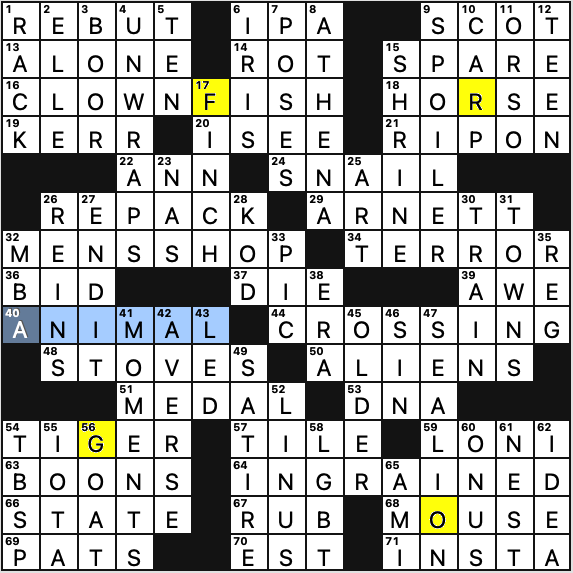 This is quite impressive and a lot of fun for someone who is (still) a fan of the game (like me). It’s a simple theme, yet not entirely obvious at the start. Once you catch on though, trying to find and identify the animals still led to some fun surprises. Simple, yet elegant. 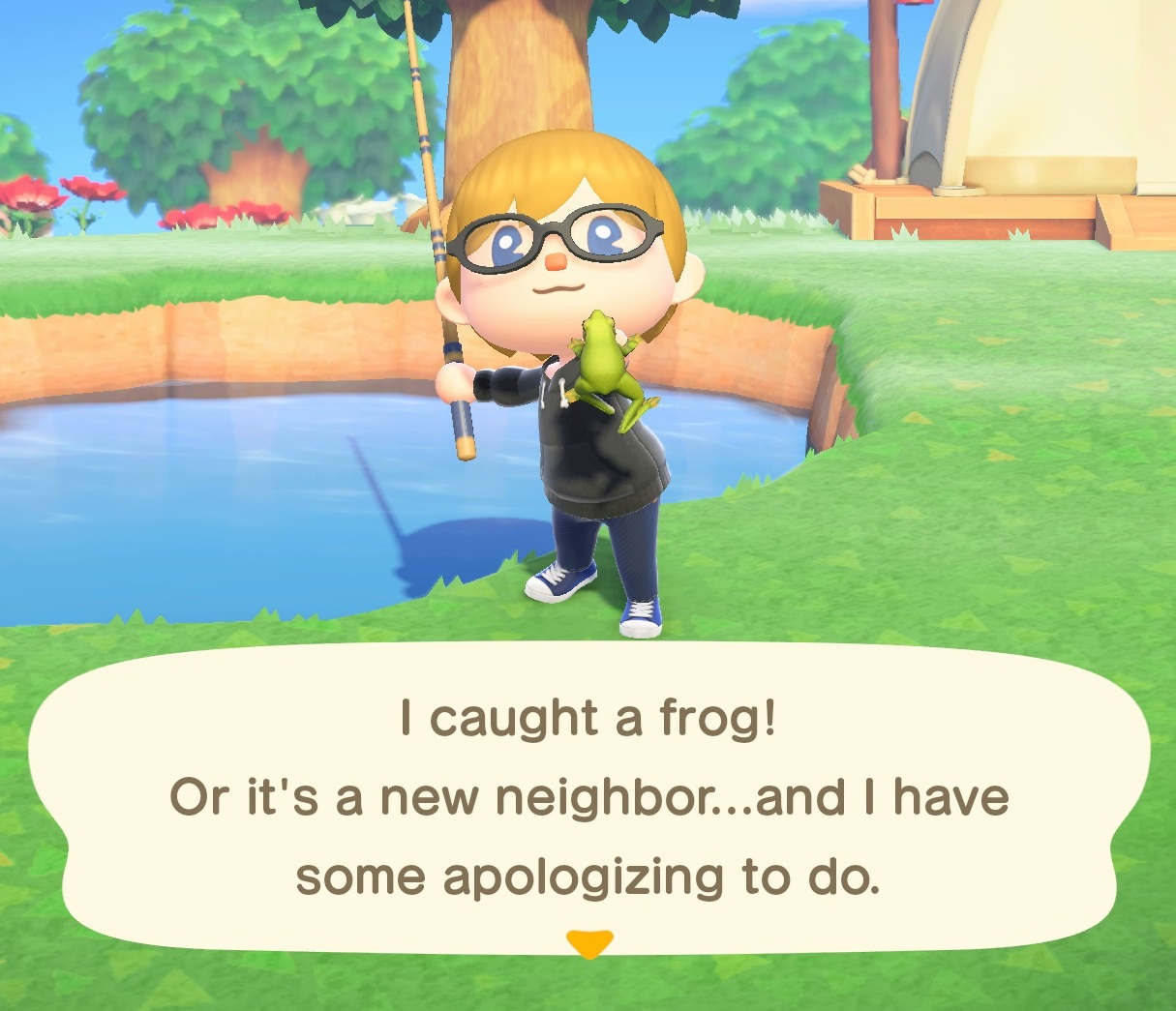 I will admit to feeling a little bit let down at the bonus FROG. I don’t know what I was expecting the crossings to spell, but a random animal just seemed a little odd. I guess I wanted something more meta. Still, with a theme this tight, I have no complaints.

Note that you can have a frog neighbor in the game but you can also catch a frog with a fishing pole…which is a little awkward. Best not to talk about it.

Since the theme entries aren’t placed symmetrically in the grid, the long fill answers are a bit scattershot. We have SPOILER, INGRAINED, UNWRAPS, MOMENTS, and MEN’S SHOP (which sounds a little weird to me). Not overly sparkly, but solid enough.

Fun puzzle, even if you’re not a fan of the game. Four stars. 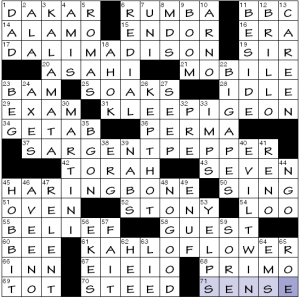 This one could have been titled something like “The Art of the Pun”. The idea is simply familiar phrases punned to include the surname of a famous painter.

Tally is four men, one woman; three from the Americas (including two from the US), two from Europe. There could have been some more variety here. 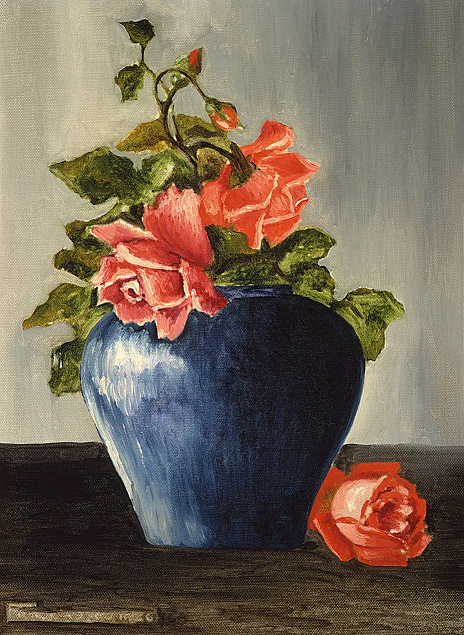 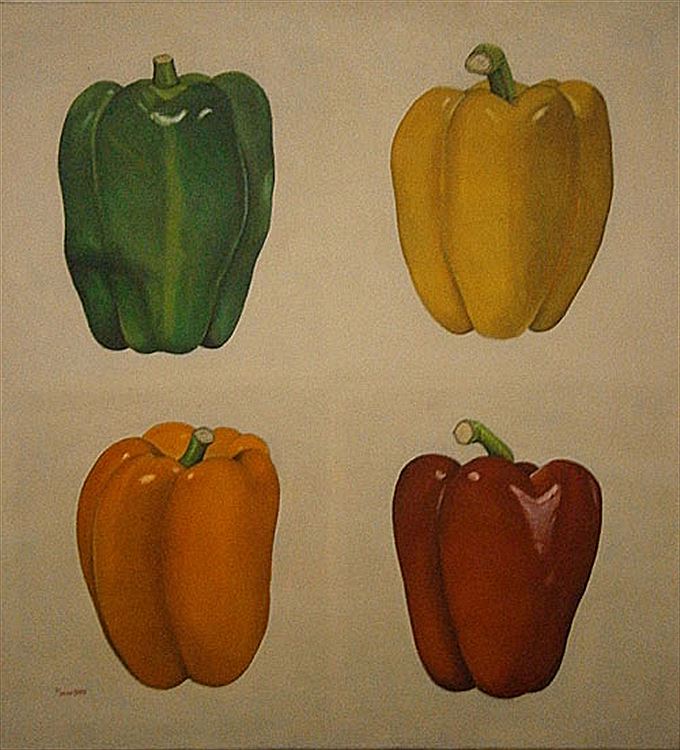 Hmm, can’t find anything else to highlight, so let’s have another painting. 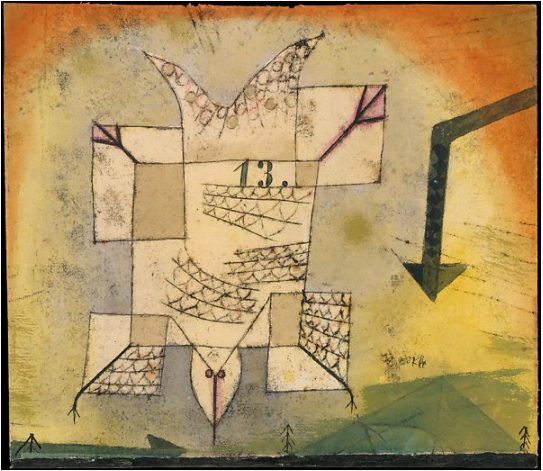 I agree with the Inkubator team that this is a challenging puzzle. It felt like a Friday NYT to me. The content is what I’ve come to expect from the Inkubator: fresh, current, less male-inflected than most major outlets. I enjoyed it all except for one quibble. EXPONENTIATE? Really? It was inferrable and the crossings were fair but really?

OK, on to the good stuff. 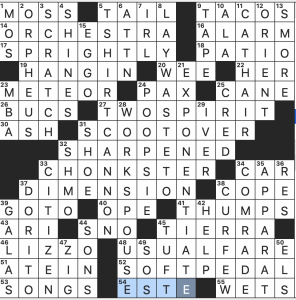 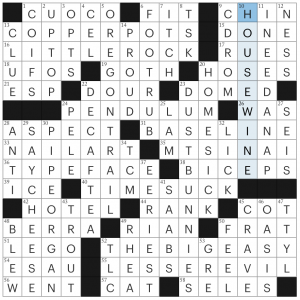 Good morning, everyone! I loved this puzzle, with so many good long entries. My faves (there were lots of them…) were NAIL ART, PENDULUM, TIME SUCK, THE BIG EASY, LESSER EVIL, OREGON TRAIL, DUST BUNNIES, SAY CHEESE, and HOUSE WINE.

Some of the short fill might have been tricker– I knew ESAU, CEL, SAABS, and TCM exclusively from solving crossword puzzles.

Theme: Each of the theme answers begins with a short version of a sport name. 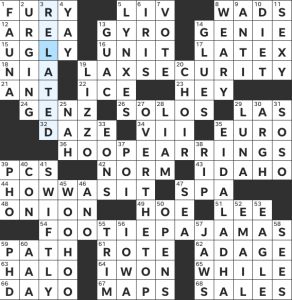 I loved the theme answers on their own in this puzzle. As a fan of heist films, I had a nice chuckle when it came to LAX SECURITY. I feel like I’ve seen FOOTIE PAJAMAS before, though perhaps not as a themer, but I love it as such a silly term (I wonder how many people solve their morning puzzles in their FOOTIE PAJAMAS). However, I think that this was also the most confusing of the theme. I thought it at first referred to European soccer/football, but when I googled it, I saw that Australian Rules Football, which is a hybrid of rugby and soccer, is spelled “footy” rather than the -ie added here. This game looks kind of wild though, so I would absolutely recommend checking out this page from an American team to learn more about the sport.

Some Friday faves for y’all:

There’s so much great stuff to learn from this puzzle, and its crossings make it easy to do so! Definitely would recommend.