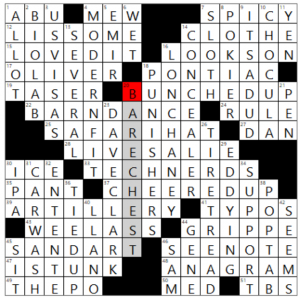 Aaugh, I don’t care for Across Lite solving on a laptop. I don’t think this was that difficult a puzzle! Heck, I blew 20 seconds resizing the window so I could see more of the wordy John OLIVER clue. (Those software developers never heard of line breaks?)

But did you look at this thing? Seven 9s running Across, enmeshed with seven Down 9s. Gorgeous! So much open space, endless flow. Just a 62-worder, and there isn’t any short junk, nor any long roll-your-own words befouling things. There were three multi-word entries I did not care for, though: IT’S A DUD and I STUNK don’t sound idiomatic enough to be crossword answers, and THE PO hasn’t earned its definite article.

Ding for the editor more than the constructor: Didn’t care for BIO LAB plus “biologist” in the GENE clue.

4.25 stars from me. The three unfave fills knocked this pretty grid down from a 4.5 … but to have a 62-worder with cleaner fill than, say, plenty of 78-word themed puzzles that are blogged here, that’s no mean feat. 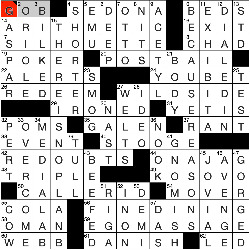 This puzzle gave me a bit more of a workout than I’ve been getting the last couple of weeks, which I appreciate. The long entries, THERE IS NO PLAN B and BECAUSE REASONS, sure are lively. Some more highlights:

I liked it! Not gonna say love, but I liked. 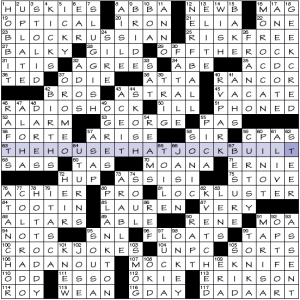 Phrases containing words ending in -ACK have them altered to -OCK, to wocky effect.

I’d call this theme serviceable but not inspiring. The difficulty level of fill and cluing for the crossword as a whole was very accessible; I had no missteps whatsoever, just the occasional pause and redirection.

So here’s some music I found. First impression is that it’s rather insipid, but perhaps it works better in the film, which I have yet to see. 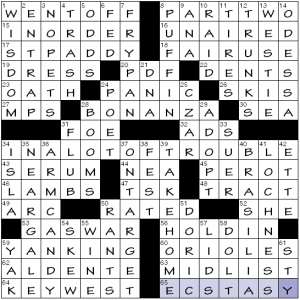 This one seemed a bit more arduous than the ‘less rough’ designation would indicate, but it was more pliant than a standard-issue Stumper, so that suggests that I don’t know quite where the line of demarcation lies.

Anyway, bilateral symmetry in this one.

Last area to fall was the upper left, but it was gettable with a little elbow grease. I think the most dubious answer in the area is actually 1-across [Had a blast] WENT OFF, and it isn’t even that much of a stretch. Oh wait, scratch that—I still don’t understand how 15a works [OK to be moved] IN ORDER. 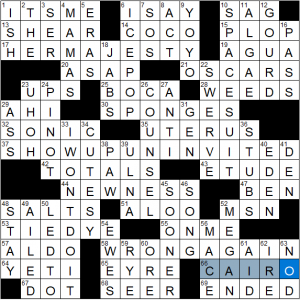 It’s a comedy chow from Rachel Fabi today. Each of our themers have a type of joke embedded within:

Fun theme set! JEST is awful tough to split across a word break, but nice that the others do. 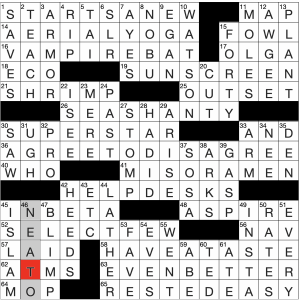 Solid themeless. Really admire the the NW and SE corners with those triple stacked 9’s- All solid entries that didn’t result in any crud, particularly in the SE which is clean as a whistle.

SEA SHANTY reminded me of that short-lived trend, maybe a year ago now? When everybody had “Wellermen” stuck in their heads for a week or so.

Never heard of SHRIMP and grits. Does anything not go with grits? I’ve only had grits once or twice in my life.