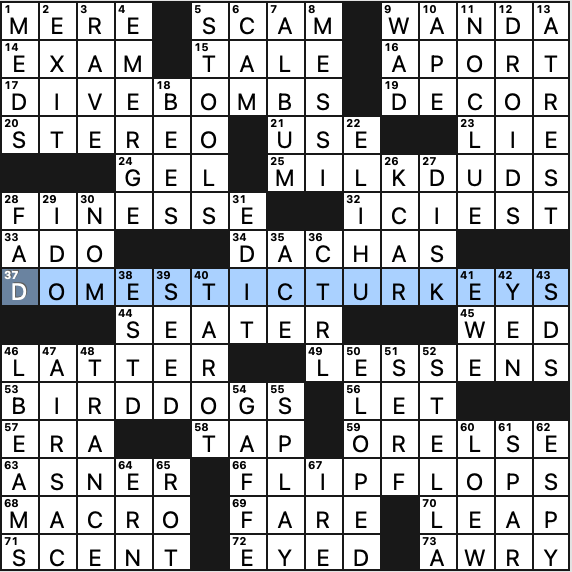 This one wasn’t for me. Little things felt off here and there, and the humor just fell flat.

But what really turned me off on the grid was coming across fill like ELIHU, K-CAR, APORT, L-BEAMS, and SDS. Those first two are holding theme answers together so I can cut them a little slack. But why not change uncommon APORT to ABORT when the only price is changing APE to ABE? And there’s no reason for SDS to be in this grid at 43d. It took me less than 5 minutes to figure out I could change 49a LESSENS to LESSONS and 45a WED to GEO with crosses EGO, YEN, and SOS. So much better to have SOS than the [Radical 1960s org.] that people under 50 have no knowledge of.

And there’s not much sparkle elsewhere to speak of. I like FINESSE, “NO CLUE” and “OR ELSE!” but that’s about it for highlights.

So wherever I solve, I’m cursed. On my iMac, I have a new, smaller, keyboard and the arrow keys are not where I expect, so solving mayhem ensues. And when the sciatica keeps me from my desk, the laptop keyboards aren’t what I’m most familiar with, so I don’t navigate the grids right there, either. So if you eyeball my solving time as a reference for your own, take it with a clumsy grain of salt. And speaking of that sciatica, I’m having surgery soon so I’ll be away from the blog for a couple weeks. I know you’ll enjoy the blogular stylings of the other members of Team Fiend who will be filling in for me! 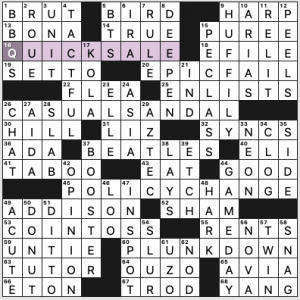 Theme: FLIP, FLOP and FLIP-FLOP are theme clues, twice each. The [FLIP]s are a real-estate QUICK SALE and a COIN TOSS. The [FLOP]s are an EPIC FAIL and the verb PLUNK DOWN (though I believe you plunk something down, but you just flop down, so this feels like a verb transitivity mismatch to me. The [FLIP-FLOP]s are a CASUAL SANDAL and a POLICY CHANGE. Neat theme idea, but the second FLOP flops in my book.

Fave clue: 37d. [Third shot, for many], BOOSTER. I couldn’t even think of that kind of shot at first! Now, for me, as a transplant recipient, my third dose of vaccine was part of the initial series of shots, and I still need to schedule my fourth dose, the BOOSTER (long story). If you haven’t gotten your booster, please do! Stealth omicron is coming, and the booster will help keep you alive. (I’m assuming you all got “fully” vaccinated prior to the fall 2021 recommendations for boosters.)

Time for me to get away from my desk. Signing off with 3.5 stars. See you in April, folks!

Editor: Amanda Rafkin
Theme: Each theme answer begins with a flavor that we can perceive via taste. 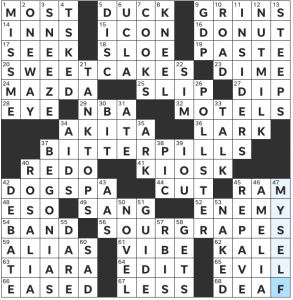 What, no salty and umami??? Kidding! I liked this theme a lot, mostly because it connected so well with the title. Is… SWEET CAKES a term of endearment that people actually use? I kept wanting “sweetie pie”. I also wanted “bitter ends” for BITTER PILLS even though if that had been the answer I would have complained about the awkward pluralization. Funny how the brain works! Two of the answers have food related words as their second parts (CAKES and GRAPES) but PILLS isn’t really a food so I don’t *think* that’s connected to the theme… but I could be wrong.

This grid has a very satisfying layout – I love the staircase blocks on the middle sides. Each corner of the puzzle felt fresh and devoid of many 3 letter answers. Looking over the grid now, I see that’s because the 3-length words are concentrated in the middle of the grid, which was fine with me because they were all clued interestingly! In fact, my two favorite clues in the puzzle were for 3 letter answers: 35d [Cabinet in a synagogue] for ARK and 39d [“Here’s a slip of paper instead of actual money” note], which made me laugh – a rare feat for a word as common as IOU. 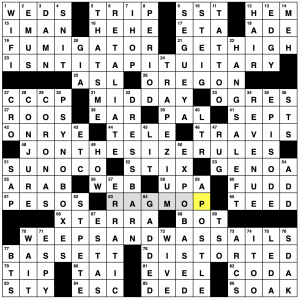 The bulk of the theme comes from these three oversized entries and a revealer:

With that last clue as a guide, it’s easy to work out where the instruments have been inserted.  It’s WEEPS AND WAILS, so between the B in BOT (68A, “Many an active Twitter user”) and WASSAILS in that last clue, we have a BASS, and the G from GET HIGH (21A, “Smoke up”) joins the rest of GUITAR in ISN’T IT A PITY to get 23A.  It look me a while to figure out what was distorted in 48A, but then I saw that the S from ROOS (37A, “Jumpers with pockets, casually”, a fantastic clue) and the Y from ON RYE (42A, “One way to serve ham”) are the start of SYNTHESIZER fitting into JOULES.

63A: Ames Brothers oldie appreciated (aptly) by George the Janitor on “The Muppet Show” — RAG MOP

EDIT: I managed to completely miss that the three little bits of the instruments not in the across clues are ALSO in three non-standard down clues: 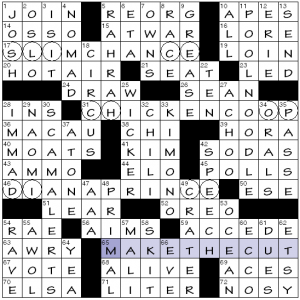 Phrases bracketed by synonyms for ‘cut’. Relevant squares are pre-circled.

Rather a standard-issue theme, and the revealer itself doesn’t fully make the cut; it needs a strong assist from the title. Nevertheless, a solid crossword experience. 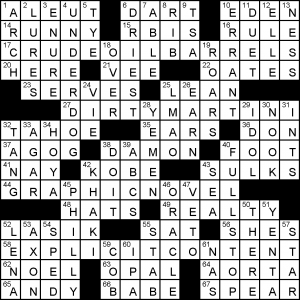 I’m not sure that the revealer in today’s puzzle theme by Tim D’Alfonso was intended as one. [Music industry advisory…], EXPLICITCONTENT works as well as a final theme entry as it does as a revealing answer. The first part of each of four long horizontal entries begin with a word meaning “uncouth”. It isn’t the most original theme, but I don’t recall it done with this synonym before. [“Maus” is the only one to win a Pulitzer Prize (1992)], GRAPHIC NOVEL; and [Cocktail with a splash of olive juice], DIRTYMARTINI are both fun choices, at least as theme entries. As a drink, a DIRTYMARTINI sounds like taking something disgusting and doubling down. Hell, why not add some nuoc mam in there as well. The initial entry of [42-U.S.-gallon containers], CRUDEOILBARRELS, though felt somewhat more forced, with its plural and it’s weird qualifiers.

The design of the theme today, with entries in the 4th and 12th rows, doesn’t lend itself to too much showing off in the rest of the puzzle. So it’s no surprise there aren’t too many more entries I’d like to highlight. 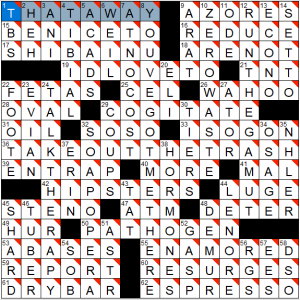 Smooth, smooth, smooth from Aimee today, and downright Weintraubian in the longer answers (check out YOUVE GOT ME THERE and TAKE OUT THE TRASH crossing in the middle). My only tiny quibble is that may favorite entry, THATAWAY [1a- Over yonder]. was the first answer in the grid. I had a fantastic “could it be?” moment, followed by entering some down entries and — I swear to you — face-breaking JOY when I confirmed it. I could not tell you why I love it so, but I do.

[Ultra-conservative movement] at 10d for ZERO WASTE is a lovely clue. I appreciate [Types once associated with American Apparel and P.B.R.] for HIPSTERS, as it’s certainly true that much of what once distinguished HIPSTERS is prett-y mainstream now. I’m not sure what the current signifiers would be.

If I had gotten to this earlier (it’s audit season), I’d probably have more to say, but here we are. Have a good week!