If you’re a first-timer attending the ACPT next weekend, I enthusiastically recommend signing up for the Cru Dinner. It’s a great way to start your ACPT weekend and meet lovely people. The Cru is nothing more than “the community of crossword solvers who met via the internet,” so that’s you, Fiend readers! The dinner buffet includes salad, vegan pasta with roasted veggies, roast turkey, bruschetta, rolls, and dessert. It’s $45 per person–hotel catering is never cheap, but on the plus side, the 6 to 8 p.m. dinner is on-site at the Stamford Marriott, so you it’s effortless to get there and you’re assured of not missing the Friday evening puzzle events. Reservations required. Details here.–Amy

I thought this was a rebus puzzle until the very end. Maybe if I paid more attention to the revealer I would have made sense of it sooner.

Speaking of which, 39a is LIFTOFF [Launchpad event, and a hint to four answers in this puzzle]. The letters OFF can be found lifting up—rocket-style—from the main theme answers into the crossing Down answers. 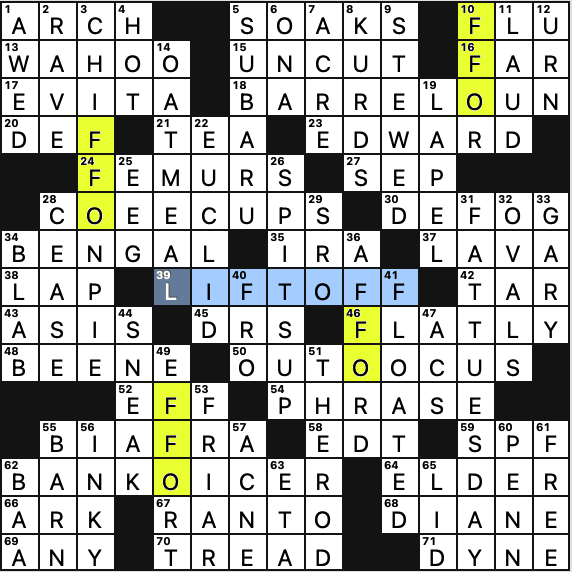 So I was confused for most of the solve. It seemed to me that those four key squares were rebussed OFFs in the Across direction and Os in the Down direction. I was thinking “lift” meant “steal” and so somehow we were to remove the OFFs to make sense of the Downs. But that didn’t work because we still needed the Os. Anyway, once I realized the correct usage of “lift,” I saw all the OFFs going up and I had my belated aha moment.

FAT TUESDAY tops the fun fill today along with SPITS UP, OATMEAL, EUCLID, and WAHOO. Don’t know that I ever heard of BIAFRA [Nigerian secessionist state of the 1960s] but all the crossings made it simple. Forgive me if I think it sounds very much like an allergy medication.

Once I grokked the theme, I liked it, especially since the OFFs look a bit like rockets on a launch pad. 3.75 stars. 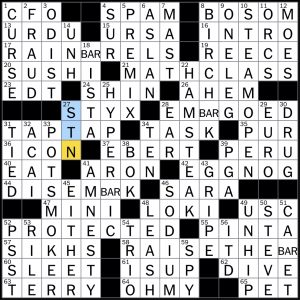 I had a hunch what might be going on with today’s NYT from the revealer:

and indeed, there are four answers crying out for a BAR square which has been raised above its final letter into the answer above

The BAR in RAIN [BAR]RELS (17A, “Sustainable water receptacles”) gives SUSHI BAR, EM[BAR]GOED (28A, “Banned from trade or commerce”) makes TASK BAR, DESEM[BAR]K (44A, “Get off”) finishes off MINI BAR, and the [BAR] in the revealer gives that last bit of DIVE BAR.  Benefitting from the extra letters, we also have [BAR]ISTA, BIRCH[BAR]K, HYPER[BAR]IC, and CA[BAR]ET in the downs

Rebuses with a twist. I knew something was up with 2d [Cohost with Springsteen of the podcast “Renegades: Born in the USA”] because the answer is OBAMA and there weren’t enough squares. (Much as I admire the title of that podcast as a slap to the birthers, I do wonder about a former President of the US and one of the most successful rock stars of all time branding themselves as “renegades,” but that’s not important now.) 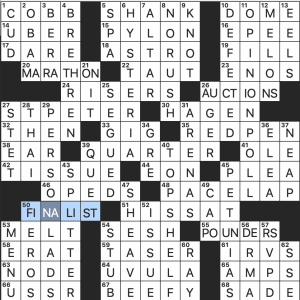 Either I’m missing some unifying element or this theme is kinda all over the place. I’m leaning toward the former, since both Peter and Tracy usually have nice tight themes. Fill me in, peeps.

What I didn’t know before I did this puzzle: that Uhlmann and Negrini make EPEEs in Germany and Italy, respectively. Peter is really committed to not reusing clues.

Theme: Each of the theme answers is a phrase that has been reversed from its usual iteration. 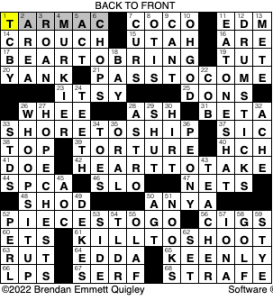 As always, so much theme in this puzzle! I struggled a bit at first filling in theme answers, thrown off by the fact that BACKGAMMON fit so perfectly into 52a. However, once the crosses took that out for me, I started to get a better sense (usually by filling in the TO of the themes as much as I could. As someone who still has a teddy bear, BEAR TO BRING was my favorite of these themers. 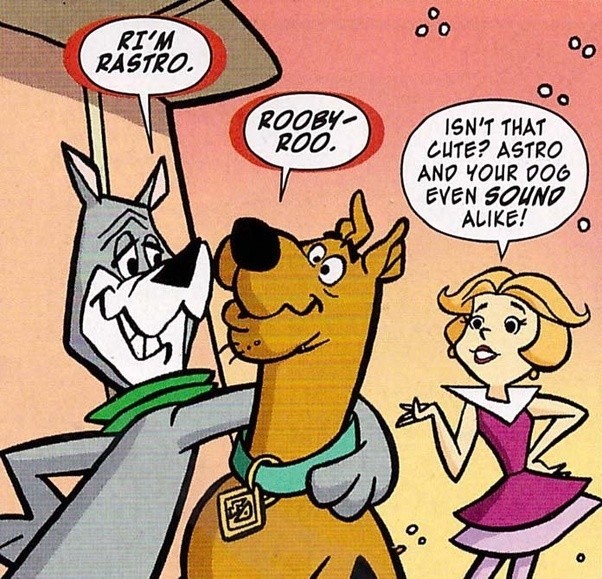 Unsurprisingly, I loved the longer down clues here with EAT ONE’S HAT, DRUMSTICKS, WHOOPS IT UP (lol) and HOPE CHESTS. There certainly did not feel like there were many black squares in this puzzle, which is surprising given the amount of theme jammed in here. As a researcher, I also particularly enjoyed 37a [“[You think I’m dumb enough to make THAT mistake?]”] SIC (though honestly, we’re all human and oftentimes SIC appears within a context where errors were hard to correct). Also, shout out to ASTRO from The Jetsons. My buddy.

There were a number of great examples of wordplay today in clues like 63a [“Boring groove”] for RUT and 58d [“Driving passion?”] GOLF. However, there were also a perhaps overly technical words that I had trouble parsing like 68d [“Attack, as a fighter pilot”] STRAFE, 49d [“Shakes on a rink”] DEKES, and 64a [“Norse mythologies”] EDDA. Still, overall, some great crosses to balance these out.

That’s all from me! See ya tomorrow!

Editor: Erik Agard
Theme: Each theme answer is a three word phrase where the first letters are T, B, T. 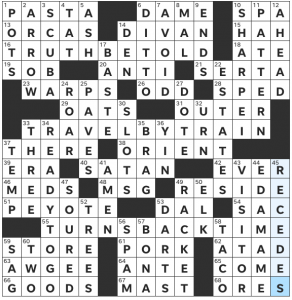 Cute theme and very appropriate for #TBT! (That’s “throwback Thursday”, if you haven’t seen the acronym).It’s impressive that none of the T or B words are repeated in any of the phrases. TRAVEL BY TRAIN is probably the weakest answer just because it’s not a very exciting phrase, but it’s still legit. TRUTH BE TOLD and TURNS BACK TIME are both great examples, and now I have Cher stuck in my head.

It took me a while to get into this puzzle (although that might be because I solved it first thing after waking up). I didn’t know any of the first three across answers I encountered: 1a [Trenette al pesto, for example] for PASTA, 6a [Title for Kiri Te Kanawa] for DAME, and 10a [___ + pool = spool] for SPA (that last one really threw me; I was thinking sewing. I’m still not 100% sure I get it – do people call a pool at a spa a spool??) I eventually found a rhythm and enjoyed the rest of the puzzle! SHAR PEI, READY TO GO, and EDAMAME were all great down answers, and I liked learning about the number of capital cities in South Africa (THREE) and Bolivia (TWO).

THEME: Words having to do with pace can be read backwards (or upwards) in common phrases. 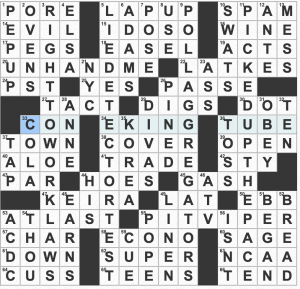 I suppose it’s a horse picking up its pace. I’m just seeing the hidden words for the first time since I solved on the webapp and Universal has yet to adapt its technology to utilize circles. Without circled letters, puzzles that should absolutely require them (like this one) I solve as themeless until the end as I do not want to count letters and read them backwards during the solve.

So as soon as I saw the frequently recurring Universal instructions about reading letter numbers __ to ___ , I was predisposed to enjoy this puzzle less than I normally would. I really don’t like counting and mentally circling my own letters. It brings my solve experience to a halt.

The themers were a bit tough for me as I’m unfamiliar with RIGHT TO WORK LAWS as an in-language phrase and POLL AGGREGATORS was not on the tip of my tongue. But sussing those out gave the puzzle some enjoyment for me.

I’m surprised that there are three UPs in the grid: PICKED UP THE PACE, PEP UP, and LAP UP. The past tense of the revealer I found odd as well.

Lastly, the dupe in [MoMA city] / NYC feels inelegant as the C in NYC stands for “city.”

Definitely not my favorite today, but I do appreciate the idea behind it. 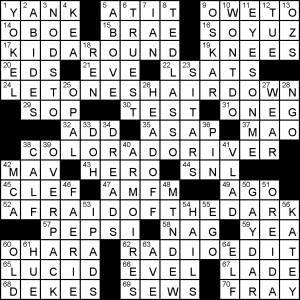 Joe Deeney’s puzzle theme today is one of those most of us, at best, went back afterwards and confirmed “yep, that checks out”. The vague revealer is a good entry in its own right [Shortened version of a pop song…] RADIOEDIT. It signifies that four answers have the pentagram RADIO scrambled somewhere in their bowels. We have: [*Be silly], K(IDARO)UND; only in dictionary definitions [*Loosen up], LETONESH(AIRDO)WN, [*Grand Canyon traveler], COLOR(ADORI)VER and [*Nyctophobic], AF(RAIDO)FTHEDARK.