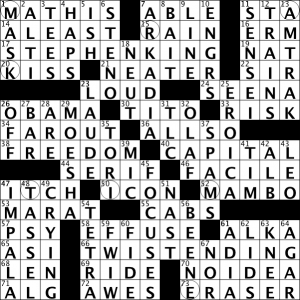 hello and welcome to episode #721 of matt gaffney’s weekly crossword contest, “I As in Interrobang”. for this week 4 puzzle, the instructions tell us that the answer is an eight-letter, two-word phrase that would’ve made a good title for this puzzle. okay. what are the theme answers? i don’t know exactly, but i’m guessing that the long clues that include unusual (for crossword puzzles) punctuation marks are all relevant:

looking over the clue list, those eight clues are, in fact, the only ones to have any punctuation at all. i don’t know for sure why this puzzle was only available as a PDF, as there’s nothing funky happening in the grid, but i am guessing it has to do with being able to display the punctuation the way matt wanted/needed for the meta; for example, the title Pet Sematary is in italics in the file, whereas a .puz doesn’t have italics so it would have needed to be in double quotes. likewise, the em dashes in the clues for LOUD and TWIST ENDING would not render correctly in across lite.

oh my god—that’s just it. if you take the initials of each punctuation mark in order, each clue spells out a word:

almost there! each of these eight words is an alternate answer to a clue for a different entry in the grid:

circling the first letters of those entries in the grid and reading them off from top to bottom gives MARK TIME, the meta answer. that’s actually the answer i was planning to guess if i hadn’t solved it, based off only the instructions and my sense that it was a punctuation-related theme.

this is quite brilliant. the last step—matching words to other clues in the puzzle that could clue them—is the only part of the mechanism that feels at all familiar, and even that one we haven’t seen for a while, i think. the idea of using punctuation marks as acronyms is entirely fresh and made for quite an aha moment.

well, i feel relieved to have navigated this month’s puzzles, but also exhilarated to have solved weeks 3 and 4, which are two of the best metas in recent memory. and i’m looking forward to seeing many of you in stamford this weekend!