Theme: ESPY AWARDS (57a, [Honors for athletes, and a phonetic hint to this puzzle’s theme]). Each of the familiar phrases in the other theme answers has been awarded an SP at the beginning. 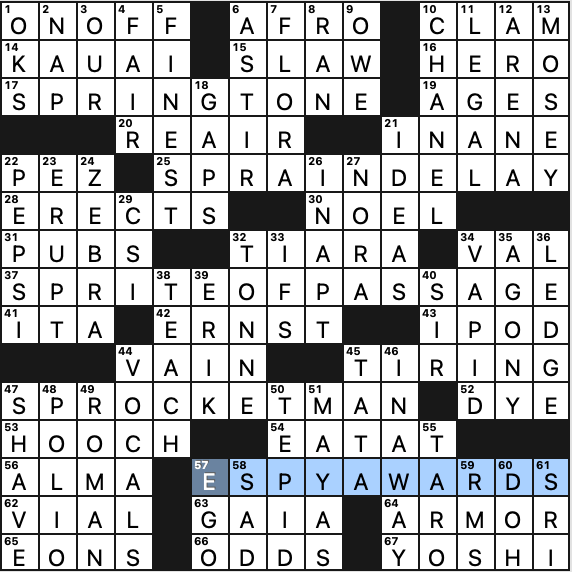 I enjoyed this. I caught on early, but couldn’t make sense of the title until I got to the revealer (“Best Play” is an ESPY Award). The revealer makes for a very nice play on words, and I also like the idea of “awarding” the theme phrases with the added letters. A subtle, but nice touch.

The fill is solid and smooth throughout, though there’s nothing longer than six letters to sink our teeth into. I would’ve liked to have seen at least a couple marquee long answers.

A solidly executed letter-addition theme. Some long sparkle in the fill would have been welcome. 3.5 stars.

Amy’s off duty for a while so I’ll throw up a grid and brief explanation. Each theme answer is a PUN on a name. 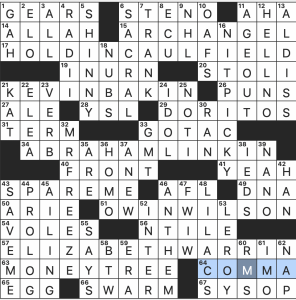 Fun and fresh idea! All the themers work. An enjoyable way to start the day.

And I know, I know that Will Shortz does not think dupes are a big deal. I still think SAVE ME and SPARE ME crossing each other is a bit much. OK, a lot much.

What I didn’t know before I did this puzzle: that India.ARIE has won four Grammys. 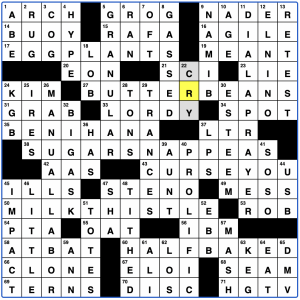 Today’s AVCX Classic is a debut from Zachary David Levy for the venue, and it’s 2/5 in difficulty

Taking the EGG, BUTTER, SUGAR, and MILK from the answers and leaving the rest, you’d certainly be most of the way to having a cake.  I’m not sure if these all being plants gives us enough of a flower/flour thing going on to finish that off, but again, you’re most of the way there. 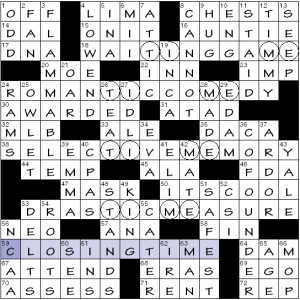 Have to brief this morning, but not due to any deficiencies on the puzzle’s part. 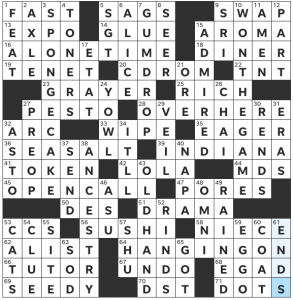 A very layered theme today from USA Today! I didn’t see the theme at all until I finished solving, but once I looked for it I was impressed. I guess there are a fair amount of words that can pair with “left” or “right” to make phrases, but I wouldn’t have guessed that so many of them made phrases themselves when combined, especially phrases interesting enough that they didn’t stand out to me as forced as I solved the first time. ALONE TIME is my favorite theme answer, and HANGING ON is my favorite when it comes to the left/right answers. 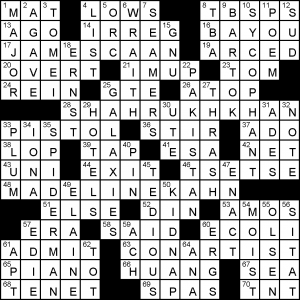 Today’s sounds-alike theme by Seth Bisen-Hersh is a little lop-sided. It features three people whose surname is pronounced “KɑːN”. The revealer is CONARTIST, which is pronounced “KɒN”. There’s also the little matter that CAAN and KAHN are both variants of the Jewish surname COHEN from what I can tell. KHAN is also semitic, but if there is a connection, it’s more distant. On the other hand, it’s great to see SHAHRUKHKHAN get a full-name shout-out in an American crossword. The other two actors are JAMESCAAN and MADELINEKAHN.

There was an interesting assortment of longer one-word downs today: PAKISTAN, SYCOPHANT, SPIDERMAN and GALAXIES. 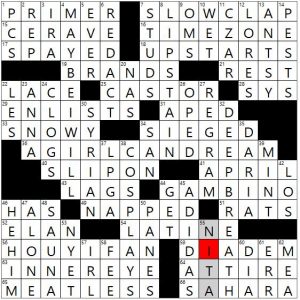 After Will and Paolo, Brooke Husic makes her TNY debut today. This was a *bit* more of a challenge than past Fridays (if I understand the difficulty correlations correct) but ultimately an enjoyable addition between Brooke’s work at USA Today and brainbusters at her own site.

The grid shape dictated my path through the puzzle — the long downs providing connectivity from the corners to the middle, and the center entry holding it all together, were all highlights:

This is not the first time I’ve seen LO-RES from this angle [12d Heavily pixelated, for short], but I couldn’t see the (implied) hyphen that I imagine the word has… fell for a trap with “CROCS” instead of CLOGS at 24d [Shoes often worn with scrubs] … a bit of serendipity with HOU YIFAN [56a Chinese chess prodigy who became a Grandmaster at fourteen], who I hoped to use in a clue for ELO in the puzzle Brooke and I had in the AVCX a few weeks ago.

Today in Things I Learned From Crosswords: Fashion designer ANNA Sui (23d, shoutout to Stella), and DARIA [35d 1997-2001 animated series with an upcoming “Jodie” spinoff], which I learned from a WSJ puzzle around New Years just a few months ago