This week’s Fireball puzzle is a contest. We will post a review after the deadline is past.

HANG TEN is the central revealer today (39a, [Surf, in a way, and an appropriate title for this puzzle]). The other (unmarked) themers are missing the letters TEN which are presumed to be “hanging” outside of the puzzle grid. 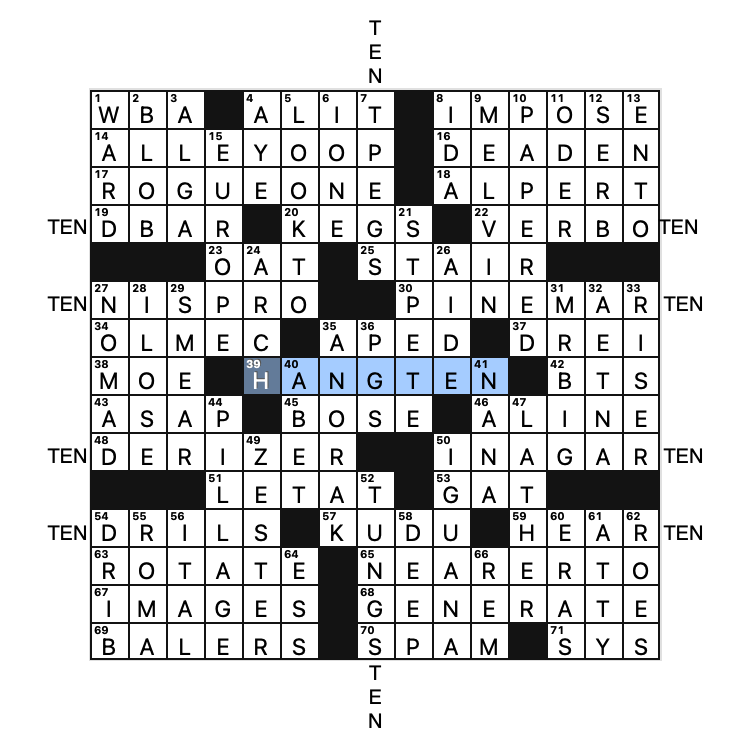 I loved this, even though I was slow to catch on. I sorted out VERBOTEN first but wasn’t sure if we were dealing with a rebus or letters that were “hanging” down (or up for that matter). The aha moment really came when I sorted out TENNIS PRO. Even still, once I was finished, I was wishing there were ten theme answers because I didn’t recognize DRILS and HEAR as part of the theme. Finally, a good smack of the head brought me to full theme realization. I like the fact that the entries are not marked with an asterisk forcing us solvers to make sense of things on our own. That’s appropriate at this point in the week. So, for the record, there are an appropriate 10 hanging TENs.

The only thing that I think would make this cuter would be if the hanging letters were actually TOE instead of TEN, but that’s probably an impossibility.

I also love that NW stack of 8s consisting of ALLEY OOP and ROGUE ONE (a Star Wars film). Elsewhere we got to enjoy PILLAGE, ANORAK, ZESTER, MR. BIG, and IGUANA.

Sure, there’s some tougher fill here like OLMEC, L’ETAT, KUDU, Craig MELVIN, ODER, and a single DRIB. But it’s Thursday, and the theme was fun, so I viewed all of that as chewy good stuff to supplement the satisfying theme. 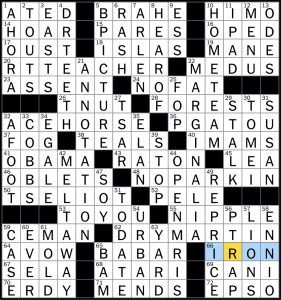 It was a pleasant surprise to see Oliver Roeder’s byline on today’s NYT, and even more pleasant to realize what was going on in the puzzle he constructed. 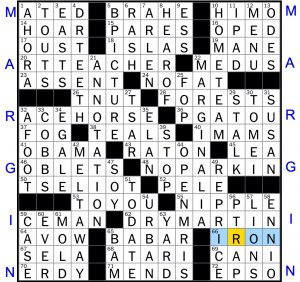 Filling in the letters that get cut off, we neatly get MARGIN on either side of the grid, and as suggested by 22D, this is our MARGINALIA (“Reader’s jottings … or a hint to this puzzle’s theme).  It’s very neatly done, and I enjoyed the extra AHA as I tried to piece together just what was missing on either end of the grid.

4D: Leader of the house band on “The Muppet Show” — DR TEETH

Whether intentional or not, I found a few nice references to Roeder’s fantastic book, Seven Games, that came out this January.  We’ve got MATED from chess and ATARI from Go (clued “Chess : check :: go : ___”). 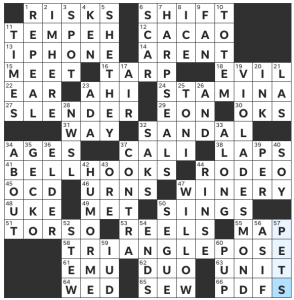 The first thing I noticed about today’s grid was the shape. Look at those 3×3 blocks in the corner! At first I wondered if they would be theme-related somehow, but nope, just some cool grid design. I think the high number of black squares probably helped decrease my solve time, which I’m not mad about.

It’s been a while since I’ve written up a diagonally symmetric USA Today grid, so it’s a nice change of pace. One reason that constructors sometimes use diagonally symmetric grids is because it allows theme answers of different lengths, if all the theme answers go in the across direction for example. That’s actually not what Brooke and Will did here – the theme answers still break into two pairs of length 9 and 12. That means they could have been laid out in a more traditional format, which makes the diagonal symmetry even more striking – with this layout, the theme answers need to cross, which constrains them much more than if they were all laid out in the across direction.

Even without the grid constraints, I loved the theme set the constructors chose. As a kid one of my favorite animals was HARP SEAL pups – they’re just so cute! I didn’t know VIOLA DESMOND, but her first name was easy to get through the theme, and all the crosses were fair on the last name. Other grid highlights for me included SHE/THEY, HUMOR ME, and the Princess Bride shout out at 6d [Facial feature of Inigo Montoya] for SCAR. 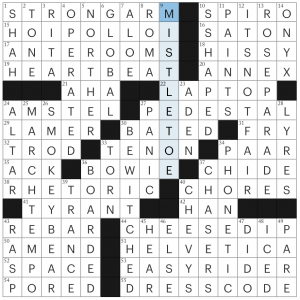 Hey squad! I’ll be switching to Thursdays so that I can continue to cover the easiest themeless puzzle. Speaking of which, I am very curious as to how the difficulties will end up. It’s super hard to calibrate the difficulty for themeless puzzles, especially New Yorker puzzles which have lots of proper nouns. I also wonder if these Thursdays will be equivalent to Fridays of Yore, or if they’ll be even easier– the blurb is different (“A beginner-friendly puzzle”). Fwiw, this puzzle was fast for me, for a Patrick Berry puzzle, although I did not finish. (Had to guess the ADE? / TENO? crossing.)

This puzzle had fourteen people in it– twelve of them are white. (And that’s me being pretty freaking generous given that the actors in “The Mikado” were, for the most part, not Japanese.)* This puzzle had the same amount of Jack’s as it did non-white people AND the same amount of John’s as it did non-white people. Patrick!! Come on!! This is so boring for me to talk about! I hate talking about it! Please stop doing this so that I can stop talking about it! (I’m sure he doesn’t read these lol and likely does not even know who I am.)

Other things: I will never learn the difference between lutes and LYRES. Never. I will simply write in L??ES and wait for crosses. Is it SMOKEY BEAR? I’ve always heard SMOKEY *the* BEAR. Leave your favorite fictional bears below– mine is obviously Paddington, although Pooh is up there.

THEME: Two movie titles are found in common phrases… I think. I solved on webapp. It doesn’t make sense. 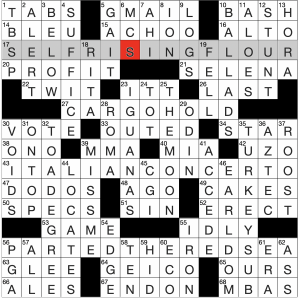 Not only are they asking you to count letters today… which is absurd in and of itself (Universal does not employ up-to-date technology to allow the inclusion of circles), but today, they are asking the solver to count the wrong letters for two of the entries.

It appears that the parenthetical instructions for the middle themers are in the wrong spot.

If this doesn’t give the powers that be at Universal the kick in the pants it needs to update its lousy software, then I don’t know what will. Counting letters in the first place turns newer solvers off from crosswords (from what I’ve observed first-hand.) This error is likely to make those who are new to the unique-to-Universal “count-the-letters” concept feel stupid when they can’t figure out what on earth is going on.

Could’ve been a good puzzle. But it was a disaster. Didn’t see a single themer during the solve and spent longer counting letters and scratching my head than I did solving the grid. Yeesh.

So distracted by the negative I am that I almost neglected to point out the fantastically clued TURKEY SUB [Hero that’s not chicken?]. Also enjoyed finding out Martin is the name of the GEICO Gecko.

Unfortunately those flashes of enjoyment don’t make up for the shoddy presentation today. Sorry your work was represented this way, David. It’s embarrassing for sure.

0 stars without the circles and with the typos in the theme clues.

Per its website: “[The Universal]… sets the standard for all daily crosswords.” As far as I know, it’s certainly not standard to ask solvers to count and circle their own (wrong) letters. 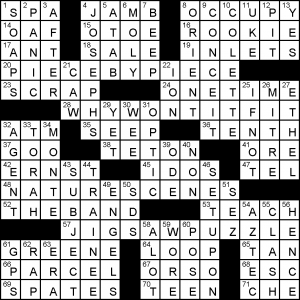 Today’s puzzle theme by Lin Josephson is the JIGSAWPUZZLE, but the answers before it are rather vague and incoherent. We start with a weak pun, PIECEBYPIECE; an unlikely hypothetical – WHYWONTITFIT; and then just NATURESCENES. And that’s it.

Brendan Emmett Quigley’s Crossword #1457, “Where Are We Eating?”—Darby’s review

Theme: Each theme answer includes a city and the food its known for, making a full meal. 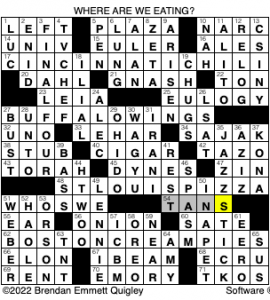 This was such a fun theme, and, as you can guess, I’m now pretty hungry. As someone who livd in Buffalo for a long time, I miss the wings daily, so BUFFALO WINGS obviously was an appealing answer to me. As an Ohioan, CINCINNATI CHILI was the first themer I filled in though, catching the many I’s and N’s off of the Down answers. I was shocked to see ST. LOUIS PIZZA over New York-style, especially since I avoid provel and opt to go to a New York-style shop here in STL.

Otherwise, this was a pretty fun grid, I got a wee bit caught up by some of the names, including 1d [“Medicine Nobelist Montagnier”] LUC, 53d [“He played Henry in ‘The Third Man’”] ORSON, and 35d [“Tool held by Buddy Rich or Gene Krupa”] JAZZSTICK. I also didn’t really want the reminder of 11d [“Kavanaugh’s benchmate”] ALITO. However, I did enjoy the timely clue for AMY in 64d [“Oscars cohost with Regine and Wanda”] and the pop culture colloquialism SUS in 65d [“Skeptical for short”].

Definitely a nice appetizer all on its own, just have your snacks prepared.