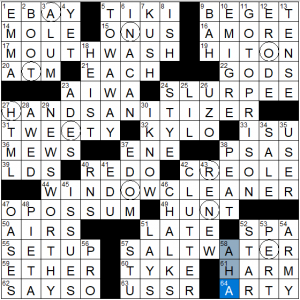 Today’s puzzle from Evan Mahnken is accompanied by a note:

“This puzzle has four different solutions. When you’re done, read the circled letters from top to bottom to find another one.”

I did not forget that it’s First April, and circles and an apparent theme on a Friday suggest something is up. Of course, I also April Fools-ed myself by agreeing to handle tonight’s puzzle while also needing to wake up at 3:30 to begin my trip to the ACPT tomorrow (See you there?).

Ultimately, as I often do when I’m not sure about a theme, I ignored it and powered through. And good that I did, because those circles aren’t Schroedinger squares, and the note is a cute misdirection. I got the second half first: the circled squares spell ANOTHER ONE. The first bit took longer, but it turns out we do have a theme: the four solutions are not four distinct correct ways to fill a grid, but:

Get it? Four solutions. He blinded me with science.

I’ve been a fan of Evan’s since his debut, and this puzzle is a fantastic addition to his portfolio. This is a *smooth* 78 worder – I didn’t feel dragged down by short stuff, at all, and the circled letters completely distracted me from the commonality among the actual themers. Not a lot of sparkle for me in the fill, but there doesn’t need to be with the theme and pseudo-theme drawing so much attention. And again, it’s a smoooooth grid. KYLO/UZO crossing at the O would have gotten me two years ago, but I’m familar with UZO Aduba now and as long as I don’t have to figure out “Rey” versus “Ren,” I can get by on my minimal Star Wars knowledge. Not much else to say, other than kudos and thanks, Evan!

Theme: Where in the world is CARMEN SANDIEGO (53a, [International thief hiding in either 20-, 26- or 44-Across (Follow her trail by reading all the clues’ starts!)])? 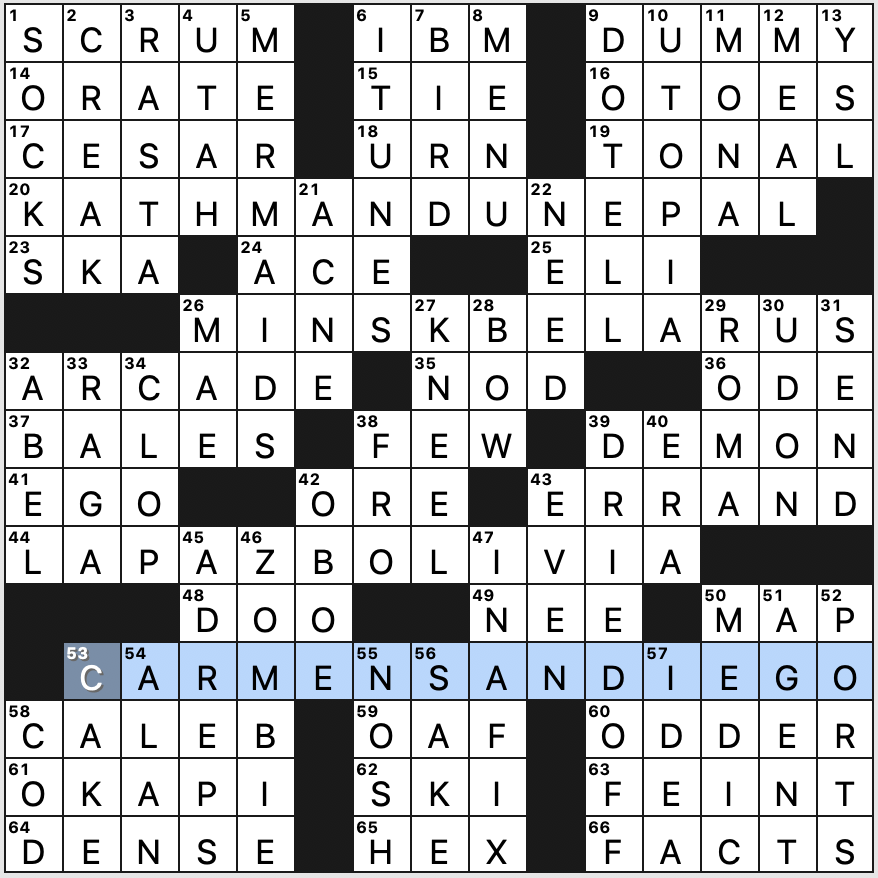 I was confused at first thinking there was some wordplay going on in the theme entries, but there isn’t—at least none that I can detect aside from the word DUNE in the first entry. It appears to be just a list of random world cities.

Except, that’s appropriate, because the mythos of CARMEN SANDIEGO is that you never know where she’ll pop up, and the show is all about teaching geographical and cultural factoids from around the world, so the clues are apt as well. Once I realized what was going on, I enjoyed the heck out of this since watching the newer series with my daughter was always a fun time.

So, looking at all the clues’ first letters (Across then Down), you find the message, “You have located her hiding within a safe hou/se at almost twelve thousand feet above sea level.” (A bit wordy, but who’s counting.) Aha! Without looking anything up, I’m going to hazard a guess that she’s in KATHMANDU, NEPAL. Who’s with me? To the Internets!

Should’ve gone with my first guess (or maybe I should’ve paid closer attention to the La Paz clue—doh!). Kathmandu is only at 4,600 feet above sea level whereas La Paz is at 11,975 feet, making it the highest capital city in the world (more geographical factoids!).

Again, I really enjoyed this. In my book, a puzzle should be entertaining as well as challenging and clever. This one ticked all the boxes for me. Looking back now, it seems some clues might be worded a little awkwardly, but I sure didn’t notice it during the solve.

The rest of the fill is solid with a surprising mini-theme of imaginary creatures—MERMAIDS, DEMON, ZOMBIE—and one imaginary place—UTOPIA.

I will leave it there. Did you find CARMEN SANDIEGO? 4.25 stars.

Theme: That’s a good question. I think that this may have been an April Fool’s puzzle, so if you have any good guesses for me, I can update this post if you drop ‘em in the comments.

Trick or treat, unknown, but what a patch of answers to bring together for us. I caught MAURITANIA on the crosses and chuckled as I filled in HARMONICA MUSIC. BRING IT ON was a nice 2000s throwback as well.

If this was for April Fool’s, PAGE TURNER was deceptive in clearly being both book-related and a longer answer, though there are no other Downs quite that length is this asymmetric grid. I enjoyed the 1d [“Duke University’s city”] DURHAM and 2d [“Chant from American fans”] USA USA in the upper left corner, and the likewise nicely aligned set of sevens in the upper right with 9d [“In harmony”] ATTUNED, 10d [“Amplified”] BOOSTED, and 11d [“Challenge”] CONTEST.

Also, I believe that this is Jasmine Lim’s debut! Congrats!

If y’all figure out the theme, sound off in the comments. If you’re at ACPT, have fun! 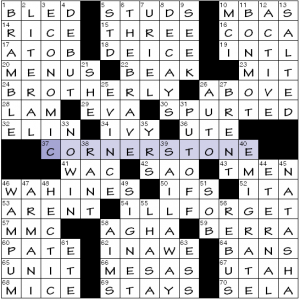 Several caveats before beginning this brief write-up: (1) I’m exhausted at the moment, which may be why (2) it took significantly longer than usual to solve this crossword and possibly why (3) even with the central revealer I don’t understand what the theme is.

Said revealer is 37a [Architectural marker, or what can be found four times in this puzzle] CORNERSTONE.

I’ve studied the corners of the grid for a while and see nothing stony there. There aren’t any notable long answers that read as ‘theme’. In fact, the only entry that seems to  have anything to do with stones is 66a [67-Across sites] MESAS, and that certainly doesn’t seem thematic.

Time for the clue run-through, which’ll be briefer than usual.

<code>BREAKING NEWS</code> A little bird told me how the theme works, and I’m astonished because it’s exactly the sort of thing I was looking for. Reading clockwise at each corner are four types of stone. MARBLE in the northwest, BASALT northeast, SHALE southeast, and oh-wait-this-one-is-counterclockwise PUMICE in the southwest.