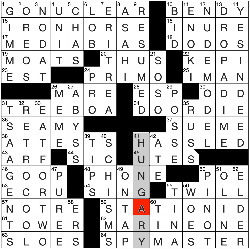 Sorry I gotta rush through this writeup and just point out a couple of things: One, that this puzzle could’ve been a lot harder, as my under-3-minute time attests. (Or maybe it’s just that I was in a hurry solving it and somehow made myself faster!) Two, that that UTES/RUSS crossing should’ve been clued in a way that allowed solvers who don’t know the trivia to rule out UTEP/RUSP as an answer. I guess the “Pac” in “Pac-12” should’ve pointed me in that direction, but to me it wasn’t out of the question and it’s pretty frustrating when trivia crossing trivia is what keeps you from a perfect solve.

Nice puzzle that could’ve been even better with a few harder clues and at least one easier clue at that crossing. 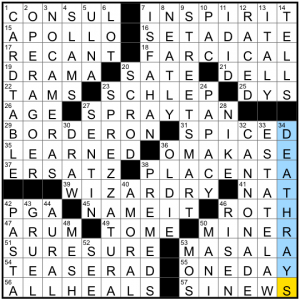 Oof, this was the hardest Saturday puzzle for me in a long time. It actually didn’t start out too badly – The northwest and southeast corners of the puzzle fell quickly for me – 2d [Met someone?] for OPERA GOER and 33d [Acts of will?] for ESTATE LAW were neat misdirects, but ones that I understood quickly. However, I had almost nothing in the center/southwest/northeast corners for the majority of my solve, and just had to look at PLACENTA and LEARNED and think “hm, I hope that I figure out some of these answers eventually!”

There were a couple reasons I struggled so much with this puzzle. First off, there were several answers I had never heard of before, most notably SPREZZATURA and ISFAHAN. These two answers in particular made it really hard to break into the corners. There were also some classically-tricky Saturday clues, either by being sneaky misdirects – I was certain [Short hooking pitch] was about baseball, but it was actually TEASER AD – or by being incredibly vague, like [Match] for SEE. Saturday speed is all about being able to get enough footholds to figure out the thorny clues, and today I just wasn’t on the puzzle’s wavelength when it comes to the references it makes  Actually, there are very few proper nouns here, which might have actually slowed me down since there were so few clues that had obvious answers right off the bat.

I’m only attending the ACPT IN SPIRIT this year, but I hope all attendees are having a wonderful weekend! 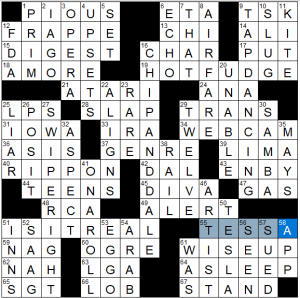 Lovely little theme today from Mark Valdez. We’ve got themers in the down clues:

Taking into account the in-the-language phrase serving as the title, we’ve got three methods of payment here. I didn’t see this midsolve, but it turns out I was misreading the title, which says “Pay,” not “Play.” Once I refocused, the theme is right there. I’m very pleased with how many transactions nowadays can be done with the chip. It was a long time coming. Tap payments, on the other hand, are absolute black magic to my brain, and I’m flabbergasted every time my wife pays for something by tapping her watch at the register.

Nothing else is jumping out. Say hi if you’re at ACPT and we haven’t met already! 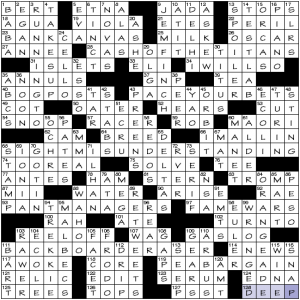 For this crossword, the theme answers drop the second letter, which in each case is an L, to wacky effect. 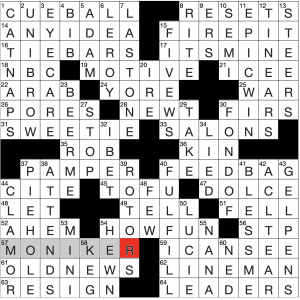 LEROY Neiman was new for me. Tawaf (which I’m assuming is akin to quinceanera?) was also new. Let me look that up… looks like I’m quite wrong. From pilgrim.co:

The term ‘Tawaf’ is derived from the Arabic verb ‘Taafa’, which means ‘to encircle something’ or ‘to walk around something’. In the Islamic context, Tawaf refers to taking rounds or encircling the Holy Ka’abah seven times in an anti-clockwise direction as part of Umrah or Hajj, starting from Hajr-al-Aswad (the black stone). It’s among the most significant obligations of both Hajj and Umrah, without which the greater and minor pilgrimage would be incomplete. When performing Tawaf, pilgrims recite Takbir and various other supplications based on the Sunnah of the Prophet s.

I also didn’t know “The Dream” was Hakeem Olajuwon’s MONIKER, but my knowledge of sports anything is quite limited.

Thanks for this one, Adrian!

Hope the ACPT weekend is a fun one :) 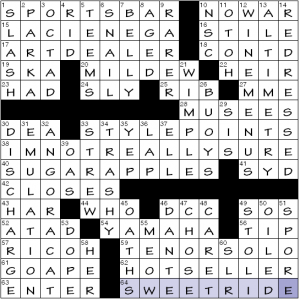 YEP (35d), this one was super-tough. With three main sections bottlenecked at two nexuses (nexera?) it was difficult to link up the areas I’d made minimal progress in. It was definitely a struggle from beginning to end this time.

And my last fill was one of the trickiest clues of all: 14d [Even now] REDRESSED; as in, we’re all even now. Was very difficult to disabuse myself of the notion that it was along the lines of AS WE SPEAK or UP TO TODAY.

In the northwest, 17a ART DEALER [Theo van Gogh’s occupation] was a gimme, but I was clueless about 15a LA CIENEGA, [Beverly Hills’ Restaurant Row]. Again, and as was the case throughout the crossword, so many of the short crossings were devilishly clued.

Just really tough all around. SUGAR APPLES? Okay, I guess I kind of knew that from somewhere. 59a [“Yesterday,” as first performed] TENOR SOLO—not sure I get this. Are we talking about the Beatles song? Is there common knowledge about it beyond the original nonsense “Scrambled Eggs” title?

I’m kind of wiped out (still), so I’ll call it quits here and springboard from 41a [15-hour flight from LAX] SYD: