The phrase “soft options” – the title of today’s NYT puzzle – was new to me, so I looked it up: the easiest of two or more possible choices. Let’s dive in and see if we’ll have some decisions to make as we solve! 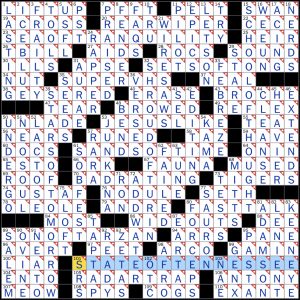 – 23A: SEA OF TRANQUILITY [Apollo 11 landing spot]
– 32A: SETS OF TONGS [Items used by barkeepers, barbecuers, and blacksmiths]
– 61A: SANDS OF TIME [Metaphor from an hourglass]
– 89A: SON OF TARZAN [Edgar Rice Burroughs novel, with “The”]
– 101A: STATE OF TENNESSEE [Its motto is “Agriculture and Commerce”]
– 15D: SCHOOL OF THOUGHT [Intellectual movement]
– 32D: SHROUD OF TURIN [Pope Pius XII called it “a holy thing perhaps like nothing else”]
– 39D: STARS OF TOMORROW [Entertainers with bright futures]

No decision to make at all! Instead, each of the them entries follows the form S___ OF T___ (spelling SOFT as a short hand). This felt like a classic device, which made for a more straightforward theme set. Most of the themers felt like solid phrases (SEA OF TRANQUILITY, SHROUD OF TURIN, STARS OF TOMORROW, etc.), but a few (SETS OF TONGS particularly) felt like green paint or at least not as uniquely standalone as the others, which made the puzzle slightly less enjoyable for me. I wonder which S___ OF T___ phrases the constructor had in his initial list that wouldn’t fit into the grid! Sense of touch/taste is the only one that immediately comes to mind. Can you think of more? Let us know in the chat!

Other random thoughts:
– 20A: REAR WIPER [Clearer in hindsight?] – Clever!
– 27A: AIDS [Helps] – This word has only ever been clued twice in the history of the New York Times crossword in reference to the disease that wiped out an entire generation of queer people: one in 2007 [___ quilt (modern memorial)] and once in 2016 [Affliction in “Philadelphia”]. I know it’s a tricky subject, but the NYT puzzle rarely ever acknowledging it feels like erasure of a pandemic that robbed us of so many.  Maybe it could be clued soon via the newly developing mRNA HIV vaccine, inspired by the same technology used in many of the COVID vaccines?
– 24D: RAPPER [Kid Cudi or Lil Baby, e.g.] – This feels like a missed opportunity to include more women/non-men in the puzzle. Including someone like Nicki Minaj in the clue gets to the same answer and shifts the puzzle toward more of a gender balance in terms of representation. The NEOSOUL clue at 51D does this well by including Erykah Badu along with D’Angelo.

That’s all from me. I hope you have a nice Sunday and a wonderful first full week of April!

Our theme consists of familiar phrases (that have nothing to do with filmmaking) re-defined as if they were tips on filmmaking. In each case, the phrase includes a word that has a specific meaning in filming. 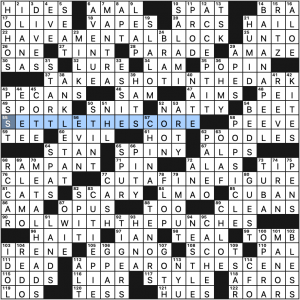 That was a fun set. Good choices on theme answers, and I especially liked how they alternated Do’s and Don’ts. I’m sure that was intentional. Maybe a subtle point, but an elegant one.

Let’s check out the fill. Look at all this good stuff: BANANA PEEL, POPSICLE, METALHEADS, “ACCEPT IT!”, CUTIE PIE, and ANKLE TAT (clued opaquely as [Pic under a sock, maybe]). That last one was tough to fill in but provided its own aha moment. Elsewhere there are POODLES and TIGERS running RAMPANT as well as a SALAMI SLALOM.

THEME: A letter (or a certain percentage of the entry) has been removed from common phrases to create wacky products one might buy at a grocery store. 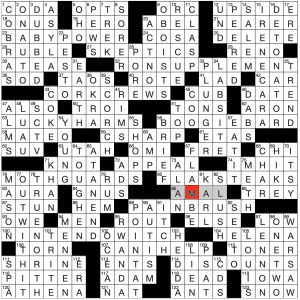 A clever take on a familiar theme. Cluing each of the entries as if they were discounted products (I haven’t done the math, but I’m assuming the percentages represent how much has been cut from the base phrase after dropping a letter) made this feel fresh. Also, a certain suspense built up for me as I knew the cut letters would spell something (in Birnholzian fashion), but I wasn’t sure what. Solving steadily north to south was the way to go as not to spoil by uncovering DISCOUNTS too quickly.

The themers were all pretty damn good too. My favorite being BOOGIE BARD (coincidentally, I was just watching a clip from the musical Something Rotten! where Shakespeare is indeed portrayed as a BOOGIE BARD). BABY POWER was a close second. LUCKY HARMS and PAIN BRUSH were enjoyable too, though side-by-side like that there’s something a tad disturbing about the pair!

Maybe one or two names that didn’t fall off of the tip of my tongue immediately, but far fewer new-to-me proper nouns than the WaPo average.

Overall, a lighthearted crowd-pleaser of a puzzle. Easily accessible to newer solvers with a clear, consistent theme. 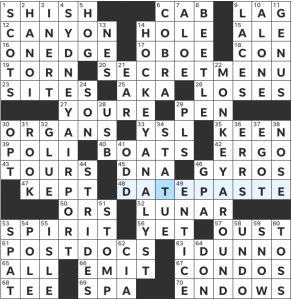 This was a great Sunday grid, and I came in with one of my faster solving times for a Sunday at under four minutes. I expected neither the AIRPORT nor the ANALYST of SYDNEY AIRPORT or HOCKEY ANALYST, but they worked well regardless. MONKEY AROUND was definitely my favorite of the themers. When I first started the puzzle, I thought that 20a [“List of unadvertised restaurant items”] was certainly going to be one of the theme answers at eleven letters, not YET having reached the Down cues (or really having looked as closely at the grid as perhaps I should’ve.

Short and sweet today, but I was definitely KEEN to solving this puzzle.

THEME: Things that can… get bent. 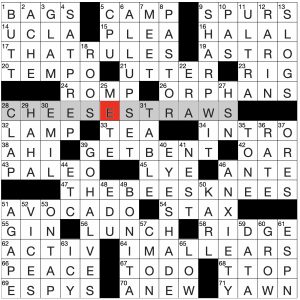 Interesting. I mean, rules bend, some straws bend, knees bend… but the revealer is telling us that they “GET BENT.” Which seems weird to me. I think it’s a syntax thing. Also, I think LEND when it comes to EARS, not bend (nor that they “GET BENT“).

Was just talking one of my high school senior students who is a Simpsons uber-fan. We were discussing the changes in Bart’s vernacular since the show’s inception. Like how he doesn’t say “Cowabunga!” all that much anymore. We didn’t discuss GET BENT, but I’m wondering if that’s something that he still says frequently?

Fill was just fine. Embarrassing confession : I know I read Jane Eyre at some point. I even saw the Broadway musical (yes, that exists). But it seems I can never retain anything about the story. Had no clue she was an ORPHAN.

CHEESE STRAWS? Is that a regional thing?

Not my favorite today, but well conceived with a strong grid.