Theme: Dinosaurs, as clued by what their name means. 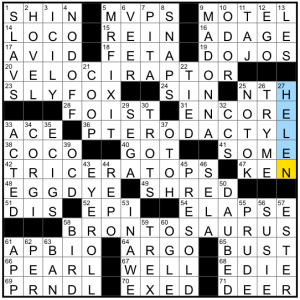 I’m so glad I get to review today’s puzzle, because anyone who knows me knows how much I love dinosaurs. Seriously, it’s reached “my friend gave me a glow-in-the-dark dinosaur blanket as an apartment-warming gift” level. So, I really enjoyed getting to put in so many dinosaurs into the grid today! That being said, even a dino-lover like me didn’t know the meanings of each name off the top of my head – maybe you’d have to love both dinosaurs and Greek for that. With the exception of TRICERATOPS, which I figured had to be the most famous three-anything related dinosaur, the clues for each animal didn’t help me much. I mostly solved each theme answer by getting a few of the letters via downs, thinking of a dinosaur that could fit in the slot, and then trying to retrofit their name back to the meaning. I’m also not sure what exactly TREX is doing down there in the bottom of the puzzle – is it meant to be part of the theme? A revealer? Just a fun bonus tie in? Whatever, I’m not mad about it.

Hope you all had a lovely weekend! 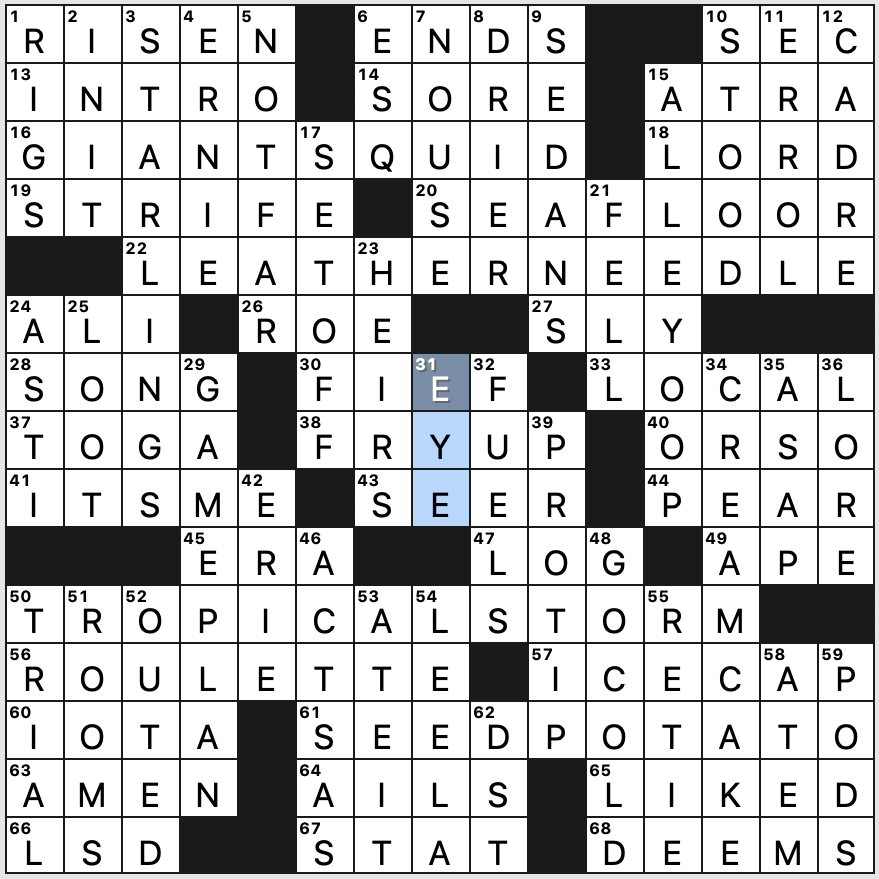 Since the clues seem to be focused on the sizes of the eyes, it would have been nice if these were presented in order from smallest to largest or vice versa. Instead they go from large to tiny to enormous to small. And why the focus on size, anyway? Three of these eyes aren’t used for seeing. That to me is more interesting. If a fourth could be found, that would be a more consistent theme.

Also, I have yet to figure out how to apply the title. If you’ve sorted it out, fill us in. Otherwise, I’m going to give this theme a meh.

I like the fill better. There’s STARLINGS, CREAM CAKE (I wanted CREAM PIES), GAME PLAN, SEA FLOOR, ROULETTE, and ALLEY OOP (which I feel like I’ve seen a lot lately). Also: GO COLD, PRO TIP, SET OFF, and NOT FAR. Plenty of nice stuff there and almost no gunky fill anywhere.

Clues fell on the straightforward side, so I will leave things there. Still have no idea with the title other than the fact that eyes are things you open, but beyond that…¯\_(ツ)_/¯ 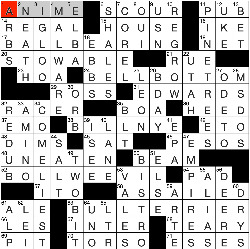 Here’s a theme of a type that was much more common in the aughts when I started solving, and feels like it’s fallen out of favor these days: the change-a-vowel. No revealer here; instead, each theme entry starts with a word of the pattern B?LL, and the theme words go through the five vowels in alphabetical order:

I think when you do one of these, the individual theme entries have to be really lively to make me take notice. All of these are legitimate in-the-language phrases, but IMO only BULL TERRIER rises to the level of putting a smile on my face. Coupled with the fill lowlights of ARBS, two RE-verbs (REGROW and REDUB), DRYS, COREL, and ODE TO, this wasn’t my favorite Monday. 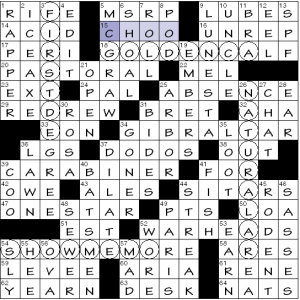 Right off the bat (40d [Guys who it the ball in cricket] BATSMEN) I want to say how impressed I am with this innovative theme using one of the more venerable subjects of crossword themes, US states. It’s a really fresh spin.

What we have are phrases beginning with the nickname—the key element, anyway—of a state immediately followed by the two-letter official abbreviation of said state. 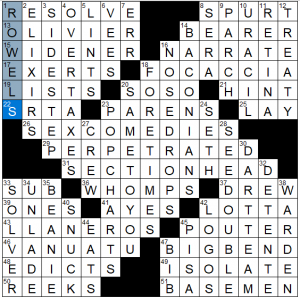 First things first, it was beyond lovely to see folks in person again–or in many cases for the first time–at ACPT this weekend. I’m still coming down from the high as I weave my way to JFK for the journey home.

Today’s themeless from BEQ is lighter than his killer Puzzle 5 from the tournament, but clearly I’m out of practice from rigorous solving, because for a moment I didn’t think I was going to finish the NW corner. Eventually replacing “Poitier” with the correct OLIVIER [13a Actor who cofounded London’s National Theatre Company], and “potions” for ELIXIRS [2d Apothecary’s creations] settled things nicely. But how about that trap there! I was helped by having seen a wall of spurs, some with ROWELS [1d Spiked disks on spurs] at the Briscoe Western Art Museum in San Antonio last fall (highly recommended), but one simpler error seemingly confirmed by another made that area tough to unravel. Oh, and while I can usually rely on sports knowledge for college-related clues, it took a while to see WIDENER [15a University in Chester, Pennsylvania].

Stepping back a moment, this grid shape is among my favorites for themelesses. If a constructor can nail the crossing staircases in the center, the corners are a nice middle ground of “not too open” and “connected enough to the center” that it’s possible to not have anything too yucky in the 6- and 7-letter fill. I didn’t love LINTS or POUTER, but there can be worse in themeless grids, especially … whoa, 62 worders. I did not realize the word count was that low until just now. Just lovely.

The true, true highlights of this grid for me today, though, were two clues that are each among my favorites in a while, and in the same puzzle:

No additional notes today. Have a good Monday! 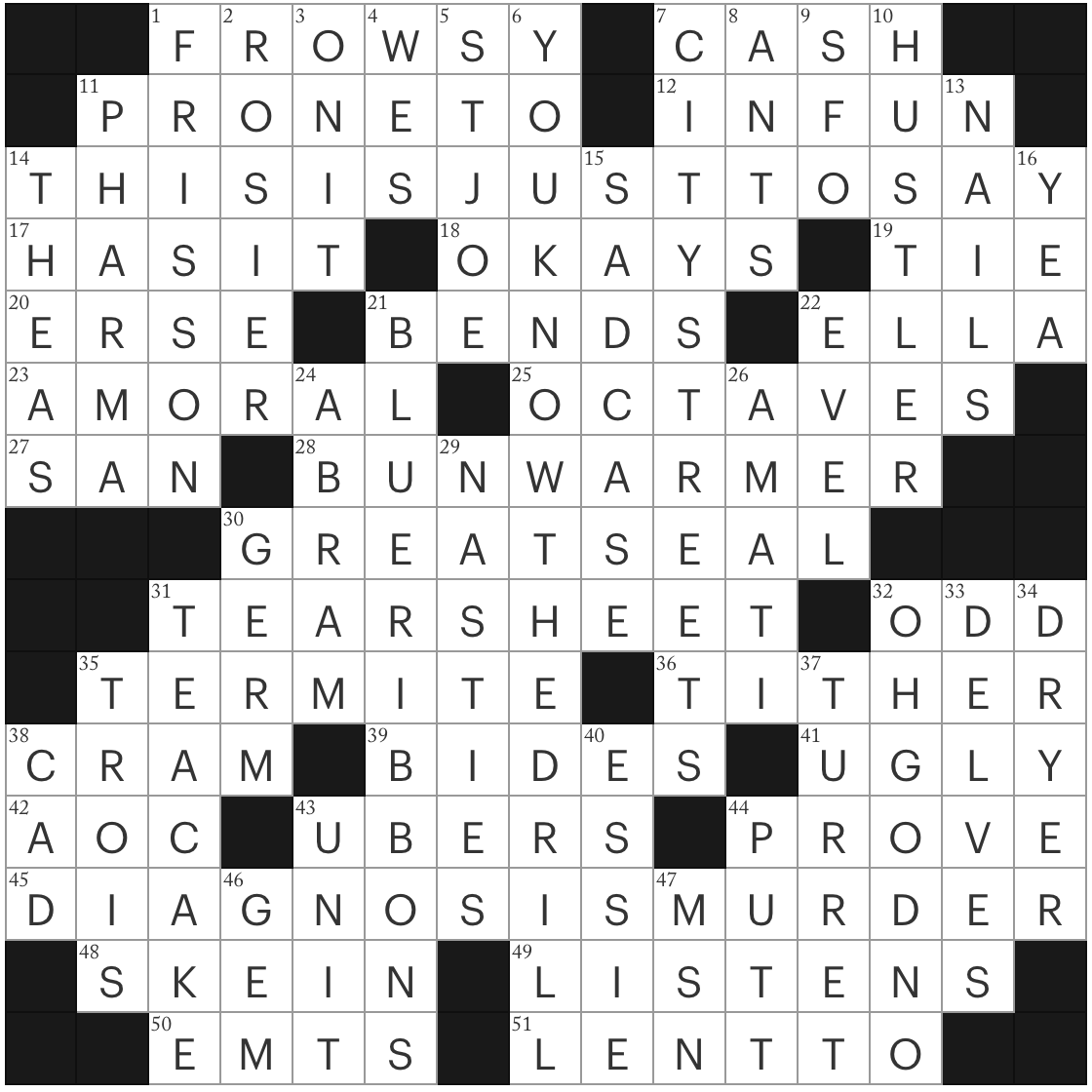 Tough puzzle today – especially with some post-ACPT puzzle burn out added in. A wonderful weekend – but I could’ve gone a day or two without solving. The bottom half of this puzzle fell first for me, with BLUE RIBBONS and DIAGNOSIS MURDER the easier long answers for me to get. I also enjoyed OH GOD NO and YOU KNOW THE DRILL. I always like seeing talk-y answers in a puzzle.

50A [Some music-festival volunteers: Abbr.] EMTS 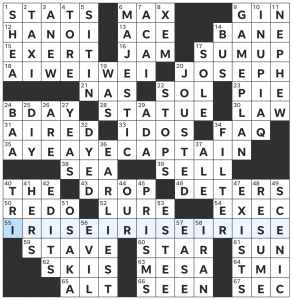 Good morning everyone! Here is a reminder that if you don’t like reading my reviews, you can simply stop reading right now. Have a great rest of your day <3

Theme: Each theme answer contains the sound “aye” one, two, or three times. Also, this puzzle contains a lot of Maya Angelou references, and runs on her birthday.