This week we’re looking a four-letter word. I looked for theme entries: VICARAGES and STRUCKOUT seemed like good candidates but I wasn’t sure about the others. I checked the title and spotted CAR and TRUCK in those two and I found the rest of the themers:

I identified four vehicles, now: find step two. I tried to “trade in” the letters of each entry for other letters, but the only word that matches V…AGES is VICINAGES, and that seemed… unlikely. I set the puzzle down, picked it up, and tried another trade-in program: I backsolved the solution by trading one letter for each vehicle. The answer appeared quickly. 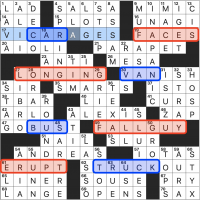 Some entries had multiple options such as DISH/FISH,  SCOUT/SHOUT/SNOUT, etc. But SWAP fit the title, and had to be the answer.

I raced past step two and circled back to find it. There it was: each theme entry was paired with an adjacent grid entry that served as an alternate definition:

The full solve confirmed SWAP as our contest solution. Another no-doubter by Mike. I’ll end with a cover of Kate Bush‘s Running Up That Hill by Meg Myers in a music video hand-colored by 2130 children.