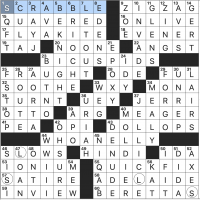 This month, we are asked, What seven-letter word is hinted at by this puzzle? The grid was tough, often a sign that it is constrained by the meta (which turned out to be true in this case). 1a (SCRABBLE, clued as “Game with 100 tiles, including two blanks”) jumped out as thematic. I was worried the meta was tennis-themed: my knowledge of tennis is quite weak. Fun fact: Googling taught me that “Two Sets to Love” is called a “double bagel.” In the end, tennis had nothing to do with the meta.

Peter said, I recommend that you solve this puzzle on paper. The clues are the same in the .puz file and the pdf, but the grid looks different. If you solve using the .puz file, look at the grid pasted below. I solve using .puz files (shown above on the right), so I checked the PDF, which showed squares over two L’s and two S’s (the .puz file showed circles). I inferred (correctly) that those four squares represented Scrabble tiles. I noticed two Q’s, two X’s, and two Z’s, so I checked the grid frequency distribution using Mechapuzzle:

The frequency distribution was off, and was too… distributed. Every letter was represented at least two times. I checked the Scrabble letter distribution, shown on the left.

I was very close to a solo solve… and I abandoned the correct rabbit hole. I kept trying to put letters on top of letters, or add letters to blank squares in the grid, etc. I asked my solving friend Gideon for a nudge, and he nudged me back to the correct rabbit hole. I built a spreadsheet containing both the grid frequency and the expected scrabble letter frequency. The Scrabble frequency was roughly half the grid frequency, and then I remembered the title “Two Sets to Love.” So I doubled the Scrabble frequency and tallied everything. There were two extra L’s and S’s in the grid (shown in red, and accounting for the four blank tiles); seven letters (ACEMNOR, shown in blue) were missing (and a Scrabble rack hold seven letters). Those letters anagram (Scrabble style) to ROMANCE, matching the title, and our contest solution.

Wow! That is an impressive meta, and quite a workout to solve (in a good way, IMO). There have been plenty of Scrabble-themed metas, but this is a fresh spin AFAIK.