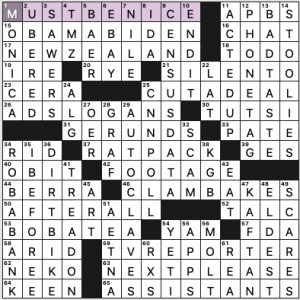 So I thought I had slowed waaaay down based on my solving time yesterday, but some other folks also found Caitlin’s Fri NYT to be tough. Then comes Sam Buchbinder’s Saturday puzzle and … I finish in a distinctly Fridayish amount of time. Anyone else feeling that “oops, Friday and Saturday should have traded places” vibe?

Got off to a delighted start with “MUST BE NICE…” right there at 1-Across. Other fave fill: NEW ZEALAND,  CUT A DEAL, RAT PACK and CLAMBAKES (these two feel like they belong together—the Clam Pack and ratbakes?), BOBA TEA, TV REPORTER, “NEXT, PLEASE,” DIRT BIKE, AUTOCLAVES (always nice when my history as a dental editor helps with a puzzle), CENSUS DATA (btw, amateur genealogists, the 1950 US Census records are now publicly available), PHONE TAG, and BAD TASTE. 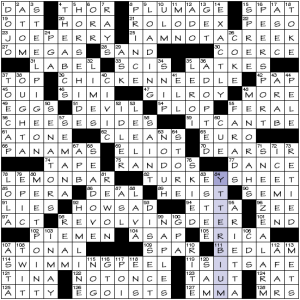 The theme answers substitute EE for OO, so the title needs to be taken as merely an example rather than an instruction.

This strikes me as a treading-water theme. It isn’t all that inspired or interesting, but gets the job done. Kind of analogous to the crossword ‘glue’ we sometimes describe as holding together an individual grid, except at the scale of a series of crosswords. And not as ugly as that stuff can be.

I kind of went all-in on the downs, and a survey of the non-theme acrosses didn’t arouse my interest much, so I’ll leave it here. 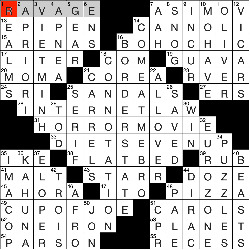 Another sub-3-minute time. Patti Varol’s new LAT submission guidelines are up, and they state that Saturday themelesses should present a “gentle challenge.” I’m hoping by this she means puzzles that aren’t quite THIS gentle on the regular. You know those “Keep Austin Weird” signs and shirts? I need to have a “Keep Saturdays Hard” shirt made.

That being said — not a knock on the constructor, who has made a really lovely grid with lots of wide-open spaces and no slop. That’s quite an achievement! Highlights:

So: I wish there were more zest to the clues, but awesome grid. 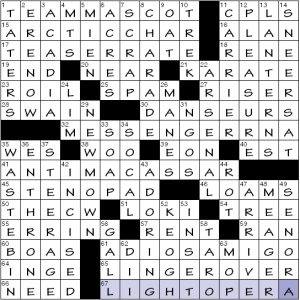 Phew, another workout from Stella.

This one was relatively smooth sailing—sure there a few stumbling blocks and hiccups—but the lower left section was a real bear.

Piecing that part together was tough. ERRANT? No, ERRING. ENSHRINE? No, ENTHRONE. (But could it have been something else altogether and was INGE really AGEE?)

And who could recall that there was a network merger in 2006 that created THE CW? What could be “loud on cabaret stages”? Wow, BOAS—needed many crossings.

In retrospect, I think the key was getting 29d [Well-manicured, in a way] NEW-MOWN. That more or less literally opened the door to the southwest.

Heavy stacks in all the corners: triple-tens in the northwest and southeast, vertical triple-eights to complement. And then a pair of 12-letter across entries flanking the midsection. 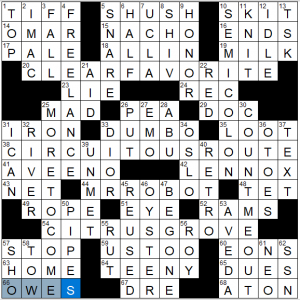 The letters of CITE “frame” each themer:

Some fun long downs as well, in MORE TO COME, FREELANCE, SEMICOLON, and COUNT ME OUT. Gotta run otherwise. See you Monday with the BEQ!