I think a steady diet of Spelling Bee and my recent foray in the world of cryptics has improved my anagram ability. That helped today. This is Grace Whitney’s world debut! Welcome to Crossworld. I look forward to seeing more of your work!

Each theme clue is an anagram of a spice. 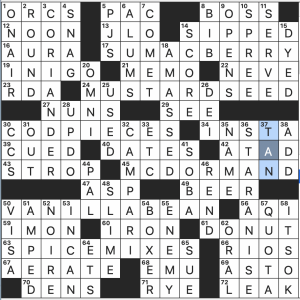 And the revealer: 63a [Masalas, e.g. …or what the starred clues in this puzzle are] is SPICE MIXES. Nice! Also tasty. We’re cooking for Pesach so the SPICE MIXES around here are heavily weighted toward salt and garlic with a bit of cinnamon and ginger for the charoset.

What I didn’t know before I did this puzzle: never heard of a thirst trap before. 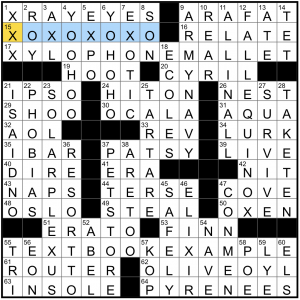 A lotta long answers in the 7- to 15-letter range, a lotta 3s, and also an awful lot of X’s. I didn’t see a ton of the clues for the 3s so never noticed dull KOP and ELS, but certainly did take note of fave fill X-RAY EYES, XOXOXOXO (I usually stop at xoxoxo), XYLOPHONE MALLET, TEXTBOOK EXAMPLE, OLIVE OYL, SOLAR PLEXUS, the goofiness of the YOO-HOO/YO HO HO pair, the ARMY-NAVY game, ELIXIR (one of my favorite words), and FALL EQUINOX (what, the editors couldn’t run this 7 months ago or 5 months from now?). 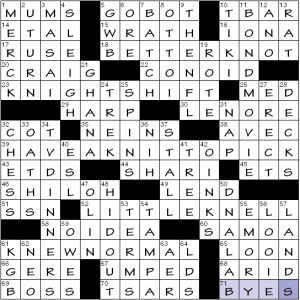 This one played harder for me than most LAT Fridays. Rather than filling it from one section to the next, I ended up making disparate inroads here and there before I was able to see enough of the the theme answers to understand them, and then slowly draw it all together.

Feels as if the clues were a bit more obscurant than usual?

Back to the theme. We’ve got silent-K homophones of words beginning with N, and appropriately wacky clues.

I would be surprised if this isn’t territory covered by one or more previous crosswords, but that doesn’t diminish my enjoyment here.

Theme: CENTRAL TIME ZONE (59a, [Region for Bismarck and Montgomery, and a hint to the middle three letters of 17-, 27- and 45-Across). The other theme answers are familiar phrases with abbreviations for the other time zones found in their very center. 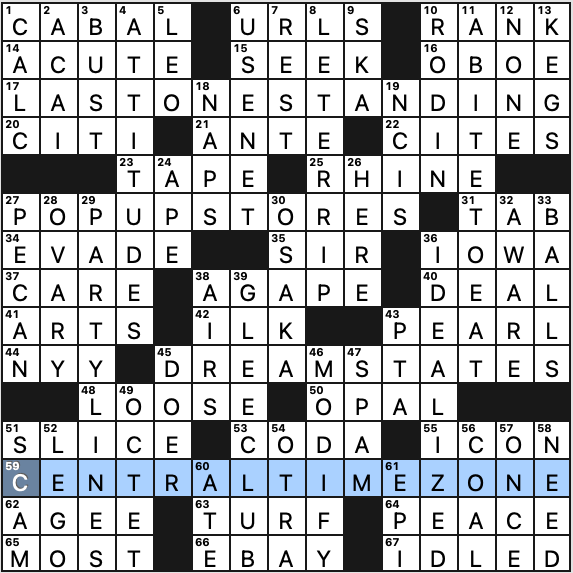 I didn’t know what was going on until I got to the revealer. Then I went and searched out those middle three letters to find the other time zones. I have to admit I was underwhelmed. Having to find a TLA in a theme answer doesn’t feel like much of a theme, especially when the letters in question are very common ones. It also would have been nice if they were presented in geographical order, either east to west or west to east.

I do give props for the constraint of having the abbreviations in the exact center of each phrase. I’m sure that limited the selection pool quite a bit.

On the other hand we do have some meaty long fill to enjoy. A BITE TO EAT and PARTY LINES top that list along with GLEE CLUB and “LET ‘ER RIP!” There’s also teen ATTITUDES and IDEALIZED. I always like seeing USENET [Early online forum] and wonder how many solvers today ever actually used it (I did). 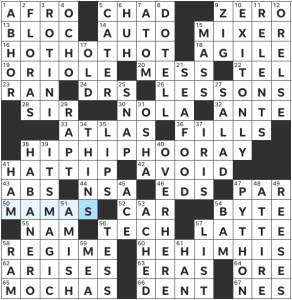 I loved this set of themers. They’re so fun and Friday appropriate. As the week ends, I definitely feel the HIP HIP HOORAY vibes. Plus, I love the continued normalization of pronouns in the USA Today puzzles, so I was delighted to see HE HIM HIS as a themer today.

This asymmetric grid has some fun black square patterns, and it all works well with the fill. Having EXIT ONLY, HABANERO, OVER HERE, and IT’S MAGIC made for a lively grid. I think it’s one that stands even without its clues (though that would make for an extra difficult solve).

Some Friday favs include:

Would recommend this puzzle over and over again. You should check it out – 12d [“‘Otherwise…’”] OR ELSE.