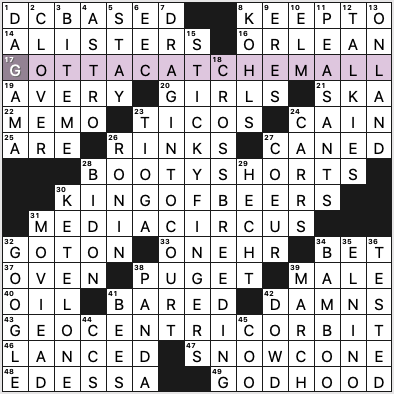 I may not love every single entry in this puzzle, but I tell you, plunking the [Line of Pokémon] “GOTTA CATCH ’EM ALL” across the top like a banner makes up for a lot. I have a number of crossword friends who are Pokémon Go players, like me. We have a good time! (Shout-out to anyone else who’s still missing a shiny Rockruff.)

Other fave fill: Susan ORLEAN, GIRLS Who Code, TICOS (I have a Costa Rican cousin-in-law), BOOTY SHORTS, the KING OF BEERS (raise your hand if you feel that Budweiser is, indeed, the King of Beers—anyone?), MEDIA CIRCUS, SNOWCONE, lucky CLOVER, “BITE ME,” KETEL ONE vodka, DRAG INTO COURT, STICKY FINGERS, and PEASANTS. Neat center twist with the staggered 11s crossing a set of 13s.

Less keen on D.C.-BASED, ONE HR., EDESSA (if you’ve heard of the Greek town or its Mesopotamian namesake, it’s from crosswords, isn’t it?), awkward MOVIE AD, and the “on” trio of ON LAND, GOT ON, and BID ON.

It’s neat that the constructor’s first name, minus the N, anagrams to his last name.

3.75 stars from me. Loved the juicy bits, wished some of the surrounding fill were smoother. 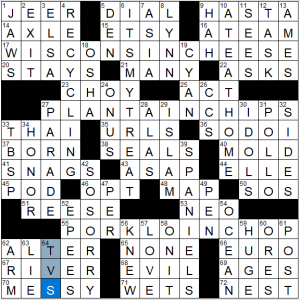 Our themers are all food items, with the word INCH embedded across a word boundary:

Oh hey, the puzzle is asymmetrical. Didn’t notice til now.

I learned more than normal from even a USA Today puzzle – so refreshing! Let’s get right to it: 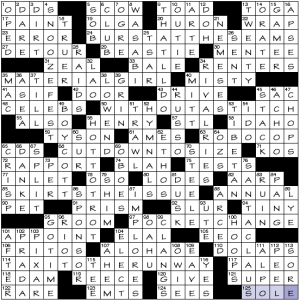 Some punny phrases regarding fashion, presented as a mini-narrative.

I suppose it’s interesting how some of the phrases are originally about apparel but have become adapted metaphorically to other situations, and then to see them boomerang to be reapplied to the original context. Otherwise, the theme didn’t really grab me by the collar.

The crossword wasn’t precisely a slog nor a 4d SNOOZEFEST, but during the solve I was keenly aware that this was a 21×21 grid, which is an indirect commentary. 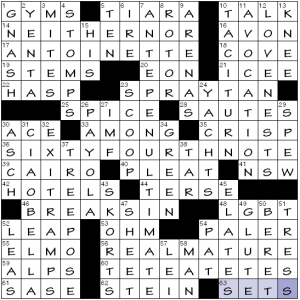 Yet again, another Stumper that lives up to its name by initially seeming nigh-impossible and then by degrees yielding to to diligence, exploration and applied pressure.

A big breakthrough came when I realized that the grid-spanning down entry—7d [Nearing the end]—wasn’t going to have TIME near its own end, but instead ULTIMA… aha!… ULTIMATE; that left figuring out how many prefixes were needed, and it turned out to be ANTEPENULTIMATE. Didn’t have to go as far as preantepenultimate.

After that, with the help of some entries I’d already gotten on the righthand side, the NOTE and FOURTH elements of the central 15-letter across entry, I was able to complete SIXTY-FOURTH NOTES at 36a [Brief musical excerpts]. Were I more conversant with music I certainly would have figured that one out sooner. (In Britain they’re called hemidemisemiquavers or semidemisemiquavers—too long for this grid!)

The next big gain was the cross-referenced 31d [“Hello, gorgeous!” in some parts of the 59 Across], which could have been a dead-end if the the other clue simply referred back to the first. Mercifully, the clue was extremely helpful. While 59a turned out to be the ALPS, which could indicate one of a few European languages, [Where the Po rises] invokes an Italian river, hence CIAO BELLA. Big help.

Other turning points included resolving dilemmas such as: 48a [Q preceders] as LGBT and not MNOP; 49d [Thigh-rotating aid] as GLUTE, not ILIUM; 23d [Parlor implement] SCOOP rather than STROP; 62a [What a toaster may hold] STEIN not GLASS; 35a [Bracing] CRISP not BRISK.

Another challenging Saturday workout. Kudos to Stan and his stable of constructors for consistently pitching the difficulty just right, even thought it may not seem so at first. 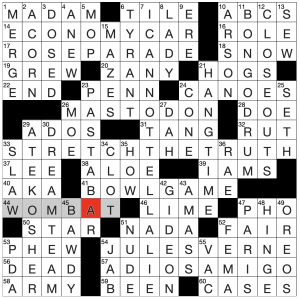 Love those crossing seed entries I CANNOT TELL A LIE / STRETCH THE TRUTH. What an excellent juxtaposition!

Lots to like in this puzzle. I mean, any puzzle with BONGO DRUM [Salsa ingredient?] as an entry can’t be that bad. That’s a law, I think. Enjoyed PASTA BAR as well, though I saw right through the trickery in the clue [Where bow ties are on display] and got if off the P.

My favorite mistake was ATE NO MEAT for ATE KOSHER. I rolled my eyes entering ATE NOT MEAT thinking That’s not a phrase! I can’t believe that made it in as an entry. Well, it didn’t. ATE KOSHER, on the other hand: definitely a thing.

BOWL GAME to me sounds a bit vague. Could that be referring to any BOWL- as in post-season football? That’s what google seems to think. It’s odd that such a vague term is clued so specifically [New Year’s Day event]. But maybe I’m misunderstanding something. I know very little about sports events on New Year’s Day, when I typically just lay in bed all day regretting the night before. 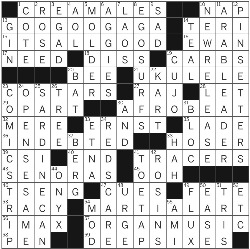 A few highlights since I’m short on time:

All these nice long entries did come at the cost of a lot of 3s and 4s, but hey, one of them was a reference to Mario KART which is basically bait for me.