Today’s theme answers are familiar phrases whose seconds words can also be loose synonyms of “invoice.” The entries are clued wackly using this synonymous meaning. The revealer is TRUMPED-UP CHARGE (58a, [Fabricated accusation, or any of 17-, 33- and 42-Across?]) 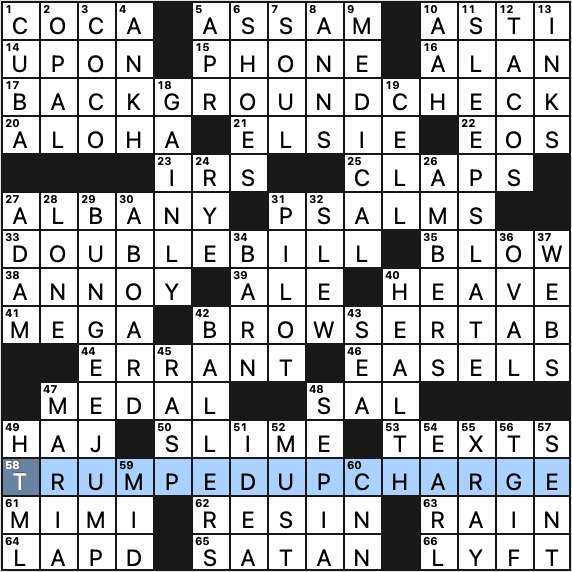 Plenty solid. I was skeptical of using “check” as a synonym for “invoice,” then remembered we use it this way at restaurants (“Check, please”).

I’m less clear on how these are TRUMPED-UP CHARGEs. I get that we’re using the word “charge” here as an item on an invoice (as opposed to an accusation), but how are they trumped up? Maybe it’s just that they are in fact fabricated entirely for this puzzle’s purposes. Okay. Works for me.

Can’t help but notice that the definition of TRUMPED-UP CHARGE, as given, is at once punny and accurate for the right-wing loony-bin conspiracy theory that there was widespread voter fraud in 2020. The accusations seem to continue unabated. It’s sickening to see those who have lost all sense of reason still wield so much power in this country.

Moving on, we have SLEEPS LATE and BUNGEE JUMP topping the fun fill. GAINLY [Graceful] is not a word you see very often, making it feel somehow ungainly. 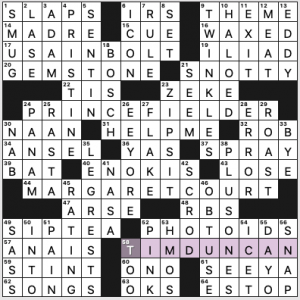 Today’s theme feels old and done-before to me, since we have a similar 2014 puzzle over at Crosswords With Friends that repeats two of these themers, and constructors have pitched similar “sports aptronyms” themes in the years since. Your mileage likely varies!

Did not love the COURT and DUNCAN variances from the more consistent vibe I got from BOLT and FIELDER … though I guess FieldER is different from Field and therefore each of the four themers stands alone. Not the tightest theme, I don’t think. If you’ve never seen a riff on this already (and you aren’t offended by giving Court attention), you likely enjoyed it more than I did.

Three stars from me. How’d the puzzle treat you?

Before we dive into this week’s AVCX, a few quick words about last week’s variety puzzle from Paolo Pasco: that variety type is one of my favorites, and last week’s edition was very fun and very challenging, but it’s also a puzzle type that doesn’t lend itself well to the same kind of blogging as a crossword.  I hope you’ll take a look at the solution included with this week’s AVCX classic, since that breaks things down well and does a beautiful job of explaining how the meta works within that grid.

Alright, onto this week’s puzzle: 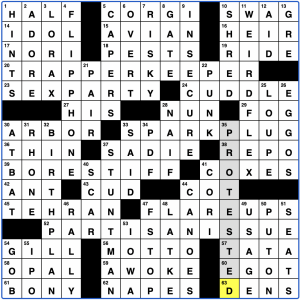 Michael Lieberman makes his AVCX debut this week with “False Fronts”.  That title does a great job of hinting what’s going on:

Each of the answers is a real word or phrase, but if you remove the “false front” of their first letter, you get the wackier phrase being clued – RAPPER KEEPER, PARK PLUG, ORE STIFF, and ARTISAN ISSUE.  It’s cute, though the meta from last week had me looking at the letters being ignored to see if they were doing something else atop all of this.  I didn’t spot anything, but I suspect the comments will call out if something’s whooshed past my head.

Here’s a fun sketch from this weekend’s SNL with Lizzo, depicting the directors of an ancient SEX PARTY (23A, “Coming attraction?”).

Other nice fill: CORGI (“Breed the AKC calls “a big dog in a small package”), TEHRAN (which I learned is “at about the same latitude as Tokyo”), FLARE-UPS, FLIP PHONE, WEIRD FLEX (“Not sure why you’re bragging about that …”), PROTESTED, and STUNT MAN

Editor: Erik Agard
Theme: The outside letters of the theme answers form the word JEST 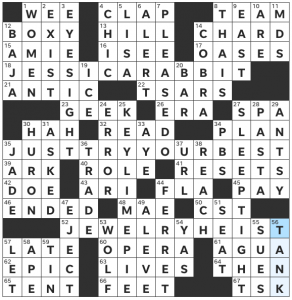 I love the title of today’s puzzle! It’s a fun phrase and perfectly encapsulates the puzzle’s theme. It’s cool too that the “jest” letters are split differently in each answer. In terms of the answers themselves, JESSICA RABBIT was an instant drop-in for me, but the other two took a bit longer. I wasn’t sure what exactly the phrasing was on JUST TRY YOUR BEST even though I had a general idea of the answer. I had also never heard of Doris Payne so I thought the “job” referred to a profession rather than a JEWELRY HEIST. 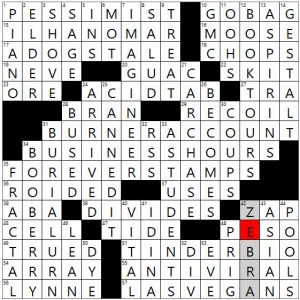 Well today has gotten away from me, which is a shame, because I could write many many words about this gem from Paolo. It felt like a quick solve, but was actually a bit longer than average for me. I chalk that up to some fantastic clues that I let myself savor. A few favorites: 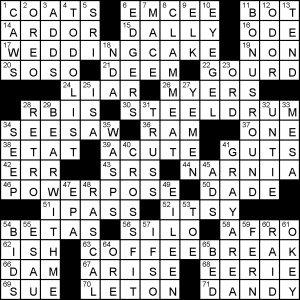 I do believe this is the first LA Times I’ve blogged with Patti Varol as editor and Christina Iverson as asst. Welcome Ms. Iverson and welcome to the limelight, Patti!

And the puzzle is by Ms. Zhouqin “CC” Burnikel, a name I feel I used to see a lot, but haven’t for awhile! And one whose grids are always full of polish and interesting grace notes! The puzzle provides four examples of an uncommon clue trope, where the clues are imperatives. Here each clue is a “>VERB< that” phrase and “that” is a possible example of a thing you can “>VERB<“. Clear? So [Top that!] is a WEDDINGCAKE. Is topping a cake different to icing it? [Beat that!], STEELDRUM – wanted SNARE first, which is less beatable! [Strike that!], POWERPOSE and [Take that!], COFFEEBREAK. Weird concept that, coffee breaks, at work!?

I feel like Zhouqin will always include a few East Asian clues in her puzzles so not surprised to look up Kabocha in [Kabocha or pumpkin, e.g.], GOURD and find out it’s a Japanese squash. Similarly, OREO is a [Cookie that has a lychee flavor in China]; I notice Americans favour the spelling “lychee”, but rarely see anything other than “litchi” here.