Note: Fireball is a contest this week. We will have a review once the submission period closes.

I’ve seen this theme type before and it’s usually good for some yuks. We have two-word phrases in which the second word’s beginning S switches teams and is read as the last letter of the first word (usually as an “apostrophe S”). 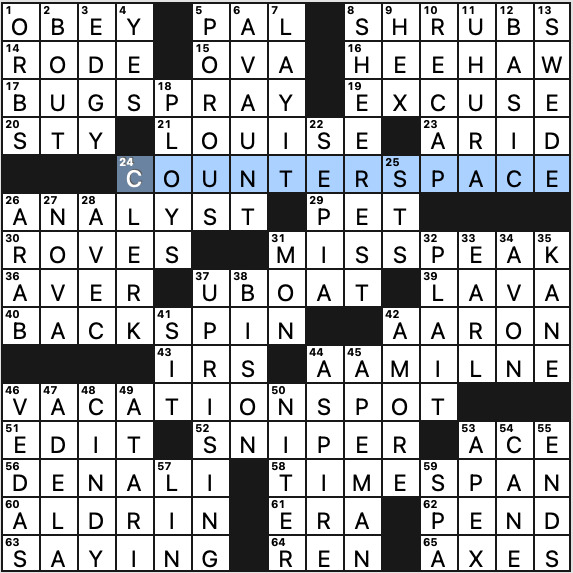 Note that all the second words start with P, and that explains the title which we can now re-parse as “S-to-P Gap”. In other words, the “gap” between the S and the P is the issue in this puzzle.

Ok. I’m on board now. It’s a subtlety, and the casual solver might not catch on, but I’m in favor of the tighter theme. As for the yuks? Well, none for me, sadly, maybe you fared better.

Looking at the fill I’m thinking it could’ve been improved with fewer themers. Our long entries are SHEEREST and UPRISING, not the sparkliest of fare. Then there are all the A-words. How do I log thee? Let me count the A’s: AVAUNT, ARID, ANALYST, ARAB, AVEC, AVER, AVON, AARON, AMORE, A.A. MILNE, ASPIRE, APEMAN, ADELA, ATARI, ALDRIN, ACE, APEX, and AXES. That’s 18 out of 76 words for nearly 24% of the fill. I was beginning to wonder if this wasn’t part of the theme. Nothing against any of these words in particular (except maybe APEMAN), but it got to be a repetitive drag that could have been alleviated (ha!) with one fewer theme entry and a refresh of the fill.

I like the wordplay in the theme, but too much of a good thing isn’t always best. The fill could do with a makeover. 3.25 stars. 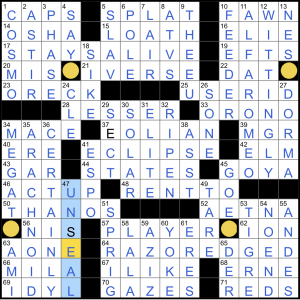 Max Chen Lauring is behind today’s NYT, and we’ve got a SOLAR/ECLIPSE on our hands (30D: “With 41-Across, a celestial event … or a hint to four squares in this puzzle”)

As suggested, four black squares in the puzzle can be treated as a blocked-out SUN, affecting both the across and down answers:

5D: Ukranian, for one — SLAV
Here’s what Ukraine’s Kalush Orchestra is sending to Eurovision this year.

Theme: The quips referred to in this puzzle spell out a quote from Ali Wong: “Yoga is Simon Says for adults who have lots of free time.” 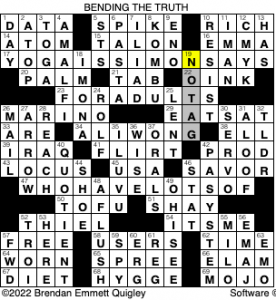 I think quote puzzles are so fun, even if you aren’t always familiar with the quote itself. I’ve seen a few of ALI WONG’s specials, but I wouldn’t have known that this was her quote without additional context. As a result, the grid is very dependent on the crosses, especially for the shorter parts of the phrase like WHO HAVE LOTS OF, FREE, and TIME. For FREE, with its crossings of FWD, HERE, and QUOTIENT, it wasn’t hard to infer the missing R. TIME was a bit more difficult, I think because of 42d [“Hearing aid?”] PA SYSTEM, but still not terrible.

Other parts of the fill I enjoyed included 66a [“Danish word for a feeling of quiet comfort”] HYGGE, 22a [“Pig’s squeal”] OINK (it’s just such a fun word!), and 19d [“Ump’s reasoning for a safe call”] NO TAG (because baseball). Overall, a fun way to start the day!

Editor: Amanda Rafkin
Theme: The letters “mic” appear in each of the vertical theme answers, moving further down and to the right each time. 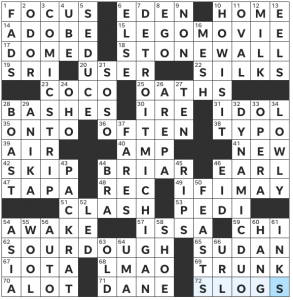 Great puzzle today by Team Fiend member malaika! All of the theme answers were exciting, particularly (and aptly) DYNAMIC DUO. The black square pattern is interesting – it made the middle feel a little choppy at times, but I love all the longer answers in the corner that the shape allowed. LEGO MOVIE, STONEWALL, SOURDOUGH, PACKRAT, HOW IS IT are all fabulous.

I’ve been working on a puzzle with longer stacked non-thematic answers like LEGO MOVIE and STONEWALL are here, and it’s rough to get clean crosses with exciting answers! That’s why I don’t mind the asymmetry in the bottom left – when optimizing for newer solvers, clean fill takes precedence for many constructors.

Busy work day today so gotta run! May all your crosswords be TYPO-less! 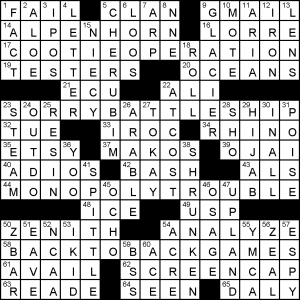 Today’s puzzle is by Stella Zawistowski. It features popular American board games enjambed to make wacky phrases. All three are spanning entries, with BACKTOBACKGAMES as the very apt revealing entry. I think I have only seen IRL two of those games, OPERATION and MONOPOLY, here, and encountered battleship solely as a pencil-and-paper exercise; I’m not sure why a purchased board is needed, but I suppose it’s prettier? That said, I know of all of the games from crossword immersion, possibly even from similar themes, as this is a popular theme!

There were a couple of crossword-ese deep cuts today:

This appears to be a debut for Sean! A solo one at that… not a “joint effort”!

THEME: Phrases with joints in them. The ones on the body. But this would’ve been great to run yesterday on 4/20 just for the title pun :) 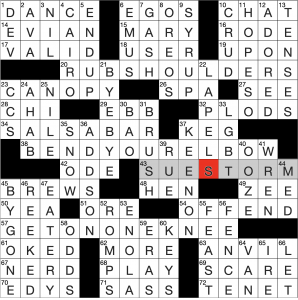 What I admire most about this grid- especially as a debut- is Sean’s inclusion of three theme answers (rather than trying to cram in more). That leaves the grid room to breathe and led to a joyful experience during the solve. The theme itself doesn’t beg for much figuring out of wordplay- it is what it is, and makes for a featured part of a rather languid ride.

That being said… When I think [Schmooze] the first phrase that comes to mind is RUB ELBOWS WITH… not the correct RUB SHOULDERS… which I’m sure I’ve heard. But I’ve heard about RUBbing ELBOWS waaaaay more.

And I’ve heard of TWISTING AN ARM to get someone to have another drink, not necessarily BENDing YOUR ELBOW… but I guess that accurately describes what the body is doing when one enjoys a sip. I am thankful that the dreaded pronoun ONE’S was avoided. I almost thought it was there for GET ON ONE KNEE but that turned out to be referring to the number “ONE.” Phew!

Thanks, Sean! Solid grid today! And, of course, congrats on the debut.