A fun offering from Ada and the Inkubator team! 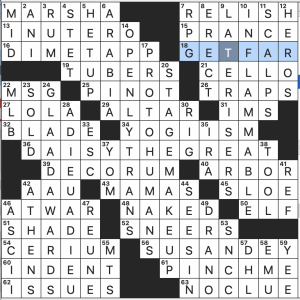 What I didn’t know before I did this puzzle: that there was an international furor in 2020 over the pronunciation of EMU in an NPR story.  Click the link. You won’t regret it. 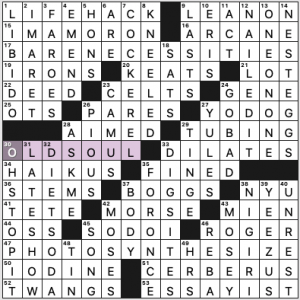 NO CAL is the revealer today (39a, [Diet-friendly … like 20-Across, 51-Across, 4-Down and 40-Down, as per the starred clues’ answers?]). The main theme answers are all food items that feature the letters CAL. Yet those letters are not used in the crossing entries as clued (though the resultant unclued words do make valid crossword entries). 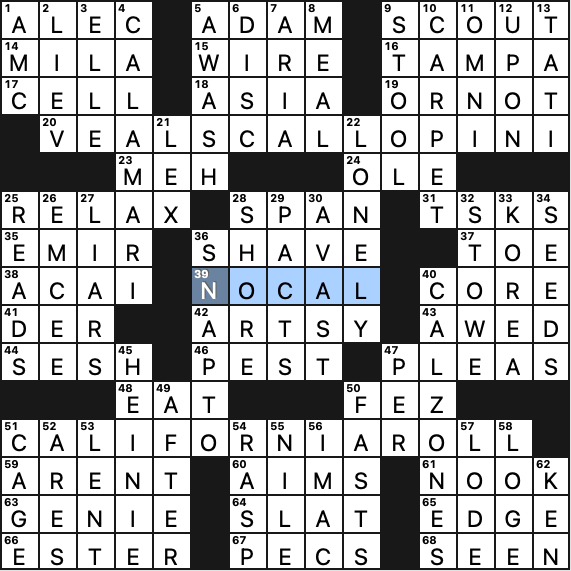 I enjoyed sussing this out right from the get-go at 1a. It didn’t take too long to realize the starred-clues’ answers were one letter shy of the number of squares in the grid and that the letters CAL weren’t being used by the crossers. Hitting on the revealer made it all make sense.

But I still needed an aha moment to realize all the main theme entries were foods. That added an elegant touch to the theme.

Although I have to say conceptually, wouldn’t it make more sense if it was the food items themselves that were dropping the CALories? Not sure how that would work in a grid, but that’s what my brain wanted.

Fill-wise, with the themers in a pinwheel pattern and the star-clued answers putting additional constraints on the grid, there’s a dearth of long non-theme entries. HEINIE is about as colorful as it gets. On the other hand, there’s nothing to scowl about either, so I’m not complaining.

Clue of note: 41a. [The, in German]. DER. Only if the subsequent noun is masculine. Otherwise, use die for feminine nouns and das for neuter nouns. 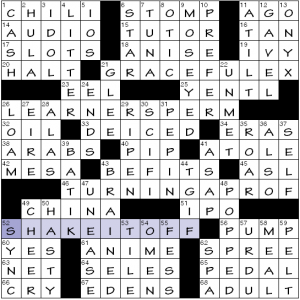 This is my first interaction with a Patti Varol-edited LAT crossword, and I feel certain that I can detect a different vibe. Among other things, there seems to be a little more playfulness throughout.

Nothing too special about the theme—it’s fine and mildly entertaining. Where the crossword really shines is in the liveliness of the ballast fill and cluing there.

So that’s it. No fireworks. A decent theme and a smooth solving experience.

Theme: Each theme answer begins with a synonym for “new.” 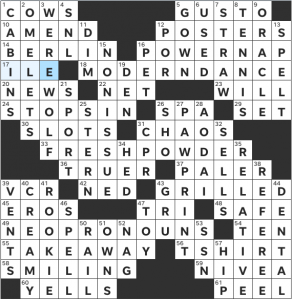 I super thought that FRESH POWDER was going to be my favorite theme answer, but I think that NEOPRONOUNS beat it out. I love these as a group because they are just such a fun, FRESH, MODERN set. I also think that these each worked really well with their crosses, so that folks less familiar with NEOPRONOUNS or Hemsley Winfield (like me) can complete their fill.

Grid-wise, this is such a beautiful, whirling structure. It’s always interesting to see puzzles, which usually have that tripartite set of sections, that bend that structure in different ways. The middle section here feels more like a liminal space as you move through clues, filling in STOPS IN – SPA – SET and then SLOTS – CHAOS before hitting the middle themer and proceeding to the inverse 5-5 and then 3-3-7 lettered lines. Structuring the grid like this also let to some really great longer words like OMELETS, WEREWOLF, RELATIVE, and REFEREE. 27d [“A single one on a snowy doorstep might represent a cat going ‘…nope’”] PAWPRINT is hands-down the best clue in the puzzle, though 16a [Productivity-boosting doze”] POWER NAP is a close second.

Some other Friday faves include

The big TAKEAWAY from this puzzle, I think, is that using black squares creatively like this opens up a lot of possibilities for the fill in the puzzle. Have a great rest of your day! 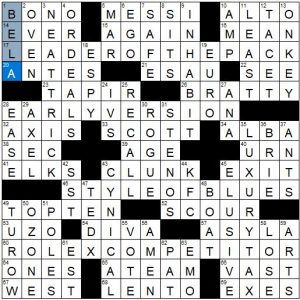 Theme entries are clued with a single letter, which should be read as the Greek letter that uses that symbol.

This was a delightful solving journey for an easier themed solve, in that I wasn’t quite sure what was up with the first themer, then it sank in with EARLY VERSION with [b] / “beta.”

I like the theme set and the approach — I’m having trouble finding words to describe this type of clue-driven theme conceit, but I feel I haven’t seen it in a bit. I do always grimace when I see “alpha” or any other Greek letter used in this way — alpha (or beta or omega) wolves don’t actually exist in wild packs, and the use of such hierarchies to describe human people and their social status is cringeworthy and reductive, and I’ll hold my tongue beyond that. But certainly it’s in the language and good fodder for a theme like this.

Oher highlights for me were mainly in the clues, which nicely spice up a gentle enough grid – see the added bits of info in clues for ALBA, LENTO, and BELA Fleck, who often is clued just to the banjo or his eponymous group, but today gets his other band in [1d New Grass Revival banjo player Fleck].