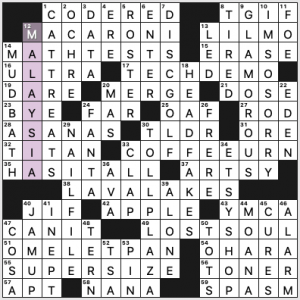 So many 7s, 8s, and 9s in this grid! And I just now noticed that the grid uses diagonal mirror symmetry across the NW-to-SE axis, so that one corner of 5s isn’t echoed by another. When there’s no theme to piece together, it’s easy to be subsumed in solving and not see the diagram.

Fave fill: CODE RED (“You’re goddamn right I ordered the code red!”), MATH TESTS, TECH DEMO, LAVA LAKES, LOST SOUL, MUD BATH, MALAYSIA, CAT TREATS, DISC GOLF, HEAD FAKES, and an ETSY SHOP (note: Many Etsy creators are on strike for the month of April, because Etsy is yet again increasing the percentage it takes out of the artisans’ sales—an especially tough burden for sellers who are disabled, LGBQ+, and/or immunocompromised).

A-a-and my husband just got home after days away, so I’m sorry to dart off without talking about the clues that popped out at me. 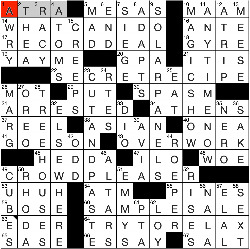 Who doesn’t love a Robyn themeless? As you’d expect, this one has some pretty delightful how-does-she-do-it cluing:

Other entries I enjoyed: SAMPLE SALE (having recently helped my niece find her wedding gown at a sample sale, can vouch that they are great!), CROWD PLEASER, TRY TO RELAX, ANY TIME NOW. Uncharacteristically for Robyn, there are a decent number of lowlights in the fill: ATRIP, ILO, SASE, EDER, Ed MEESE, and THEA Astley, Googled with quotation marks, gets fewer than 100K Google hits. (I’d have gone with THEA Kronborg from Willa Cather’s The Song of the Lark.) Annemarie ROEPER gets fewer than 10K!

So: Not perfect, but a lot to love here. 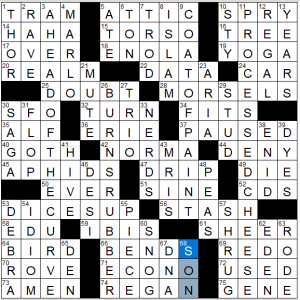 Nice theme set, and I always enjoy when a theme requires running the entries down. Tough for me to gin up discussion of high-word count puzzles otherwise, so let’s go right to notes: 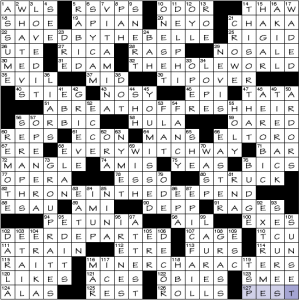 Punny references to characters and events featured in Disney films.

These are fine; perhaps a rib or two was tickled. I’ve never been a big Disney fan so there wasn’t a ton of nostalgic resonance for me, but perhaps other solvers will have a different experience. And with the current political flapdoodle, who knows? 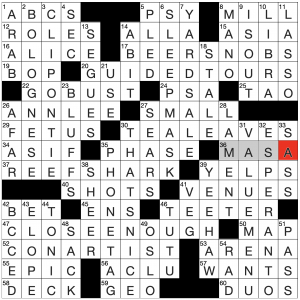 Not the smoothest solve for me today. Disjointed and never felt like I was sailing through. Can’t put a finger on where/why exactly I stumbled. But it was often.

Least favorite stuff: IS OUT, A BIT, ALLA (I always spell Penne Ala Vodka with one L…). But that’s it. Not much to LAMENT about! 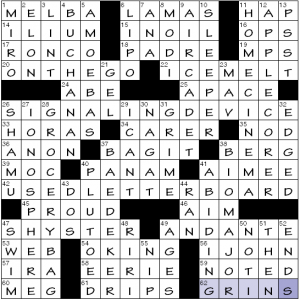 This one well and truly kicked my butt, the ‘Les Ruff’ appellation notwithstanding.

It was difficult at all stages, from getting toeholds, to expanding—pseudopod-like (5d [Slide show subjects] AMOEBAS)—from one section to another, to knitting together the whole, and even in completing the final section (52d [Cuts off] ENDS).

The final section for me, by the way was the top center. All during the solve I was considering IMAMS or POPES for 6a [Certain spiritual leaders], which eventually was revealed to be LAMAS. The allied entry at 18-across [Certain spiritual leader] had me at a loss in finding a five-letter answer besides RABBI, which I’d established didn’t work. Turned out to be PADRE. Other impediments: 9d [British teen into flying], which I’d pegged my hopes on being PETER PAN emerged as –––CADET, but I had no idea if those three letters would be RAF or AIR, and they were crucial to completing that problematic block. As for 10-down, [Berth place], I was long considering a nautical answer (SEA PIER?) before accruing enough letters to realize the subject was trains (SLEEPER). Just tough all over there.

Let’s look at the two grid-spanning entries, which are simpatico: 26a [What’s made for “Jeopardy!” contestants] and 42a [What’s made for “Wheel” contestants]. For both, I was able to get the first parts relatively easily, SIGNAL, then SIGNALING for the former, and USED LETTER for the latter. Let me interject that I’d already encountered 62a [Signs of satisfaction] without getting the answer (GRINS), so I was a bit leery of SIGNALING in 26-across. For that entry’s completing DEVICE, I auditioned BUZZER and perhaps something else that I can’t recall at the moment. And for 42a, I rather confidently had it as LISTS before struggling with crossings gave me BOARD.