We’ve got an in-house puzzle this week at the NYT, as their resident digital puzzles editor brings us a puzzle that’s been invaded by a bunch of aliens, it seems: 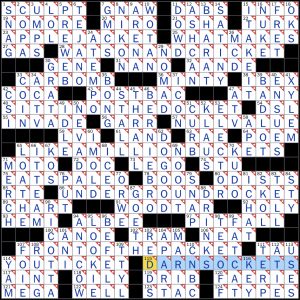 – 23A: APPLE JACKET [Bit of company swag for a Genius Bar staffer?]
– 25A / 114A: WHAT MAKES YOU TICKET [With 114-Across, exasperated question to parking enforcement?]
– 28A: WATSON AND CRICKET [Elements of a Sherlock Holmes sports mystery?]
– 48A: SITTIN ON THE DOCKET [Today’s plans: watchin’ someone’s kids?]
– 65A: LIKE A MILLION BUCKETS [How much Michael Jordan or Wilt Chamberlain could score, hyperbolically?]
– 86A: UNDERGROUND ROCKET [Missile silo’s holding?]
– 107A: FRONT OF THE PACKET [Where Sweet’N Low displays its logo?]
– 115A: DARN SOCKETS [Cry following an electrical malfunction?]

Each of the (long!) theme entries has an extra ET at the end, transforming it into a new phrase that’s been funnily clued. What really impressed me about this puzzle was (a) how long so many of the themers were and (b) how stacked they were right on top of each other – that’s super tough to pull off as cleanly as he does here! Some things I’m less excited about are (a) that many of the base phrases with out the extra -ET aren’t as interesting to begin with (underground rock?) and (b) that LIKE A MILLION BUCKETS and DARN SOCKETS inserts the ET before a final S rather than at the end of the base phrase like in all the other themers. This felt inelegant and inconsistent in a way that was surprising to me. Even still, a largely clean and smooth Sunday puzzle, which is a feat in itself!

One major note: 33A: CAR BOMB [Irish ___, popular St. Patrick’s Day cocktail] Oof! It’s just brutal to include this. Per its Wikipedia entry, “The name is considered offensive by most Irish and British people, with many bartenders refusing to serve it.” As I seem to ask each week that I review the Sunday NYT puzzle, how does stuff like this make it through the editing process?

Other random thoughts:
– 92A: HOLY [Guacamole go-wish?] – Ok, now this made me smile.
– 70D: KUDO [Ounce of praise, jocularly] – I don’t know that I’ve ever seen this as the singular version instead of kudos. Mind blown!

What did you think about the puzzle? Let us know in the comments section below… and have a great rest of your weekend!

Theme: Each theme answer includes the word BALM as the “comfort in” between two words. 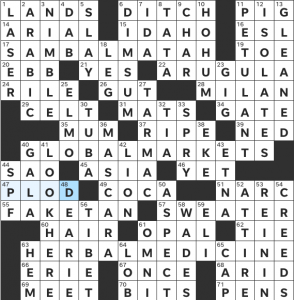 I was unfamiliar with SAMBAL MATAH before today’s puzzle, so I caught this one on the crosses. Learning more about it, I definitely will not forget because it looks very tasty. GLOBAL MARKETS and HERBAL MEDICINE are both nice theme-wise; the latter, in particular, felt very apt considering the theme. I often think of HERBAL MEDICINE as something that will hopefully be a balm to whatever injury/bruise I’ve gotten myself.

This grid is definitely asymmetric, and there is so much great stuff in here. Something I’ve come to really appreciate about having an asymmetric grid is having a specific structural element of the puzzle that’s my favorite. Think about it, right? A symmetric grid is, obviously, going to have similar elements throughout, and it can also be restricting. Don’t get me wrong: there’s also a beauty symmetry, but, in this puzzle for instance, I really loved the upper right corner. I loved PETULANT, ISOLATES, and GLEANED all going down, as well as the reference to 11a [“Potbellied pet”] PIGs and 39a [“Jacob Batalon’s MCU role”] NED.

This puzzle was anything but HO HUM, though it was indeed something I could find comfort in. TATA for now!

This week, Evan is on vacation and running a puzzle from the archive. Here is Jenni’s original write-up from when it was originally run in 2016. I will add some brief updates from my POV later this afternoon.

Last week I was in New Haven. This week I am in Ocean City, NJ, for a family beach vacation – part of our daughter’s 16th birthday present. Emma and her friends got up this morning to see the sunrise, ate breakfast and then went running on the boardwalk. Meanwhile, Mom is sipping orange juice on the balcony in the cool peace of a Sunday morning and solving crossword puzzles. We each take our vacation as we’d like.

This week’s offering from Evan gives us phrases that end in the worm “time” and takes them literally. It’s not much of a trial. This is not a criticism; it’s a lovely, smooth, and satisfying puzzle. Evan tells me there’s a “small meta-like Easter egg” hidden in one of the clues. Perhaps it’s vacation brain, but I don’t see it. Anyone? Bueller? On to the theme:

I figured out the theme fairly early (TRACK MEET) but the answers weren’t entirely obvious, and it was satisfying to figure them out. A nice start to a vacation Sunday.

Time to make my breakfast and search out bike rentals for the girls. I hope your summer Sunday is as lovely as ours.

What I didn’t know before I did this puzzle: that the Chicago Bulls’ MASCOT was named Benny.

Time warp back to 2022! Sorry for the late edition addition.

My time was right around Jenni’s original at 12:12, yet I found the puzzle quite difficult in spots! Classic wordplay, but very well done. I remember solving this theme when it was first published. I liked it then. I like it now.

Here is the updated Grid and changes (courtesy of Evan):

Theme: Familiar phrases hide one-named singers within. The revealer is CROSSOVER ARTIST (121a, [Genre-spanning performer, or a theme hint]). The artists “cross over” multiple words in each theme answer. 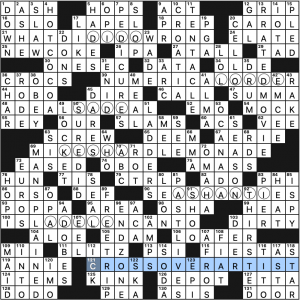 Lovely. Fun phrases and some wonderful finds, especially the last three. I thoroughly enjoyed this theme.

I’m not sure it needs the revealer though; the title and the circled letters make it clear enough what’s going on. I was hoping for another theme entry. It feels like Cher and Madonna are noticeably absent as popular as they are, but maybe suitable entries of the right lengths couldn’t be found.

Also, I have to say I find it interesting our constructors chose to go with an all-women line-up. I’m not complaining, because I like the consistency, and these are all fun choices. But there are a number of dudes who are also potential theme entries (Elvis, Bono, Seal). Maybe the constructors are working on that puzzle already.

An enjoyable grid all around, and a debut for two new constructors. Congrats on a good one! Four stars.

Themeless 15x today. Wasn’t expecting that! I wonder why it’s called Themeless Sunday 1 instead of Universal Freestyle 18. Universal Sunday 15x seems to be the red-headed stepchild. Very difficult to find anywhere online. And I have noticed that it’s usually not my favorite one. I mean, this themeless is fine. Entries like: 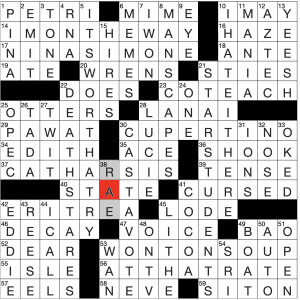 NINA SIMONE, DEATH STARES (okay, that’s kind of an awkward plural), IT’S WORTH A TRY!, and WONTON SOUP were my favorites.

Some of the other longer answers weren’t my cup of tea: CUPERTINO (needed every cross), CO-TEACH as clued (I don’t think of co-teaching as “sharing a course”- my instinct says that that clue would point more to the students. However, if you argued with me about that, you would win). AT THAT RATE feels like it should be AT THIS RATE.

Lots of names too! And I entries: I CALL, I WON, I MAY, I HATE IT HERE (is that a common stand alone phrase?).

Favorite mistake was ELI for [Mistake hidden in “Israeli”]. The correct answer was RAE. That said, it’s a lot less common of a name I think than ELI, and I see no good connection between the name RAE and “Israeli”s).

So all in all, not my favorite of the Universal Themeless series so far. And the curiosity stands as to why it’s not in with that group… like it’s sitting all alone at a lunch table enviously watching all the other Universal Freeestyles yuk it up together.