This month, we are asked, What four-letter word is hinted at by this puzzle? I spotted the themers/theme right away: each long horizontal entry contained a US vice president: 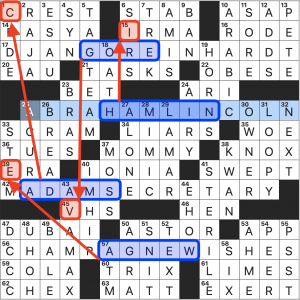 The mapped grid squares spell VICE, our contest solution. A surgical meta by Peter, mapping perfectly to the title, with a 100% click. It may be a well-known trivia factoid to others, but I was today years old when I learned that ABRAHAM LINCOLN contains his own vice president as a substring, which is pretty neat.

We’ll end with a live version of Tina Turner’s Better Be Good to Me, which was featured on the Miami Vice Soundtrack.