Theme:  FOOD FIGHT – each theme answer is a food related person/character with a militaristic name. 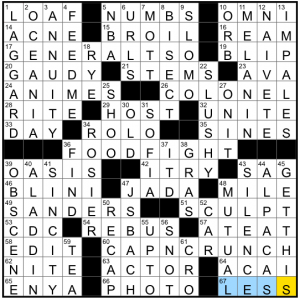 Congratulations to Li on his NYT debut! This is a pretty cute theme. It’s interesting that these three people are food-connected in different ways, General Tso being a namesake, Colonel Sanders being a founder/”face”, and Capn’ Crunch being a mascot/name of the cereal.  These folks are also all incredibly well known (at least if you’ve seen the ubiquitous crossword clues for TSO), which meant they were all immediate drop-ins for me – the most difficulty I had with the theme was remembering how to spell COLONEL. I don’t *love* that CAPN CRUNCH‘s name is abbreviated like that in a thematic sense, but hey, that’s his name, it works phonetically, and the puzzle is better with him in it. I’m not mad.

The central answer of FOOD FIGHT is 9 letters, which forces the three black squares on either side of it, which in turn forces the puzzle to be broken up vertically into groups of 7 letter answers. These are hard to work with since it’s difficult to come up with exciting 7 letter answers that stack together (looking at you, ANNUITY), but this puzzle does it beautifully, especially in the bottom two corners (OBSCENE/ALADDIN/SIN CITY and SILENCE/ALPACAS/GET THIS). This design did make the grid feel a little sectioned off though, both between top and bottom generally as well as in the NW and SE corners specifically. That’s a pretty constructor-y viewpoint from me, though, and it didn’t negatively affect my experience as a solver.

Who are you betting on in the General vs Colonel vs Capn’ battle royale? Sound off in the comments!

Huh. Stephanie Spadaccini is a long-time constructor, but her name doesn’t appear in the Fiend database. That’s because her last newspaper-published puzzle was a NYT grid back in 1999. She’s also a former managing editor at GAMES Magazine and has written several puzzle books under the title Uncle John’s Bathroom Reader. According to her bio on Amazon, she’s a regular constructor of the People Magazine and AARP Magazine puzzles. And here she is today making her WSJ debut.

The theme involves familiar phrases whose first words are verbs but can also be articles of clothing. 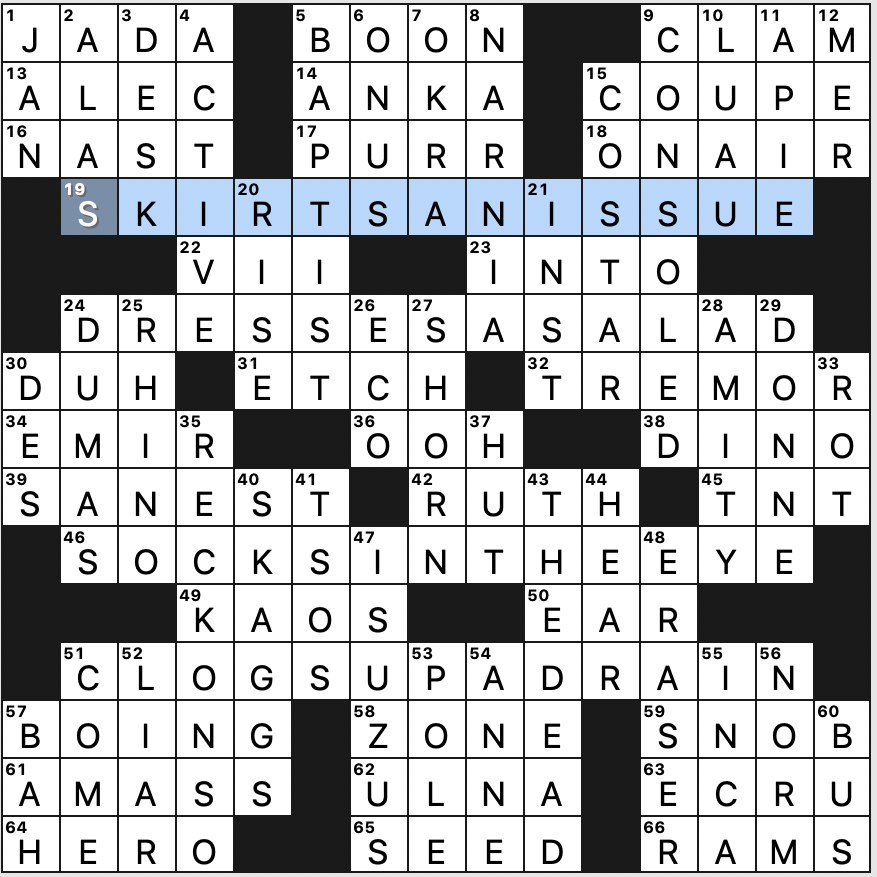 I have to admit I wasn’t too keen on the theme at first. The entries sounded odd in the present tense and with indefinite articles (well, for three of them). But the theme is consistent and somehow I’m getting a fun Amelia Bedelia vibe from it.

The grid is heavy on the blocks and cheater squares, but still clocks in at 74 words, lower than the generally-accepted maximum of 78 words. But it does mean there’s nothing longer than eight letters to be found outside the theme. Still, “RECKON SO” is a pretty fun entry. 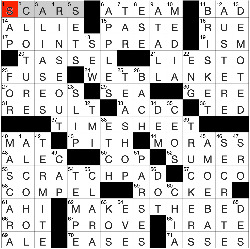 A true Queen of Monday is back this week with a theme that’s more than it seems on first glance. The revealer at 60A [Does a daily chore using the elements at the ends of the answers to the starred clues] is MAKES THE BED. That is, the last word of each theme phrase is an item that goes on your bed when you’re making it:

Why is this more than meets the eye? Look at the order of the themers: From top to bottom, they are in the order of which these layers would actually appear if you’re making the bed, with SPREAD on top, a BLANKET over your SHEET, and a PAD on the bottom. That’s craftsmanship right there!

I thought CLOTURE at 2D was tough but fair for a Monday, and otherwise the fill is easy-breezy. I do not usually do star ratings — I hate judging other constructors in that way — but this one I can give a solid 5 to! 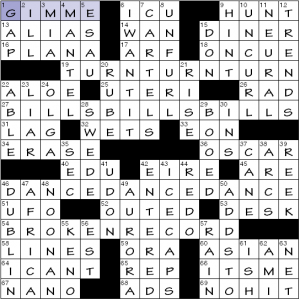 I’m pretty sure that 1-across ([Very easy crossword clue] GIMME) is an Easter egg of sorts, given its prominent location. Though it wasn’t a hit (69a [Like a perfectly pitched inning] NO HIT) in the US, ABBA’s “Gimme! Gimme! Gimme!” is a fairly well-known song from a band with a penchant for such repetitive titles.  It’s crossed by 3d [“Mamma __!”] MIA, an even more famous song of theirs. 9a [Easter egg event] HUNT.

Not much to highlight in the ballast fill—it’s just there and doing its job. 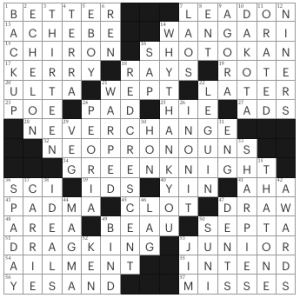 The puzzle wasn’t all that hard for a “hardest of the week” slot, but I did have a careless typo (MOSSES for MISSES, absolutely meant to enter crossing SUNI) that cost me maybe 45 seconds.

Brooke’s pinwheel grid spins fairly chunky corners around an unusual core where three 11s cross two 11s and a 3/3/3 split instead of having another 11 in place of SAP HON LAG. The reward is entries like “NEVER CHANGE,” NEO-PRONOUNS, RED CRESCENT, and “WHY, THANK YOU.” Other fave fill: WANGARI Maathai, DRAG KING, PEORIA clued as a tribe rather than the Illinois city named after the people, Ursula K. LE GUIN, and SHARPIES.

Other welcome bits are the ones that hint that this puzzle isn’t edited by an older, straight man. We’ve got a menstrual PAD and the retailer ULTA clued as a [Sephora competitor]. 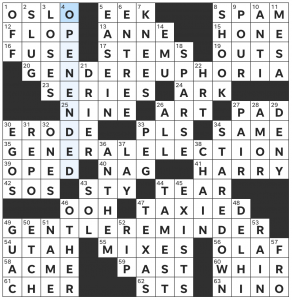 Good morning, friends! This puzzle had three answers that begin with the letters G, E, N. I have never heard of GENDER EUPHORIA, but I had heard of “gender dysphoria” so it sounded right. GENERAL ELECTION and GENTLE REMINDER were our other two first gen answers. Onwards to the bullet points! 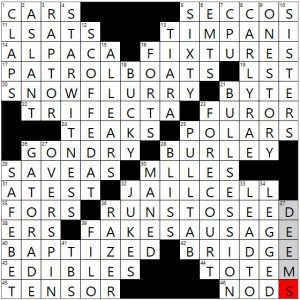 Manageable-to-smooth solve on the top half, then very slow going in the bottom. Right to notes, because I’m late: