This week we’re looking for a noted American car of the past or present. The grid contained seven cars, each named after a U.S. city:

I anticipated an easy meta, much like Mike’s previous meta titled “Dude, Where’s My Car?”. [Narrator voice: it wasn’t easy]. The next step was straightforward: map each city to its state.

My first thought was mapping the two-letter state acronyms back to the grid. Arizona (AZ) was there (HAZA), but New Mexico (NM) was not. And then… I got stuck. I spent a day and a half chipping away, exploring rabbit holes, and circling back. My spidey sense was tingling. I knew that I had the right idea: I just had to nail it down.

I set a land speed record for rabbit holes before locking in on the signal: 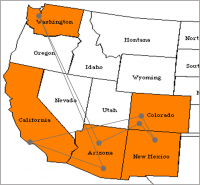 One of many rabbit holes I chased

I woke up the next morning, and decided that two-letter state abbreviations had to be part of the mechanism (HAZA could not be a coincidence). They were all in there, but not in order. That’s the thing about solving metas: I often invent imaginary rules that don’t actually exist. Such as: the state abbreviation NM has to be in order. It doesn’t: the mechanism simply needs to be unambiguous. I noticed that HAZA had both AZ (for Arizona) and H (for Hyundai), leaving an A, and I had the rabbit: each state abbreviation plus the first letter of each carmaker mapped to a four-letter grid entry, leaving an extra letter: 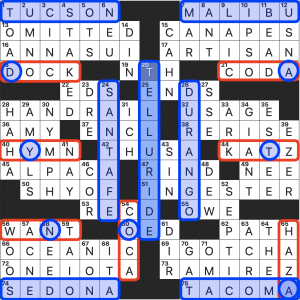 The leftover letter in each mapped entry spells DAYONA, leading to Dodge DAYTONA, our contest solution. This is my kind of difficult meta, with the right amount of give-and take that rewarded dogged persistence.

There were some good-natured comments on the muggles board claiming that this meta was inelegant, and I disagreed a couple of times. A good meta is fair, with no unintentional ambiguity, and provides a solid click on the answer. This meta has all of that, and more.

I know the answer, but I haven’t fully solved yet

You can solve some metas without understanding the full mechanism. That was true this week. My meta solving notes are on the right. I saw AODYATN, knew that anagrammed to DAYTONA (which was on my short list for a hail Mary guess), and had the answer.

But… I hadn’t decoded the full mechanism. Mapping the leftover letters back to the grid (as shown above on the left) spelled DAYTNOA in grid order (close, but not quite there yet). Then I listed the full mapped entries in grid order (shown above to the right of the completed grid), and the solution became a 100% lock with zero ambiguity.

Speaking of Muggles: a few solving pals reached out for a nudge, and Lincoln Town Car was their most common proposed solution. Lincoln is 7 letters and “Town” fits the theme. That’s a solid potential answer (based on inference), but there’s no mechanism supporting it. The actual answer was a lock. Solvers: please let me know how you made out on this meta: how many rabbits did you chase? What was your proposed (or actual) hail Mary guess? Share your thoughts in the comments.