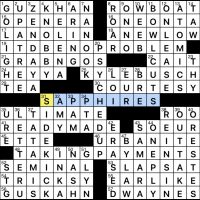 We have a themeless this week! The thing that pops out right away is the neat symmetry of GUZ KHAN [British comedian who plays Ivan on “Our Flag Means Death”] at 1-Across and GUS KAHN [Lyricist who wrote “Ain’t We Got Fun?” and “Makin’ Whoopee”] at 56-Across. That being said, I didn’t know either of these answers and needed every single cross and a couple guesses to fill them in. I took twice as long as normal to complete this grid, partly due to the above names and the rest due to figuring out Kyle Kusch was actually KYLE BUSCH and KRE-Z was really rapper and actress BRE-Z. Several other names gave me trouble, like CAIT O’Riordan, Midge URE, and SAMARA Weaving. DWAYNES, on the other hand, came easily to me, from knowing that Wade’s first name was spelled Dwyane. 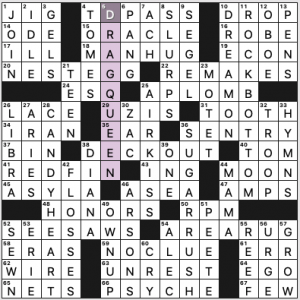 Love the theme! The revealer is ROCK BOTTOM, clued 11d. [All-time low … or a musical hint to the answers to this puzzle’s starred clues]. The second word of each Down themer (the “bottom”) is the name of a rock band:

All four rock bands had their heydays in the 1970s and 1980s, but this is not a complaint from me. That was my heyday for listening to Top 40 radio! The theme phrases are all colorful and tons of fun.

This is a nice construction with a straightforward Tuesday- appropriate theme. The fill felt a little more challenging than I’d expect for a Tuesday, but we’ve already established that I’m not a great barometer of such things, so please speak up!

Each theme answer ends in the same sound. 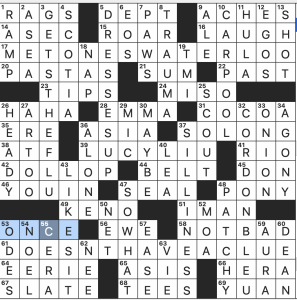 I like the placement of the theme entries – I enjoy grids with theme entries going both across and down. I also like the two 15s. All the answers are solidly in the language and the theme is consistent. Nice! 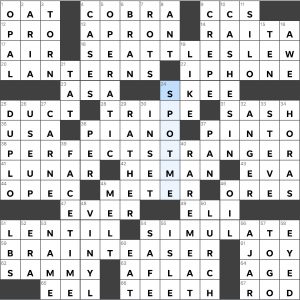 Theme: the first word of each themer appending with the word STORM forms a new phrase

Solid theme with a delightful themers, though I needing several crossings to complete them. Not knowing my horse champions well enough, I had a few in mind instead for SEATTLESLEW though with the theme we get SEATTLESTORM, the WNBA team from their namesake city. The second half of PERFECTSTRANGER was easy fill for me but I kept thinking “total” or “complete”, which was a PERFECTSTORM indeed. BRAINTEASER should have been quicker to get since it’s a great clue but just didn’t click this morning before enough coffee, which can also be crucial for a fruitful BRAINSTORM.

Stumpers: LURCH (needed crossings), VINYL (spelling tripped me up today), and OPERATIC (thought there was a second word instead of it actually being an ending)

Started off very strong for me, to the point where I thought I might have a p.r. today but alas that wasn’t the case as my speed slowed down in the middle and never quite picked back up. Still a very enjoyable solve!

Theme: This puzzle RINGS / A BELL (38a, [With 41-Across, seems familiar, and a hint to the final syllables of the starred answers]). The other theme answers end in syllables that sound like a bell ringing. 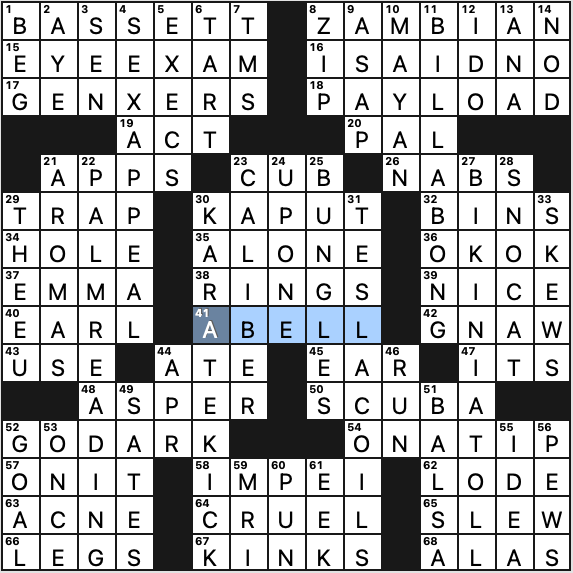 Two of these are onomatopoeic (bong and ding) while the other two are just words that we use for the sound of a bell. It would have been more fun if they were all onomatopoeic, but at least there’s some balance there. Very nice choices, as well.

I admit I stayed in the dark as far the theme goes because I solved the grid completely in counter-clockwise fashion, finishing in the middle. So I had a nice aha moment right at the end.

Note also that the grid has left-right symmetry and the black squares are roughly in the shape of a bell—to even include a clapper, the upside-down-T shape in the bottom center of the grid. Fun grid design.

The fill is pleasantly smooth as well. Those upper 7-letter stacks are quite nice, but even better are the two long Down entries starting from within the bell: KARATE KICK and TESLA COILS. Plus CALIBER, BUNGLES, GO DARK, and KAPUT. Lovely stuff.

This is a one star puzzle. Literally.

THEME: Dishes are reimagined as if they are being critiqued (rather harshly). 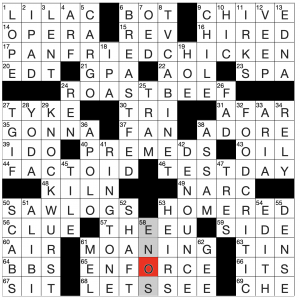 I love themes that cannot be (or are not easily) replicated. This would be one of those. I can’t imagine there are many more (if any?) entries that could fit this idea. The grid utilizes Left/Right symmetry, possibly because it was tough to find many more dishes that would allow for rotational symmetry. If I’m being honest, I was a tad bummed when I uncovered FOOD CRITIC because I was so hoping for a fourth themer rather than an unnecessary revealer, but it’s entirely understandable. And hey! I’m glad something relevant would symmetrically fit at all!

Other good stuff included SAW LOGS, and the fun FACTOID that “Millicent” is Barbie’s middle name. I wonder how EDITH’s crEDIT History is according to Credit Karma… ENOS Mireille is new to me. Just googled her… I have the names backwards. It’s Mireille ENOS.

Love this one! The theme might be about 1 star dishes, but it’s a 5 Star puzzle. 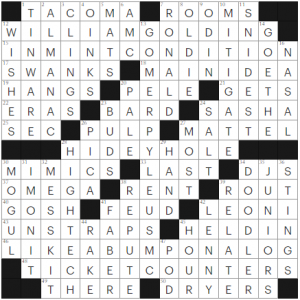 This is billed as the publication’s second-most challenging puzzle of the week, but it took me significantly longer to solve than yesterday’s, purportedly the hardest. I’d say over two minutes longer!

And now the customary swing through the grid.

A solid workout. Any proper noun or bit of obscuriana unknown to me was fairly crossed, so this tough crossword was eminently solvable.

Looking for a hook to hang some closing music on and I haven’t thought of much, so will build off of the GOMER in 11-down for Wes MontGOMERy. 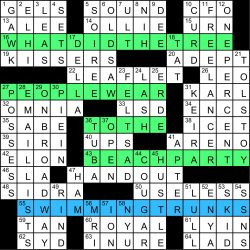 Good day, everybody! We’re back to early spring weather and some cooler air out here in the East, and hoping that things feel more springlike where you are.

Speaking of spring, the month of April is when we have both Earth Day and Arbor Day, and this Friday will mark the 150th anniversary of Arbor Day. With that, we have the inspiration of our theme, which can give you a little laugh as you go out and help plant a tree later in the week.

There’s a puzzle dedicated to the environment and, in it, there’s a leaf…well, sort of…with the LEAFLET entry (22A: [Brochure]). We have a stack of vertical 10s in the Northeast and Southwest, plus an adjoining 7-letter entry, and can’t help but have an (awesome) earworm develop when entering in ON BROADWAY (29D: [George Benson hit about a famed Manhattan street]). There’s music for almost everyone’s tastes in the grid, from SYD (62A: [Pink Floyd co-founder Barrett]) to ENYA (52D: [One-named “May It Be” singer]) to the Eagles mentioned in the clue for LYIN (61A: [“___ Eyes” (Eagles hit single)]). How long before we see clues mentioning Twitter’s takeover for entries like ELON, which, again, would be so much cooler if mentioning the North Carolina university whose nickname used to be the Fighting Christians (42A: [Billionaire Musk]).

“Sports will make you smarter” moment of the day: HAM (47D: [Glazed Easter entree]) – One of the most memorable moments I’ve ever had watching the NCAA Tournament was 22 years ago, when Texas Tech University’s Darvin Ham shattered the backboard while dunking a basketball in a game against one of the blue bloods of the sport, the University of North Carolina. Texas Tech had only lost one game all season going into the game, but a lot of people questioned how good the Red Raiders were, and this game against the Tar Heels was supposed to be the barometer. Well, Ham broke the barometer, the backboard and UNC’s spirit with this play, on Texas Tech’s way to a win. Ham would go on to have a lengthy career in the NBA, win an NBA championship with the 2004 Detroit Pistons, and is currently the top assistant on the Milwaukee Bucks coaching staff. (The Bucks are the defending NBA champions.) Enjoy the video, and the low-key awesome one-liner from famed tennis commentator Ted Robinson…