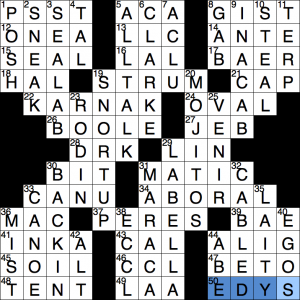 hello and welcome to episode #725 of matt gaffney’s weekly crossword contest, “Black Is the New Black”. for this week 4 puzzle, the instructions tell us that the contest answer is a piece of sports equipment. what are the theme answers? there don’t appear to be any overtly marked, and there are no answers longer than 7 letters in this smallish (13×13) grid.

there is a plethora of somewhat iffy fill, like INKA, CAN U, ECCL, and the unlovely 3×3 clusters at top-middle and bottom-middle (ACA/LLC/LAL and CAL/CCL/LAA). i’ve never seen the word {Away from the mouth} ABORAL before, although it was not difficult for me to guess from its latin roots AB + ORAL; the crossing with the also-unknown-to-me {Titian portrait} LA BELLA might trip up somebody. so all of this hinted to me that maybe the whole grid is thematic somehow.

what about the title? certainly it suggests doing something with the black squares, of which there are quite a few more than you would expect for a grid so small. INKA is black-adjacent, but not in a way i could do anything with. eyeing the grid once again, though, it jumped out at me that there are big clusters of the letters B, L, A, C, and K. maybe we are supposed to color those squares black? 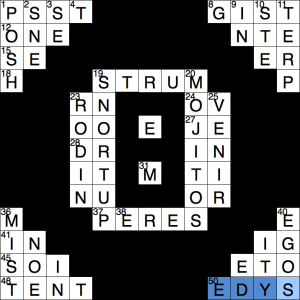 why yes, we certainly are. that’s quite a precise picture of an 8-ball, which is both a piece of sporting equipment and also itself defined by being black.

this is maybe the third or fourth (out of 725) mgwcc metas based on coloring in certain letters of the grid, and i believe it’s the first one i’ve actually figured out. (my success rate on all other types of metas combined is quite a bit higher.) i don’t know if it’s because i’ve finally learned to look for this type of meta, or because it was more clearly suggested this week by some combination of the title, instructions, and lack of any other leads in the grid and clues. but it really felt to me like there was nothing else to look at, so i tried it and it worked.

all in all, not the toughest week 4 meta—a fact for which i was quite grateful, as i didn’t really have a chance to look at this until tuesday morning since i was traveling last week. unlike some recent late-month metas, there’s only a single aha here rather than a succession of them. nevertheless, it was quite satisfying, and the resulting picture is so accurate that the answer practically jumps off the page (or screen).

in matt’s blog post for this week’s puzzle he mentions solver feedback from last week asking whether his middle initial was A. his response was no, it’s C, as revealed back in mgwcc #006; there we were tasked to figure out that his middle name was CLARK, so it was fresh on my brain and i got a little bit of a chuckle out of seeing CLARKE in this week’s grid. the grid’s two 7-letter answers are ALL TALK and the aforementioned LA BELLA; despite the latter’s unfamiliarity to me, i’m overall quite impressed by these, as they were both constrained to be six-sevenths BLACK by the meta.

that’s all i’ve got this week. how’d this one treat you?