Each theme entry is clued with a component of what is considered a strong password. But the meanings (and sometimes the pronunciations) of said clues are not what we might expect. 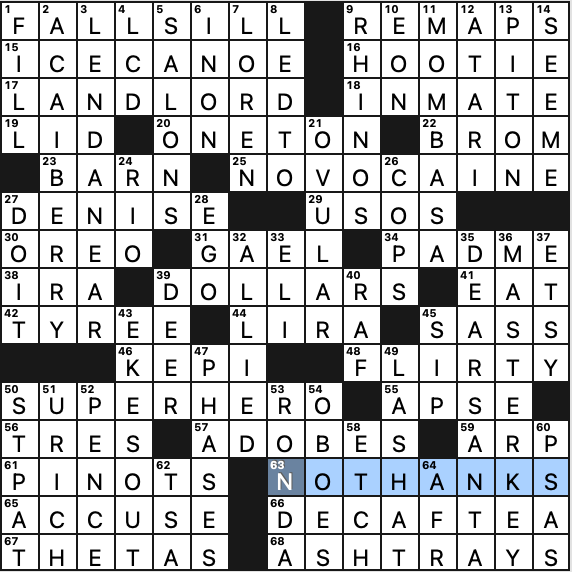 This feels very confused and confusing. We have differences in meaning, differences in pronunciation, and a re-parsing in the final clue. And above all, I’m not seeing a rationale for why all this is occurring. I wanted something to tie it all together, but it’s just not there.

There is a lot of nice fill, however, such as LEND AN EAR, DEAR SANTA, MASTER KEY, MOMBASA, DECAF TEA, and ASHTRAYS. There were also some eyebrow-raisers as well. I’d never heard of an ICE CANOE [Winter race vehicle], but it’s interesting to learn about the sport. Didn’t know [Manning’s “helmet catch” receiver] was David TYREE (here’s a video of the play which starts at 1:13). And LASH AT is yet another preposition-ended phrase I’d rather not see. It’s also probably time to let go of Robert URICH [Robert of “Vega$”].

There are some definite assets to this grid, but the theme left me scratching my head. Three stars. 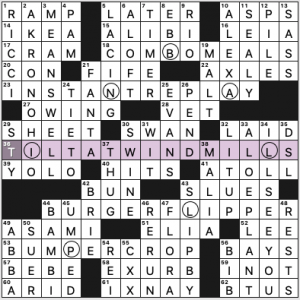 I paid no mind to the theme and forgot to eyeball the circled letters to see what the theme was until after turning here to start writing. Oh! Circled letters spell out PINBALL and I guess there are pinball-related words within the five longest answers:

The pinball-related words sort of pinball back and forth between being the first word in a themer vs. the last. You’ll need to supply your own bells and lights for the full effect. I think the circled letters are meant to look like you hit the ball with the flipper down at the bottom (P), sending it ricocheting off the left wall, arching up towards the top and bouncing off the right wall, then zooming straight towards the Pit of Despair in the bottom middle. Neat theme. Certainly not one of those “variation on a common theme” sorts of puzzles.

Editor: Erik Agard
Theme: The theme answers are all two words, the first of which ends in HI and the second of which begins with P. 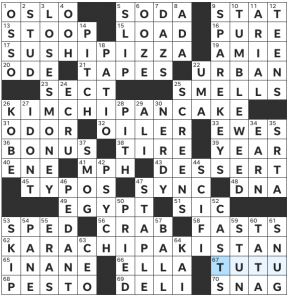 Is “hip bridge” a thing? I’ve only ever heard the stretch called “bridge pose” in yoga. Anyways, the HIPs do successfully bridge the two words, so that’s nice. I liked how the first two theme answers were both foods with an element of fusion, which led a fun double meaning to the “bridge” part of the title. I was a little disappointed when KARACHI PAKISTAN was the last one, as I was hoping for another food answer.

I’ve gone on record at this point saying that I don’t love puzzles that are asymmetric for no real reason. Today, the top middle of the puzzle feels very closed off, likely to accommodate the two Z’s in that area. I can understand the desire to keep the fill clean, but it made the puzzle feel choppy to me today. Surely there must have been some layout that was a bit more open? That being said, it did give us the stack of SPARE KEYS and TUMBLEWEED, so I can’t be too upset. 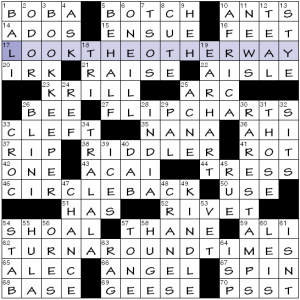 I figured out the theme gimmick about halfway through the solve, but then it turns out that the final theme answer provides a nearly explicit explanation, which for me—let’s say a veteran solver—diminishes the fun. But I can see how more casual solvers might appreciate it.

As you can see, these are all reversals—peek, maps, loop, and ages. The answers are all fantastic. These could all be elements of excellent cryptic clues; one needs only to add the definitional component. 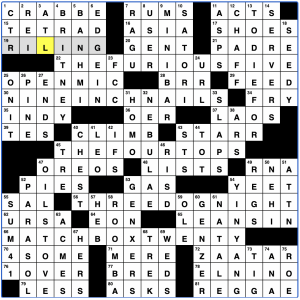 Pao Roy’s AVCX was right in my guy-on-your-trivia-team-who-can-identify-all-the-songs-in-the-music-round sweet spot:

There was something that felt slightly anticlimactic about realizing that the total of all the numbers in these groups names wasn’t getting resolved in 66A, then realizing we had two numbers in the corner of the grid, rebus-style, but overall I liked this a lot. 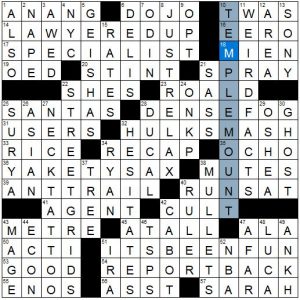 This played about as the old Friday slot did, so a chunk quicker than the last few Wednesdays I’ve had. I was able to move pretty easily from long answer to long answer, so it feels like a colorful grid with fresh entries that don’t compromise the fill by being too sparkly, but I admittedly didn’t have to punch through short stuff to get crossing help as much as I might in other themelesses.

JUST RELAX and HESITATES do a lot of work in the connectivity here, and while I like the clue for the former ([8d “Don’t have a cow”]), my favorite access to the middle came from YAKETY SAX [36a Novelty song that often accompanies sped-up chase scenes] and HULK SMASH [32a Line from a green superhero who’s seeing red]. HULK SMASH is particularly fun in my mind because red is just not a color I associate with him – green of course, but also purple/blue clothing.

LAWYERED UP [14a Got an attorney] is a fun phrase. I have no idea how popular it is — I knew it — but it’s an example of verbification that I think has held up well in casual use. 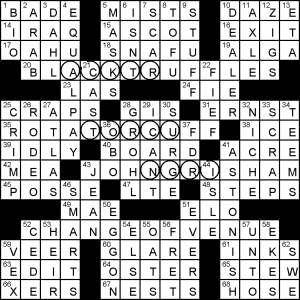 Today’s crossword theme by Susan Gelfand features a well-worn concept: scrambled words spanning the centre of two-parter theme words. The connections between all the theme’s working parts seemed a tad on the loose side. The revealing answer, CHANGEOFVENUE, implies anagramming the circled letters, which all spell out >sports< venues: TRACK, COURT and RING. These are in the middle of three longer words:

The grid design, at 42 squares, in part because of the revealing 13, is quite constrained, particularly in its centre. The advantage in construction is each area can be reworked separately. The disadvantage, especially in harder puzzles, is the solver may find it hard to break into areas.