IT’S DISCONNECTED is the revealer today (39a, [“Check the plug!” (and a hint to solving four rows in this puzzle)]). Said rows have one black square separating two entries. The solver must imagine the letters DIS residing in that square in order to satisfy the left-most entry’s clue. The right-most entry is clued normally. 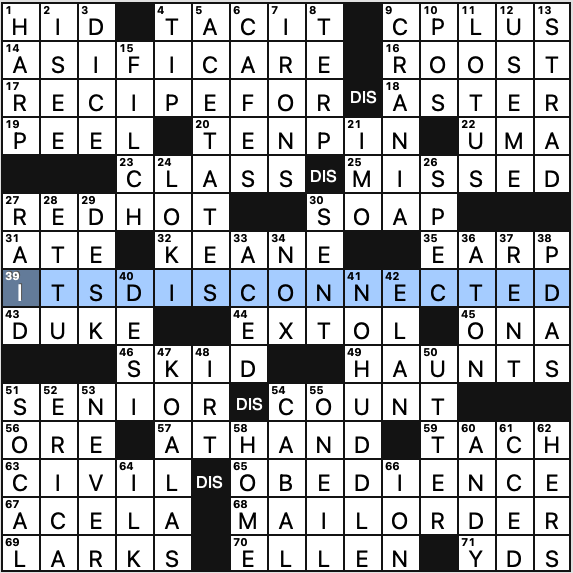 Nicely done. I enjoyed sussing this out. I especially liked how the letters after each DIS comprise their own standalone words and are able to be clued without a hint to their participation in the theme. It adds just a bit to the challenge and makes for a more elegant solve.

I’m only lukewarm toward the revealer, though. It’s not really such a common in-the-language phrase, but I get the wordplay in that the two entries in each row are DIS-connected.

I guess the sign maker didn’t think too much of the survey.

Moving on, I had a tough time in that NE corner where I really wanted A-PLUS for the clue [Above average, technically]. It’s that “technically” that eventually made me realize the first letter wasn’t going to be A. The 9d crossing [Head cases] seemed like it wanted something ending in -MANIA. Adding to the difficulty was 10d, clued [Payment place, briefly]. I initially tried ATM (which, I know, is not a device for making payments), but it ended up being POS which we don’t see clued as an initialism very often. In this case it stands for Point of Sale…and not the other thing.

As for fun fill we have a NO-HUDDLE offense (football), “AS IF I CARE,” MAIL ORDER, RED HOT, and KOALAS. For those of you who loathe Harry Potter, you can be satisfied that FILCH was clued as a verb, and not the caretaker of Hogwarts. 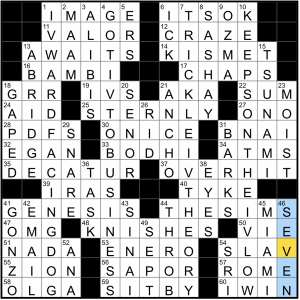 After yesterday’s fantastic puzzle for the AV Club, Pao Roy is already back with another great grid for the NYT.  This one needs a little more that explaining when read left-to-right.

each of the IVs, when read from top to bottom, looks like a DOWN arrow, filling in for that word in the phrases DOWNWARD FACING DOG, GOT DOWN TO BUSINESS, TRICKLEDOWN THEORY, and KEEPS ON THE DOWNLOW.

The cluing throughout this puzzle had a real freshness to it that I appreciated, as did the fill – this was right on my wavelength.

THEME: Phrases where the last word is an element of a crossword puzzle. 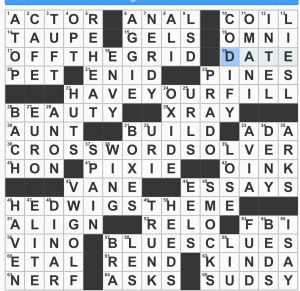 I’m not a big fan of crossword navel gazing. Universal does this with some frequency (once cluing ART  as [Crossword construction, for one] or something like that), and it makes me cringe. This theme doubles down on that conceit and it falls flat for me. I mean, it follows all the conventions of a theme that’s just fine (last words in common phrases have something in common…), but if you’re going for something that self-referential, then the THEME better *wow* the CROSSWORD SOLVER (an entry that I don’t really consider a stand-alone in-language phrase).

But this is a theme that’s for solvers. It doesn’t necessarily invite people on the crossword train. It’s rather a wink for those who have been on board for a while and are having lunch together in the dining car. I just asked several people (adults) sitting around me if they know what FILL is with respect to crosswords. They did not. One inferred that it was just all the words in a crossword, but did not differentiate from THEME. To that point, many less-than-casual solvers may understand the concept of THEME but may not think of it as an element in the same way that they would think CLUES as one. I mean…THEME is not a necessary element, as anyone who solved the recent Saturday and Sunday 15x Universal puzzles could attest to.

Anyway, I don’t mean to sound overly negative. This is constructed fine and has fun with its clues. NERDY and BOXES caught my eye as sub-theme entries (although BOXES is not clued as such). Also liked the clue for ACTOR [One who’s a different person at work?] which is a fun way to start a puzzle.

This idea is bound to delight some, who are going to enjoy the wink and like the idea of being “in on the joke.” I can’t help but roll my eyes when a meta theme like this is presented to the masses. 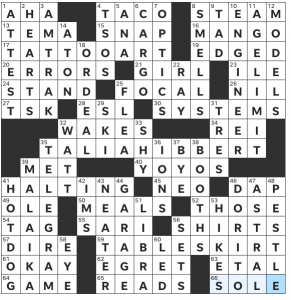 Cute theme! The TABLE SKIRT clue is surprisingly tricksy for USA Today and I’m here for it. I’ve never heard of TALIA HIBBERT before but all the crosses on her name are fair, and now I want to read her books. I signed up to do a “read 10 books by the end of Q2” challenge at work, so I’m in need of recommendations.

Speaking of work, I have to get there soon, so here’s a few more things about today’s puzzle: 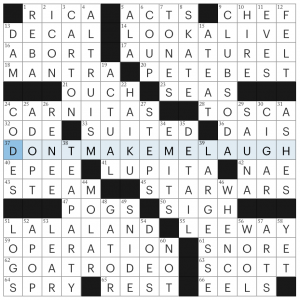 Good morning, besties! I was nervous about this puzzle because when the grid is split up into sections like this one is, sometimes I can get stuck. But this was a breeze! (Except I didn’t finish actually… had the OU of COUP and couldn’t fill in the last two boxes. The Book of Arts? The Book of Ants? etc.)

I was frustrated with this puzzle. Some theme answers have rebuses and some do not, and until I wrote this review I thought that was random. There is a pattern that I eventually figured out. In addition, all the theme answers are movie titles and one of the rebus crossings was unfair for those of us who are neither movie buffs nor jazz aficionados. 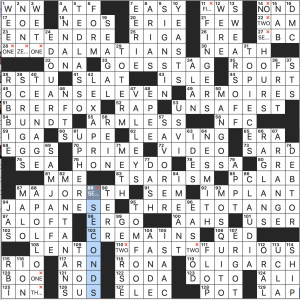 So then I went back and looked at the NW knowing the rebus squares would be ONE, ZERO, and ONE. [Positive or negative] is NON–ZERO. 1d [Little kid] is WEE {ONE} and 3d [Messy kiss] is WET {ONE}, which is also a dupe, by the way. And it finally dawned on me as I was typing out the titles that the rebus squares appear in titles that include the numeral and the non-rebus answers are titles with the number written out. That’s less frustrating and definitely more fun – and I probably would have figured it out earlier if I’d seen any of these movies. The only ones I’ve even heard of are 101 DALMATIANS and 127 HOURS. That’s on me, not on Peter; it’s a really good theme. I still say the rebus crossing at 89d is unfair, though.

Oh, and there’s a revealer: 70a [With 72-Across, streaming service on which it would be apt to watch the films in this puzzle] is PRIME VIDEO.

What I didn’t know before I did this puzzle: pretty much anything about most of the theme answers. In addition, I didn’t know there was a RAPper named Q-Tip or a physicist/author named ALAN Guth. 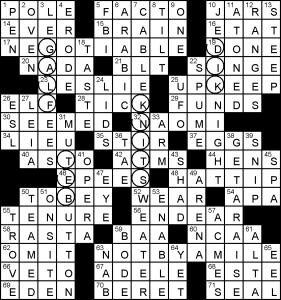 It’s lovely to have another C.C. Burnikel puzzle so soon. Today GETARAISE, [Start to make more money, and what the circled letters do?] is the revealing answer, and, in the four longest vertical answers, there are circled letters that spell out, backwards, words that can be “raised”. These are FLAG, BET, STINK and KID. Shout out to our Dave who has raised some beautiful kids!

The entries themselves are:

There were a couple of less encountered proper names to note for the future:

Sorry for the late post, y’all. It’s been a busy day.

Theme: As pannonica noted in the comments, “POST (=”pole”) has been inserted into the originals.”

I appreciated the Cleveland baseball reference in 34a [“Stat for a Guardian”] RBI, as well as the other baseball reference in 22a [“Prepare to advance on a sac fly”] TAG UP. The use of TIME PERIOD to switch up the crossword standard of 29d [“Era”] was pretty fun as well. Also – CUTENSIL is an adorable way of describing a 39d [“Kitchen implement with a novelty design, e.g.”].

I think that 24d [“Outrageously dressed Blacksploitation character, maybe”] PIMP was an attempt to call attention to Blaxsploitation films, but I would have liked to see “Blackspoloitation” spelled with its X and maybe to avoid PIMP as part of the fill.

Overall, I liked the pattern of the grid structure and am looking forward to understanding the theme more. Stay tuned.