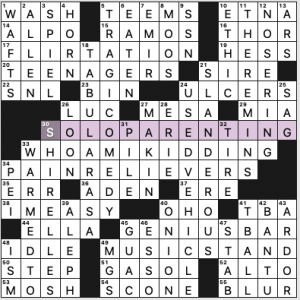 Can I just say I appreciate this constructor’s name, with its pair of consonant twosomes not commonly found in English? HSIUNG WOJCIK would look amazing in a grid! Moving beyond the byline, her actual puzzle is great, too.

This one played pretty easy for me. Not as easy as the Thursday meant-to-be-easy New Yorker themeless, but easier than most NYT Fridays. Puzzles with lots of proper nouns in the grid tend to fall quickly for me. Your mileage may vary.

Theme: Each theme answer has CAR filling in between two words.

We got four themers in this Friday puzzle, which is very fun! I think to some extent that really meant that Mikkel and Brooke had to keep it tight around those themers, hence our diagonal moves through the middle section of the grid. As for the themers themselves, I loved MONICA RAMBEAU since I’m a huge Marvel fan. BBC ARABIC took me a hot sec, but it quickly fell into place, as did ELECTRIC ARCHES and YUCCA ROOT. Speaking of YUCCA ROOT, it is used in Keshee, the Navajo Shoe Game, which involves players guessing which of several moccasins have a yucca root ball in it. It is meant to symbolize life and the idea that the natural order of things cannot be altered. You can learn more about it here.

This grid is asymmetric, which we can see most clearly in that the northeastern steps don’t have a twin anywhere, just as the right bottom corner is a lone buddy hanging out and holding USA and TEA together. I particularly enjoyed 43d [“Angelique Kidjo genre”] AFRO POP and 44a [“Member of a pride”] LIONESS, as well as the fun clue for EEL in 29a [“‘Shock me like an electric ___’ (MGMT lyric)”] and the cute clue for 34a [“Internet award (or a name for a pet spider”] WEBBY. Honestly, while I wouldn’t call myself Spider-Fan, I would say that’s my favourite clue/answer combo from this puzzle.

Some other things I noticed:

That’s the end of my mental ROAMing for now. Have a good weekend!

The revealer is “COME ON DOWN!” (34d. [“The Price Is Right” catchphrase, or a hint to the meaning and direction of each starred clue’s answer]). Each of the other theme answers is a phrase roughly synonymous to “Come on!,” and they’re all in the Down direction. 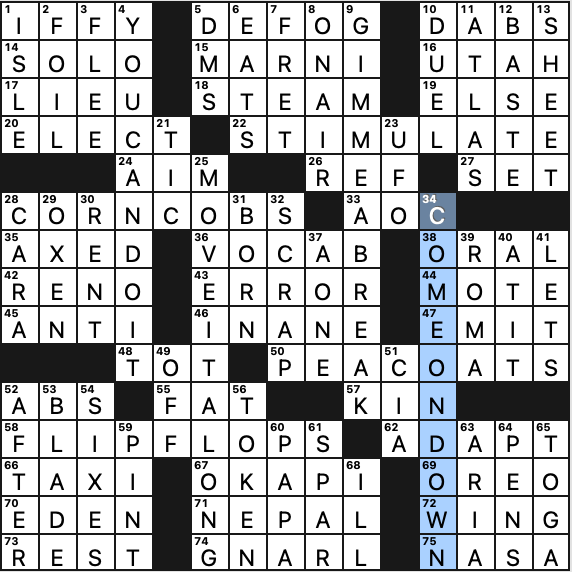 Very nice theme. It took a second to make sense of that revealer clue, but then I was afforded a nice aha moment. I especially like the fact that each “Come on” has a different meaning. And I further like the title with its play on words (“Lines” meaning “phrases”.) Overall, a fun and lively theme.

Nice long fill, this time in the Across direction. We have STIMULATE, CORN COBS, PEACOATS, and FLIP FLOPS. Nothing in the fill slowed me down too much. I didn’t time myself, but it felt like a fast, smooth solve. 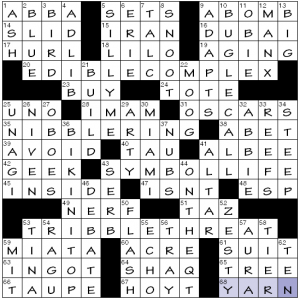 Ok, sure, this works.