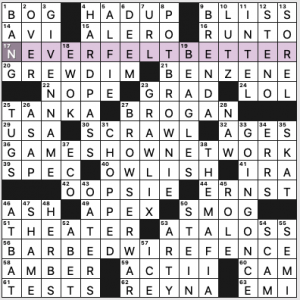 This puzzle played like a more-difficult-than-average Saturday NYT. The 1a/1d pair stopped me cold, so I had to start elsewhere. [Certain archaeological site] seemed worded in such a way as to rule out DIG, and I couldn’t think of a D word that fit the clue [When doubled, attention-grabbing]. Eventually I came back to finish the corner from the bottom up, with a BOG and BANG-bang.

Less keen on AVI-, ALERO, ERNST, OATERS, and STENO, along with verb + preposition/adverb phrases HAD UP and RUN TO.

Did not know: 13d. [Philosopher Georges], SOREL. I do know the Sorel boots brand, and bought some Sorel slippers in Minnesota. Georges here apparently was a theorist of revolutionary syndicalism, about which I know nothing at all. I’ve likely seen 25a. [31-syllable Japanese poem], TANKA, before, but needed all the crossings here. 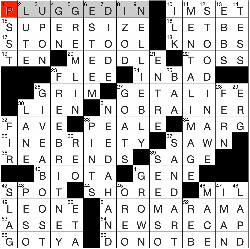 Uh-oh…that’s two sub-three-minute Saturdays in a row. I do hope this isn’t an indication that the Varol era means the LAT themelesses are going to get easier! A gal needs a workout sometimes. That being said, there are some nice highlights here:

No slop in this grid to complain about. But I want some harder clues! 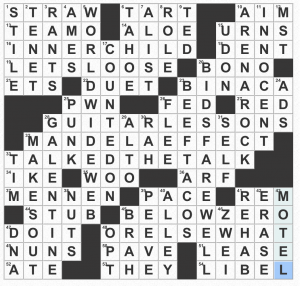 I totally forgot GALENTINE was a thing… so I got hung up there for a while. I remember hearing that term some years back, but haven’t heard it since. Is that still a thing? Regardless, I enjoyed uncovering it!

I’ve seen PWN before (often!), and understood what it meant in context, but by itself, I’m totally lost as that what it means. I’m not a gamer. Looks like it derives from “Pawn” as a verb, and you would used in the sense that you dominated someone in a game: I totally pwned you! I am aware of how out of touch I sound with that last paragraph. I’m starting to come to terms with that.

BINACA is totally new to me too! I’ve never seen it, used it, or heard of it. I have a feeling I’m alone there.

A couple longer entries didn’t excite me that much: WORLD WIDE WEB and BIDS FAREWELL are awfully old-timey as symmetrical pillars. I mean, as often as we see/use www (I would say most of us don’t even type that anymore), what it actually stands for sounds very… dated. Also GUITAR LESSONS felt a bit bland, though it’s perfectly valid and is the top layer of a solid trip stack.

Have a good weekend! 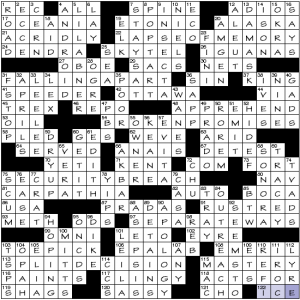 This is an interesting theme that even manages to make cross-references tolerable. The theme entries direct solvers to a pair of other nearby entries that themselves are separated by a single black square. Read together, those words form a new word which is accurately described by the themer.

Really, that’s just fantastic as a concept and in execution. And everything’s symmetrical too. 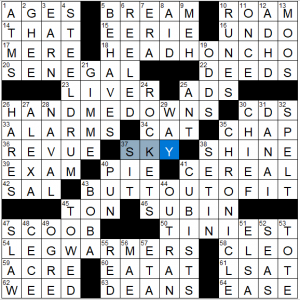 Themers begin with body parts one can “shake”

Fun theme set. On to notes:

This was another killer workout, this time (rightly) under the S.N. moniker, unlike last week’s supposedly less rough offering.

My first entry into the grid came at 11d [Mighty Dump Truck maker] crossing 19a [Sanctions]. I was able to confirm the crossing K of TONKA and OKS, but was unable to get any other answers in that area.

Next, I found a good B crossing at 38a [Are assets of] BELONG TO and 38d [West Coast state, familiarly] BAJA (after considering but taking a risk on dismissing CALI). Was helped here by 45a [Seventh century pontiff]—LEO would’ve required a three-character Roman numeral such as VII, which seemed unlikely, and the P in PIUS or the U in URBAN didn’t seem to work. I decided on JOHN IV. Looking at Wikipedia’s list, I discern that the only other six-letter name is AGATHO, so whew.

With an N and I in place, I was able to guess 31d [“The Queen of Country”] as Reba MCINTIRE. Eventually I was able to connect the northeast to the southwest and at 24-something minutes my grid looked like this: 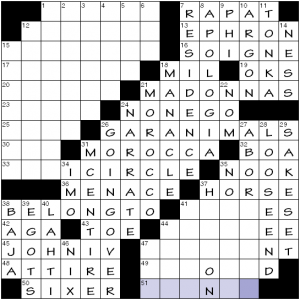 There’s a nifty intersection in the center of MOROCCO and MO ROCCA. 21d [#1 in African tourist arrivals], 31a [“Sunday Morning correspondent].

My first idea for 37a [Hiding place for Achilles] was the famous episode among the daughters of King Lycomedes. I thought it might be HAREM, even though that isn’t a Greek word. From there I reasoned that the H for 37d [Don’t let go] was going to be either HANG ON or HOLD ON, so I put in the ON.

41a [Goes toward a gate] gave me a terminal S and I deduced that 29d [Certain carafe + cups] would be a SET of some sort. Scrapping HAREM for HORSE (as in the Trojan Horse) made SAKE SET more obvious. Obviously then 35a [Recess] was neither APSE nor REST but NOOK. Next I looked at 51a [Port named for a war god] and after abandoning Ares I though of Odin and then recalled ODENSE in Denmark. Finally I could slowly stitch together the last of the southeast zone. Turned out that 37-down was neither of my supposed possibilities: HARP ON. 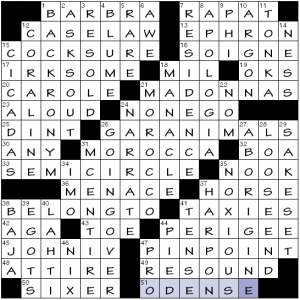 That left the northwest—where I had zero intrinsic toeholds and was stymied by the lone entry point, 33a [Most of westernmost Detroit], where I had –––ICIRCLE. With time dragging on I took a flyer on SEMICIRCLE (which I still don’t understand even after having looked at some maps of the city).

And then I really had to sludge and drudge my way through that final section. There were lots of maybes and possible letters and had I been solving on paper with a pencil I’m sure there would have been plenty of erasures. 25a [Exertion] DINT.

15d [Hummers in summer] CICADAS. Ever since I first read John Banville’s description of their emanations as crepitant, that’s been my own go-to word as well.