Hi, everyone! Before I dive into today’s puzzle, I wanted to respond to a note from last week’s comment section:

By far the worst Sunday XW my wife and I have worked on. To be clear: We’ve solved 0ver 400 21×21 puzzles from the NYT, and this was the worst of them. There are too many reasons to list — I suggest you read over “Rex”‘s critique. But Nate, you don’t do yourself any favors by pretending not to notice how awful puzzles are. I appreciate that you want to be kind; so do I. But criticism has to be able to point out what makes things good vs bad. This puzzle was just awful, and the readers’ ratings seem to agree — has there ever been a puzzle so low-rated? It’s currently below 1.65.

So, here’s the truth. For as positive as I am in my puzzle reviews these days, I was often quite negative (and publicly so) about puzzles in the past. In a previous era of Fiend, I used to excoriate puzzles for how few women they featured and how bland their fill felt… but it didn’t really lead to much change and only increased the negativity in me and in crossworld. At some point during the COVID era, I took a big step back and decided that I didn’t want to be part of the negativity. Instead, I choose now to focus on the positives when I can and to look at puzzles from the points of view that make sense to me – as a constructor, as a solver, and as a human who knows how hard it is to make these puzzles, only for them to be ripped to shreds.

Don’t get me wrong – I still critique these Sunday NYT puzzles when they include fill or clues that I feel are unbelievable in the era of modern puzzling, so I don’t think I could be accused of being soft or too kind, even these days. It’s just that there’s already so much negativity, and I don’t want to be part of tearing down others’ creative processes anymore. Plus, folks honestly don’t need me to say how bad a puzzle is, especially if they’ve just solved it. But, if one is indeed anxious to hear someone read a constructor the riot act for a puzzle they built and were lucky enough to have published, well, I’d respectfully echo back some of your own advice: I suggest you read over “Rex”s critique. Now, onto the puzzle:

Mayday, May Day! Today, we have a 23x(!) grid to fit this constructor’s ambitious theme. Adjust your average solve times accordingly: 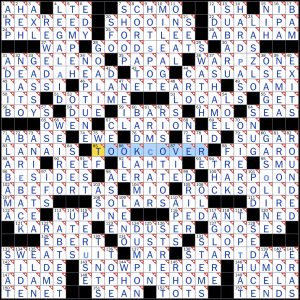 Each of this puzzle’s 14(!) theme entries is a two word expression where the solver must leave a blank between the two words. Then, a letter can be entered into the blank space that transforms each of the theme entries into a new entry. What do those letters spell? Why, a literal indication of what you had to do in the first place: SPACE OUT. Wow! ::mind blown emoji:: For me, this was an impressive feat of puzzle making and fun to solve. I enjoyed so many of the themer transformations, with ARM(C)HAIR and SWEATS(U)IT perhaps being my favorites (or at least the most unexpected). I will admit that I blushed when I saw the transformed entry at 72D! Wow at the constructor for getting that through the editing process – I don’t know that I would have been as brave.

Other random thoughts:
– 24A: PHLEGMY [Stuffed up, in a way] – I couldn’t have spelled this correctly on my own if my life had depended on it!
– 27A: WAP [2020 #1 hit for Cardi B and Megan Thee Stallion] – Whoaaaaaa, the constructor got this in the puzzle, too!? I’m impressed. A NYT three-letter entry debut!
– 44A: CASUAL SEX [Flings without strings] – Okay, I’m starting to see a mini-theme to this puzzle. The puzzle certainly seems to be catching up to modern times and vernacular and isn’t as ashamed about it.
– 34D: NEPTUNE [The eighth of eight] – #justiceforpluto
– 75D: WTF [“___ With Marc Maron” (popular podcast)] – I was pleasantly surprised to see this one, too. Another NYT debut! Two three-letter debut entries in one puzzle? That’s quite a feat!

That’s all from me for now. What did you enjoy about the puzzle? When was your AHA moment that made you realize the spacing twist to this puzzle? Let us know in the comments below. And have a great start to the month – rabbit rabbit! 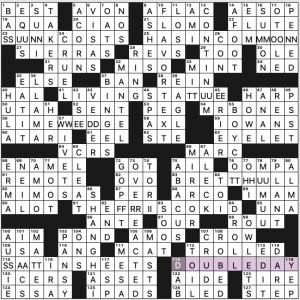 Amy here, filling in for Jim Q, whose dog ate his homework. I confess that I’ve rarely ever done the WaPo crosswords—my full-time job is crosswords, and the crosswords I enjoy doing the most are themelesses, so I mostly just solve the NYT days that I blog, some of the themeless New Yorkers, and the occasional indie puzzle (AVCX, Inkubator, Fireball, and of course MGWCC). A 21×21 puzzle is no longer my idea of an appealing leisure pursuit. But Jim needed a sub, so I figured, why not.

The title is “Two-Timing,” so when I knew Peter OT{OO}LE had to fit at 17d and SU{MM}ON made sense for 16d, I guessed that the “times” we were “twoing” were abbreviations for the days of the week. Indeed, that’s the game, as confirmed by the revealer, 118a. [Publishing company whose name serves as a hint to entering several Down answers in this puzzle], DOUBLEDAY. The Acrosses with the days in them only need each letter once:

Solid theme, and easier than I’d have expected for a rebus puzzle. I think the other day rebuses I’ve seen have put MON, TUE, etc., into rebus squares rather than going with this DOUBLEDAY approach.

Solid fill throughout. Four stars from me.

Today’s theme: Phrases that hide world currencies within, as indicated by the circled letters. These phrases start in the Across direction, turn Down at the currency, then turn again to finish Across. The currencies are also part of longer Down answers. 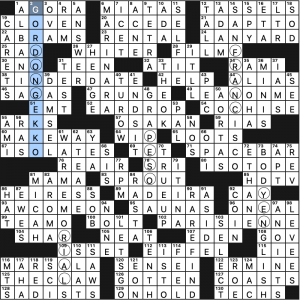 To be honest, I completely ignored the theme with all its cross references during the solve. Thus I thought the theme was fully encapsulated by the long Down answers which seemed to satisfy the puzzle’s title. So finding the turning Across answers post-solve was a bit of an aha moment.

This must have been a difficult construction with all the turning going on and the long Down entries in on the theme. That’s more than the usual amount of constraints to put on the fill.

Yet, again, I was surprised post-solve because I didn’t realize all that turning was going on, and the solve felt smooth and easy. That’s a testament to the amount of work the constructor put in to make it that way. Nicely done.

So yeah, there’s plenty of enjoyable non-theme fill here: TINDER DATE, PARISIENNE, SPACE BAR, “AW, COME ON!,” “LEAN ON ME,” EAR DROP, MAKE WAY, RARE FIND, MARINARA, MARSALA & MADEIRA, and SADISTS below THE CLAW! And nearly all of those cross a theme entry at some point.

Jim P. here sitting in for Jim Q. In today’s Universal puzzle, each theme entry is a relatively familiar phrase whose first word can also be a division of time/play in a certain athletic competition. 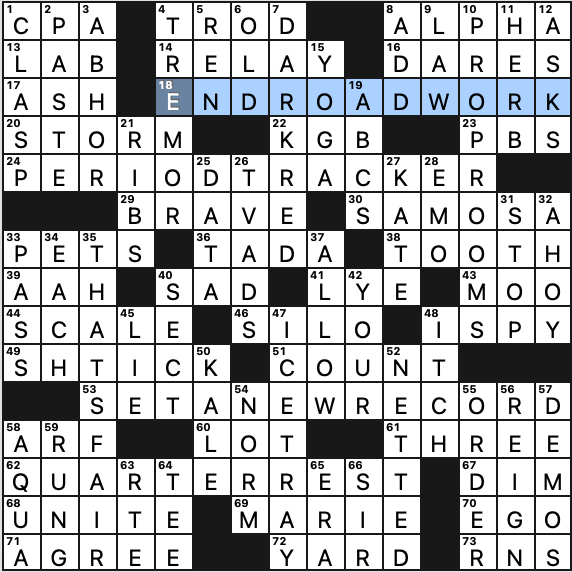 I finished the grid without realizing what the theme was and stared at the entries for a minute or two. Finally, I looked at the first clue and realized what was going on. But starting off with curling is a questionable call. Maybe it would have been helpful to put the sport in parentheses at the end of each clue, not just the first one. That would’ve helped cement the theme in the solvers’ minds.

Top fill: “THAT’S FAIR,” ICE TRAY, DARK RED, PROP ROOMS, and SHTICK. As usual in a Burnikel joint, there’s little to no gunk though there are the usual bits of crosswordese like EMO and AAH.

I can’t say I was too enthused about this theme, but the grid is solid. 3.25 stars.

Theme: Each theme answer is a person with a color in their name. 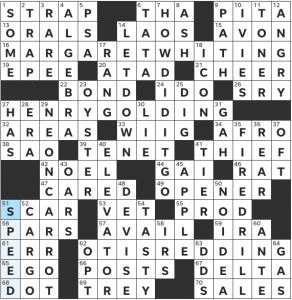 A very name-driven theme, which, if you haven’t noticed by now, is not my strong suit, but regardless, I still really enjoyed this. I was most unfamiliar with MARGARET WHITING, who I also found to be the most intriguing of theme answers given that the full color “white” does not appear in this puzzle, though, of course once you pronounce her name aloud, “white” is very apparent. I love OTIS REDDING, and it took me a few crosses to finish HENRY GOLDING, but I got there eventually. It’s also worth noting that all three of these answers ended in -ING, which I imagine could have been difficult when first laying out the grid. 33a [“‘Barb and Star’ star Kristen”] WIIG also felt like a bonus, though, of course, she’s not a colorful character, at least not specifically in this puzzle.

Lots of really fun longer answers: NEON CARROT, HOW DID IT GO, and FIRE DRILL. It felt like a very free-flowing, open grid, with that smattering of black squares in the center.

Overall, I really enjoyed this theme and thought it was super fun and creative. I mean, who doesn’t love a colorful puzzle?