This week we’re looking for a musical term. There were seven starred theme entries:

I ran down a few deep rabbit holes, spotting TRIAD (clued as “Common chord”) and GIRTHS (“Middle measures”). I threw in ONE for good measure (“It shares a key with an exclamation point”). Those seemed important. I Googled triad, chord, key, and measure and threw these into my notes:

I stared at the themers, trying to find a common thread in the grid. THERED was odd fill. I applied triads (skipping the 2nd and 4th entries in various entries). The theme clues were vague and could probably be applied to other entries (a time-honored meta mechanism). TIARA seemed like a better entry for bejeweled topper, and DOCENT kept leaping to mind as an alternative answer for museum worker. I took the obvious step of looking for those in the grid. They weren’t there. Well, part of them wasn’t. 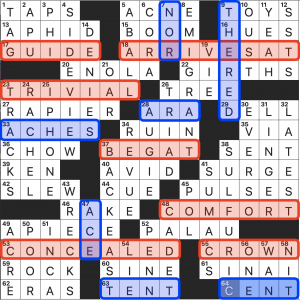 I slept on it and woke convinced that the vague clues were important. I re-checked the center and final horizontal entries (common spots for meta-relevant content). I spotted CENT and had the rabbit: DOCENT was there once I appended Do. The rest fell quickly:

The first letter of the mapped grid entries spell CANTATA, our contest solution. I am curious about TRIAD and GIRTHS. Matt Gaffney has often said that he doesn’t intentionally include red herrings in his grids (they sporadically occur on their own). Mike hasn’t weighed in on the subject to my knowledge (solvers: please let me know if he has and I missed it), but I imagine he’s in Matt’s camp. Either way: it was a great “aha” moment with a 100% lock. Solvers: let me know how you made out, and all the rabbits you chased.

It goes like this, the fourth, the fifth, The minor fall, the major lift. That ran through my brain as I chased red herrings. Leonard Cohen’s Hallelujah has been covered roughly a bazillion times. I like this version by Vektormusic.